Saidu Yusuf and his twin brother, Saadu Yusuf  are identical twins with a rather interesting life that they share together. Apart from being identical twins, the Jigawa State-born duo married twins from Daura, Katsina State; hometown of the President, Maj.Gen. Muhammadu Buhari (retd). The twin sisters also bore twins for them.

Speaking with Saturday PUNCH, Saidu said between the twin sisters, he is married to Hassana Iliyasi while his brother’s wife’s is Hussaina Iliyasi.

“We are twins and married to twins. By tradition and Islamic background, we underwent different Islamic schools.

We later proceeded to the Federal School of Medical Laboratory Technology (Science), Jos, for additional training. We practise as medical laboratory scientists.

“We are from Jigawa State but born and raised in Jos. Our childhood was smooth and fun. We were obedient and people loved our ways because of how we were raised. We never used our being identical to play any pranks on anyone.”

On his part, Saadu said growing up they desired to marry twins but unsure of how the desire would be realised.

“We actually desired to marry twins as twins too. But we knew that it was only a desire and only God could make such to become a reality. We had non-twins as girlfriends.

But how we married twins was God’s plan. It was sudden and beyond our understanding.

“It was in January 2014. A man called Mallam Zakariya linked us with our twin wives.

They are from Katsina State, precisely from Daura (hometown of the President, Maj.Gen. Muhammadu Buhari (retd).

Zakariya was a friend to the elder brother of our wives. We later met with them and some months, we got married on August 30, 2014.  We married the same day and it was a remarkable day for us.”

Saidu said as identical twins, they were greatly happy when their twin-wives were delivered of twins. 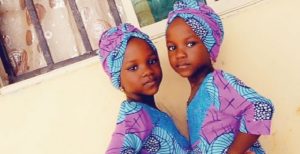 ‘Love Isn’t Enough’ -Nigerian Man, @Pellentini Writes On What Counts When It Comes To Sustaining A Marriage

Speaking about the gender of the babies, Saadu said his wife gave birth to female twins named Nasibah and Nusaibah on June 15, 2015, while his brother, Saidu’s wife was delivered of male twins on June 17, 2015 and were christened Sahl and Suhail. 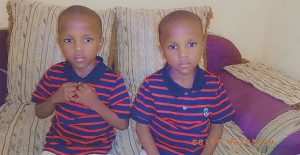 “We studied the same course so that we wouldn’t be separated while schooling. We never fought for once, however, we do have different opinions on some issues but such would never affect our daily routine or interactions.’’

In a brief, recorded response to questions sent by our correspondent, Saidu’s wife, Hassana, said she and her twin sister were born and raised in Daura town where they also attended primary school.

She added that they attended the Government Girls Secondary School, Ragogo, Katsina State and the Yusuf Bala Usman College of Legal and General Studies, Daura, where they studied Hausa-Islamic and graduated in 2014.

“We are extremely happy, proud and feel lucky to be married to twins like us.’’