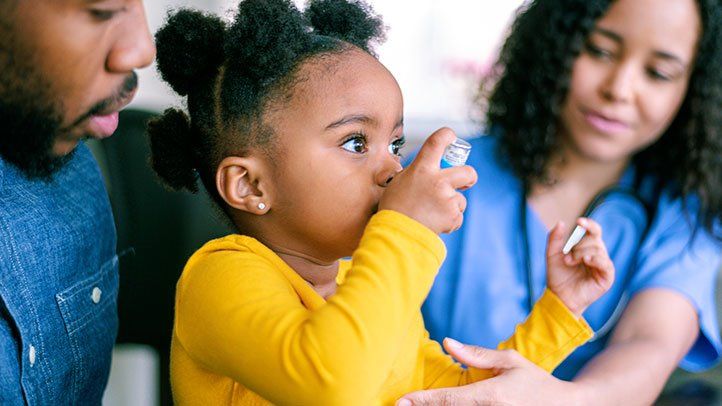 Children exposed to higher levels of fine particles in the air (known as PM2.5) are more likely to develop asthma and persistent wheezing than children who are not exposed, finds a new study published by the British Medical Journal BMJ on August 19, 2020. Other risk factors associated with a higher risk of developing asthma and persistent wheezing were having parents with asthma, having a mother who smoked during pregnancy, or having parents with low education and low income.

These findings support emerging evidence that exposure to air pollution might influence the development of asthma, say the researchers. PM2.5 can come from various sources, including power plants, motor vehicles and domestic heating.

The particles (about 3% or less of the diameter of a human hair) can penetrate deep into the lungs and some may even enter the circulatory system. Short term peak exposure to air pollution has been associated with worsening of asthma, whereas the risks of long term exposure and the timing of exposure for the onset of asthma is less clear.

In addition, the role of air pollution combined with other risk factors, such as socioeconomic status, on asthma is unclear.

So researchers in Denmark set out to identify risk factors (air pollution and family related) for the onset of asthma and persistent wheezing in children.

Their findings are based on more than three million Danish children born from 1997 to 2014 and followed for asthma onset and persistent wheezing from age 1 year to 15 years.

Of these, 122,842 children were identified as having asthma and persistent wheezing (at an average age of 1.9 years).

This information was then linked to detailed air pollutant measurements at the children’s home addresses, parental asthma, maternal smoking, parental education and income.

After taking account of other potentially influential factors, the researchers found higher levels of asthma and persistent wheezing in children of parents with asthma and in children of mothers who smoked during pregnancy.

In contrast, lower levels of asthma and persistent wheezing were found in children of parents with high educational attainment and high incomes.

This is an observational study, so can’t establish cause, and the researchers point to some limitations, such as a lack of information on nutrition and physical activity, and factors related to the children’s indoor environment.

However, strengths over previous studies include the large unselected number of children across all social classes and in a broad age group, and the use of high quality comprehensive data to minimise bias.

As such, the researchers say their findings

“support emerging evidence that exposure to air pollution might influence the development of asthma.”

While this finding needs to be substantiated in future studies, these results suggest that further reductions in PM2.5

“might help to reduce the number of children who develop asthma and persistent wheezing in highly exposed populations,”