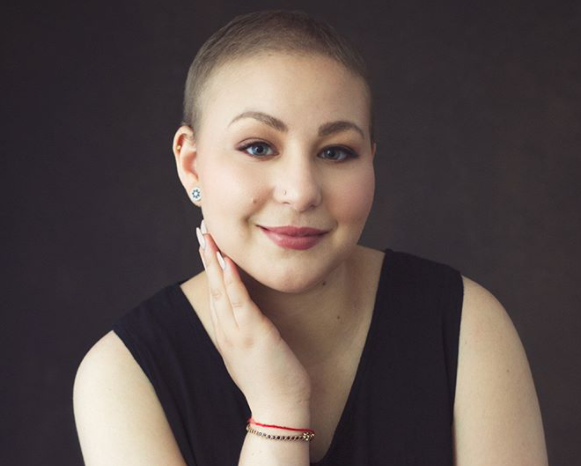 Lindsey Finkelstein, a 26-year-old breast cancer survivor is reminding young people that it’s never too early to get checked in honor of Breast Cancer Awareness Month.

Finkelstein, a blogger and small business owner from Montreal, was diagnosed with ductal carcinoma — one of the most common forms of breast cancer — on Oct. 7, 2016, when she had just turned 22.

In January 2016, just ten months prior to the life-changing diagnosis, Finkelstein recalled that she began experiencing pain in her right breast and felt “a little bit of a lump.”

“I really didn’t think anything of it,” she told In The Know. “I touched it once, maybe twice, and then I kind of forgot about it.”

A few months later in August, Finkelstein, who was entering her fourth year at McGill University at the time, says she began waking up with what she thought were nosebleed stains streaked across her sheets.

Only weeks later did she realize that the stains were actually the result of nipple discharge, one of the more common symptoms of breast cancer.

Finkelstein immediately sought medical attention and within two weeks of testing, including an MRI and CT scan, she was handed the diagnosis. She recalled:

“It all happened so fast. By the time I realized that my breast had discharge [coming] out of my nipple to the time I was diagnosed, it really didn’t take long.”

Finkelstein’s treatment plan began with a double mastectomy, a surgical procedure where both of a patient’s breasts are removed, followed by 16 rounds of chemotherapy.

She fought her cancer battle alongside her mother Merle, who had just received word that her own breast cancer, which she was first diagnosed within 2010, had returned.

“It was awful, really really awful,” recalled Finkelstein, who is now 4 years in remission.

“I finished my chemotherapy on the first day of summer, so I kind of felt that one door was closing and another door was opening.”

At first, Finkelstein says she was haunted by her decision to opt for a full double mastectomy instead of a simple lumpectomy, a surgery in which only the tumor and some surrounding tissue is removed while the majority of the breast is preserved, which some physicians had suggested. However, a post-op biopsy revealed the radical procedure was the right treatment option for her.

“I remember saying to myself, ‘Why did you do a double mastectomy? That is the stupidest decision you could have done,’” she recalled.

“I’ll never forget. I was crying, really bawling my eyes out. I was so sad that I made this drastic decision — and the next morning, I got a call that they found seven other tumors [in my removed breast tissue] and they all happen to be cancerous. It just goes to show you that sometimes you need to go with your gut feeling.”

If your current age is 20, your probability of developing invasive breast cancer in the next 10 years is just .06 percent, or 1 in 1,732, according to BreastCancer.org. This means that 1 in 1,732 women in this age group can expect to develop breast cancer.

By age 30, those 10-year odds increase to .44 percent, or 1 in 228. At 22, Finkelstein was certainly an outlier patient, which shocked even her physicians.

“I just had an innate feeling when I went to the doctor to find out the [biopsy] results,” she recalled.

“I remember it took him quite a bit of time to actually spit it out, and then he [finally] goes, ‘I just don’t believe it. You’re so young. I would never expect it.’“

Although the odds of women in their early 20s receiving a diagnosis like Finkelstein’s are very low, it’s never too early to learn the warning signs of breast cancer, especially considering one of the most important factors in successfully treating the disease is early detection.

When breast cancer is detected early and in the localized stage (i.e. there is no sign the cancer has spread outside of the breast), the 5-year relative survival rate is 99 percent, according to the National Breast Cancer Foundation.

That rate decreases the longer cancer goes without detection, especially if it metastasizes, or spreads to other areas of the body.

According to BreastCancer.org, the main breast cancer symptoms that people of all ages should look out for include:

swelling of all or part of the breast;

redness, scaliness or thickening of the nipple or breast skin;

nipple discharge other than breast milk and a lump in the underarm area.

If you experience any of these symptoms, contact your physician ASAP.

Thankfully, doctors caught Finkelstein’s cancer early when it was still classified as Stage 0, Grade 3, meaning it was growing fast but hadn’t spread outside of her breast yet. Had she held off seeking treatment any longer, her prognosis could have changed.

SEE ALSO: Stories Of These Breast Cancer Survivors And Their Support System Is So Inspiring| Photos & Video

“I think the reason why in January 2016 I didn’t make a big deal about [the lump] is because I didn’t know what to look for,” Finkelstein said.

“I was 21 at the time, and I never gave myself a self-breast examination — I didn’t even know what that was, I never heard that term before.”

“I was very insecure and very uncomfortable with my body that I would never just go and start touching and feeling,” she added.

“The word ‘cancer’ was not even in my vocabulary, it wasn’t something I’ve ever thought of or could imagine happening. And that’s why I think it took so long.”

To aid with early detection, Fineklstein suggests remembering the motto “feel it on the first,” which is part of a movement started by fellow Canadian breast cancer survivor Nalie Agustin, who was diagnosed at the age of 24.

“[The phrase] is to remind women that every first of the month, [you should] check your breasts,” Finkelstein explained.

Dr. Aashini Master, a board-certified oncologist and spokesperson for the Keep A Breast Foundation, told In The Know she recommends women undergo their first clinical breast exam (i.e a breast check performed by a physician) at the age of 20 and then every 1-3 years after. Dr. Master explained further:

“The breasts are still undergoing developmental changes during this decade and are prone to hormonal influences, which may present as lumps. However, in a very small percentage of women, we do diagnose breast cancer.”

Following your first clinical exam, in which a physician can make you aware of “any normal-feeling lumps you may have in your breast,” Dr. Master recommends performing monthly self-exams “a few days after your period.”

“The components of a self-exam would include looking at the breasts in the mirror for any signs of dimpling, rash [and] nipple inversion, if not naturally inverted,”

“The next steps are to manually examine the breast tissue with the opposite hand in the lying and standing positions, in either order. I typically use a circular motion starting from the upper outer quadrant of the breast and gradually moving in toward the nipple. And don’t forget to extend up into the armpit!”

Dr. Master also recommends using an app like Keep A Breast to remind you when it’s time to perform your monthly exam. The app also can provide guidance should you feel anything abnormal, such as a lump.

Although Johns Hopkins Medical Center reports that 40 percent of diagnosed breast cancers are detected by women who feel a lump, not all breast lumps will turn out to be cancerous, which is why it’s important to understand what you’re looking for during a self-exam.

“A classic malignant lump feels very hard, immovable and any size,” Dr. Master explained. “Sometimes, it is as small as a BB.”

“It is important to remember that some types of breast cancer do no present with a palpable mass, so skin inspection is equally important,”

ALSO SEE: Breast Cancer Awareness Month: What To Know About The Latest Developments In Breast Cancer Research, Prevention And Treatment

Dr. Master recommends using two weeks as a benchmark for seeking medical care, meaning if you feel a new lump that does not resolve itself within that time, you should have it formally evaluated.

“Most importantly, if you as a young woman feel something is wrong, you may need to advocate for yourself in order to get appropriate care,”

While some women may be at a higher risk of developing breast cancer due to family history or a hereditary cancer syndrome, such as specific inherited mutations in the BRCA1 and BRCA2 genes, Finkelstein wants to make it clear that the disease does not discriminate and that it’s never too early to start paying attention to your breast health.