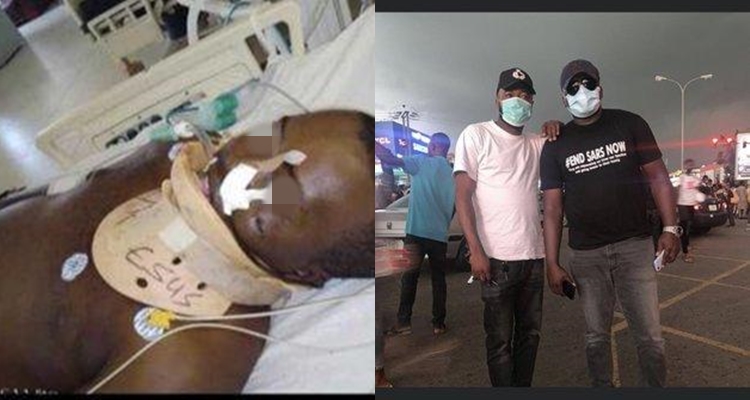 Lotanna Igwe Odunze, popularly known as Sugabelly, has blamed the death of EndSARS protester, Anthony Onome, on ignorance. She took to her Twitter handle to express her dismay that not only are Nigerians in danger from bad functioning hospitals among other things but that the average Nigerian has no idea what to do to help his fellow citizens in the event of an emergency.

True to her argument, Anthony Onome was stabbed in the neck by hoodlums on Saturday when he joined other young citizens to protest against police brutality. By Sunday afternoon, news of the death of Onome was announced but a shocking video emerged of Onome moments after he was stabbed and bleeding profusely from his neck. There were sympathisers around him as he wobbled to get to safety; no one saw the urgency of the situation; a careless inclination that Sugabelly argues caused Onome’s avoidable death.

Watch the mentioned video below:

This is Anthony Onome Unuode , retweet for the world to see how people are being killed in Nigeria just for asking for their rights
????#EndSARS#EndPoliceBrutalityinNigera#ENDBADGOVERNANCE pic.twitter.com/MaZHCYVhqu

Sugabelly explained that his death could have been avoided if other protesters present had basic first aid knowledge. She pointed out what the people present did wrong and how their inaction could have led to Onome’s death.

She then gave first aid tips on what should be done if a protester is stabbed.

How many people learned growing up that you should never pull out the knife if stabbed?

People in Nigeria are not only in danger from bad functioning hospitals or public facilities, we are also in danger from being surrounded by ignorant people. You owe it to yourself, and you owe it to our country to be well educated on what to do in various emergencies Do better.

Sound First Aid knowledge will not always save lives, but when majority of Nigerians know the correct reaction to life threatening emergencies, our collective lifespan as a country will increase & senseless, preventable or salvageable deaths will reduce You owe it to us to learn.

She then went on to share about a hockey player who lived to tell the story of a life-threatening injury after his coach responded by sticking his fingers in the player’s severed jugular, thereby stopping blood loss.

An incident happened on the day I was born that I have never forgotten my entire life. A hockey goalkeeper, Clint Malarchuk’s jugular vein was sliced open.

Within seconds his coach had jumped over the stands onto the ice, ran over to him, inserted his hand into Clint’s cut open neck, and pinched his jugular vein shut. His coach then walked with him off the ice, maintaining the pinch hold and got him to a doctor and medical personnel.

Clint Malarchuk lived to tell the tale, because of what his coach knew about stopping bleeding, and his lightning fast reaction.

While we blame the hospital for failing to treat Moradeun, you should also blame yourselves for ignorance. This is only right if we are being honest.