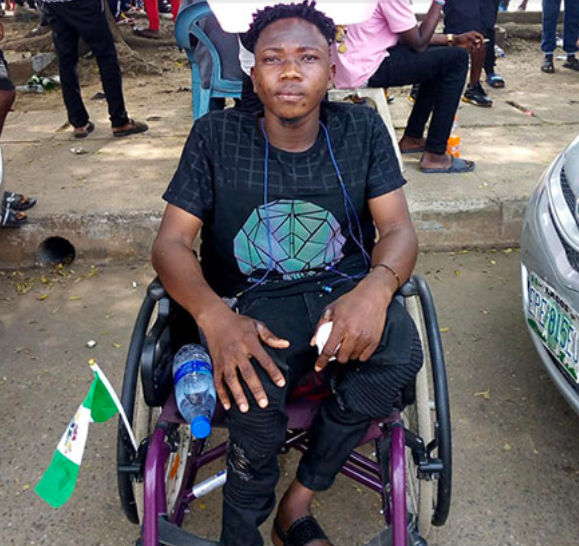 As #EndSARS protests continue across the states nationwide, some Lagos residents living with disability vow to continue despite the challenge and pain of moving around.

According to them, Police brutality and harassment are worse than the challenges of living with disability.

In spite of the Inspector-General of Police, Mohammed Adamu, announcing the dissolution of the Special Anti-Robbery Squad, SARS, protesters have continued their protests against the disbanded Police unit.

They are demanding holistic approach to the reformation of the entire Police Force.

One of the victims, Mr. Job Abah, 27, told PUNCH HealthWise during a visit to Gbagada Phase II along Oshodi-Apapa Expressway on Monday where the protesters had blocked the road, that he was a victim of SARS harassment this year despite his condition. 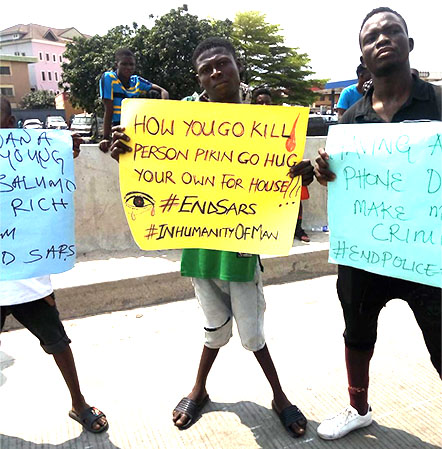 Narrating his frustration, Abah, who is into shoe making, said,

“I have to come out and join the protest because I am a Nigerian, though it is difficult for me to walk long distance. We are tired of the killing of innocent lives by the Police.

“Again, I have vowed to continue with protest because I am a victim of Police brutality.

“This year, early January, when I was sitting in front of our house in Gbagada, SARS officials on patrol saw me and arrested me, accusing me of being a criminal because I was wearing dreadlocks.

“They came from Anthony. So they said they will take me to their station and charge me to court if I failed to cooperate with them.”

The Benue State indigene who was not born with disability further said,

“When I pleaded with them that I wasn’t a criminal that I just loved wearing dreadlocks, they told me to bring N30,000 for them to close the case or they will charge me to court if I got to their station.

“That was how I paid them the money to avoid trouble. They harassed and extorted money from me without any offence and also not minding my condition.

“I will join the protest day and night, not minding the challenge I have moving around or standing. It was because of that particular incident that I stopped wearing dreadlocks.”

According to him, his two legs became paralysed at the age of 12. He further shared:

“I was in primary six when it happened. I was sick and my mother took me to the hospital and I was given an injection.

“After sometime, I found it difficult to walk. The sickness paralysed my legs. That is all I can say about how it all happened. But I thank God I can still manage to walk because before, I was crawling.”

Also, Mr. Oluwasefunmi Orebanjo, 28, could not be stopped by wheelchair in taking part in the protest as he revealed that his voice must count.

“It is not easy for me to move around on wheelchair without support. But because I have made up my mind to be part of this change despite all odds, I told my friends to bring me here.

Another protester living with disability, Mr. Lanre Okoya, 37, revealed that he decided to endure pain in order to protest against the injustice perpetrated by the Police. 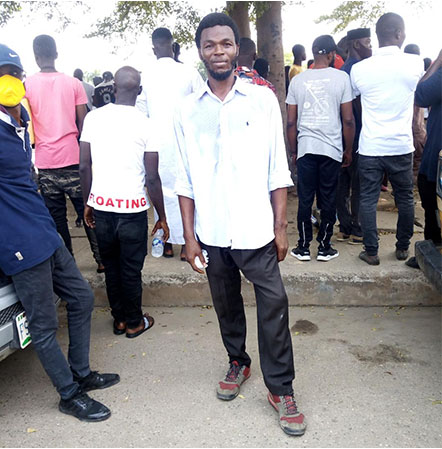 “The reason why I joined is because I have seen the Police harass people without any reason. This injustice has to stop.

“Though it is not easy for me to move around freely because of my leg, I will not back out of the protest until all our demands are met. May I tell you that Police brutality is worse than living with disability”,

The respondents also told reporters that they were not worried about COVID-19 infection, adding that their demands were more important to them.

Besides those living with disability, other protesters who spoke with our correspondent, also said COVID-19 infection would not deter them from the protest.

A resident of Gbagada Phase II who simply identified himself as Funsho, said the estate had made adequate provision for the protesters.

On the issue of ambulance, he said any protester requiring emergency care will be taken to Gbagada General Hospital.

“We don’t have our own ambulance yet. We just started on Friday. But anyone requiring emergency care will be taken to Gbagada General Hospital. The hospital is not far from here and they have an ambulance”,

When PUNCH correspondent visited the hospital, an official at the emergency centre said no protester had so far been brought to the hospital.