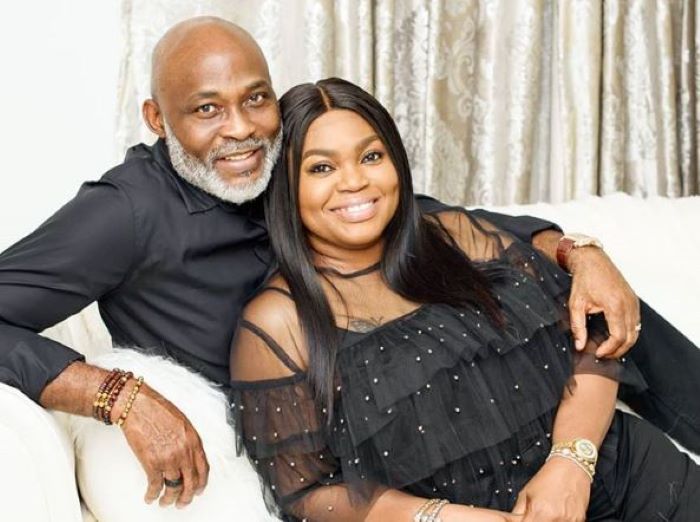 Veteran Actor, Richard Mofe Damijo popularly known as RMD and his wife have been married for good 20 years and counting. It’s no wonder they are the envy of most married couples.

The couple got married on the 29th December, 2000 and their marriage has been blessed with four beautiful children.

The lovebirds are known to step out together at some events but keep their marriage strictly away off social media, which is, according to the veteran actor and grandpa, one of the many reasons of their successful marriage.

RMD, in a recent chat with CITYPEOPLE also stated clearly that the success of his marriage is also due to the decision of Jumobi to stay off the limelight for him to enjoy the celebrity lifestyle, while she takes care of the home front and to him that is the biggest sacrifice any woman can ever make to keep her marriage and all this has worked for them.

On the secret of their successful marriage of 20 years and blending kids together, RMD said:

Honestly, all the credit goes to that beautiful woman Jumobi Adegbesan that copes and manages me. Each time, people ask how is your wife I tell them she is still managing me, it has not been easy, I owe her a debit of gratitude because she took a set back for me.

When we got married, she was already a television personality people love and she could have been anything she desire to be but she said to me, I am going to stop, get me a regular job, I don’t want to be celebrity and I said why, she said one person in the family is enough, you stay there and do your thing and let me take care of the home front, to me that is a lot.

If that is not love at the highest level of personal sacrifice then I don’t know what it is, and so you can’t have a partner like that and you won’t step up in things you do and I am far, far, far from being perfect but blessed with an almost perfect wife, that would do anything for me.

So my success as a father is just because I am blessed with an amazing wife, and what I am today is just keeping up to the level at which she operates.

What is next for RMD?

Lately, I just caught the documentary so, I am trying to do documentaries mostly about the heroes I admire, once we all get liberated I will go back to work I started before the lockdown and when it is completed you will hear about it.