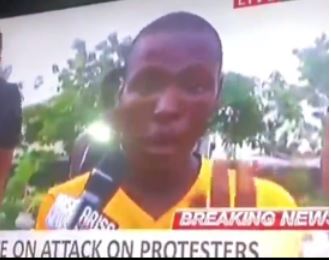 A Nigerian man who narrowly escaped being killed during the Lekki shooting has shared the chilling story of how he survived Tuesday night, October 20, attack at the tollgate.

The man who gave his name as Ayoola said he is a professional swimmer adding that when the armed men who he described as soldiers started shooting at the peaceful protesters, he jumped into the river and that the alleged soldier pursued him into the river and continued firing shots.

Ayoola further narrated that he would have been dead if he wasn’t a good swimmer.

Recall that men dressed in military gear opened fire on unarmed protesters at the Lekki toll gate around 7pm on Tuesday, leaving many dead, injured and hospitalised.

Watch as Ayoola tells his experience below: