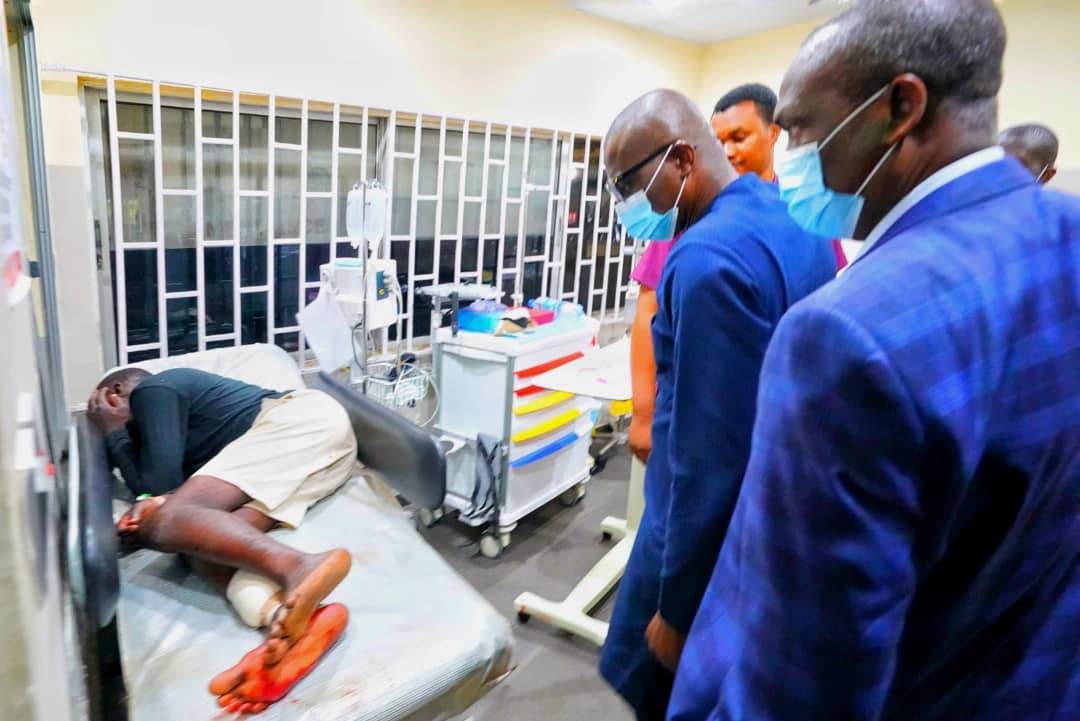 The Lagos state government has reacted to the shootings at the Lekki tollgate where #EndSARS protesters gathered on Tuesday evening, October 20.

The Governor, Babajide Sanwo-Olu, ordered an immediate investigation into the shootings which happened hours after he imposed a 24-hour curfew in the state.

Men dressed in military gear opened fire on unarmed protesters at the Lekki toll gate around 7pm on Tuesday, leaving many dead, injured and hospitalised.

The men in military gear opened fire on the unarmed protesters two hours before the curfew was billed to kick off. So many have been reported dead and many injured.

However, Sanwo-Olu blamed the shooting of peaceful protesters bythe security agents on “forces beyond his control.”

The governor, who said Tuesday evening was the toughest night of “our lives,” said the shooting leaves dark notes in the history of the state.

Mr Sanwo-Olu, who posted the statement on Twitter early this morning, shared pictures of himself visiting those injured in the shooting.

According to Mr Sanwo-Olu, 10 victims are currently being treated at the state-owned General Hospital, 11 at Reddington Hospital, and four at Vedic Lifecare Hospital. He also said two victims of the shooting were receiving intensive medical care while three victims had been released.

The governor did not give the figure of the fatalities from the shooting, but witnesses said there were about a dozen dead. Mr Sanwo-Olu promised to make a state broadcast later this morning.

Below is the governor’s statement.

”This is the toughest night of our lives as forces beyond our direct control have moved to make dark notes in our history, but we will face it and come out stronger.

I’ve just concluded visits to hospitals with victims of this unfortunate shooting incident at Lekki. It has taken me this long to make a statement because I have to prioritize the welfare of the victims of this very sad incident.

There are currently 10 patients at the Gen Hospital, 11 at Reddington and 4 at Vedic; with mild to moderate levels of injuries while 2 are receiving intensive medical care. 3 patients have been discharged & we will continue to monitor and ensure all patients get the best care.

As the Governor of our state, I recognize the buck stops at my table and I will work with the FG to get to the root of this unfortunate incident and stabilise all security operations to protect the lives of our residents.

I will give a state broadcast in the morning.” 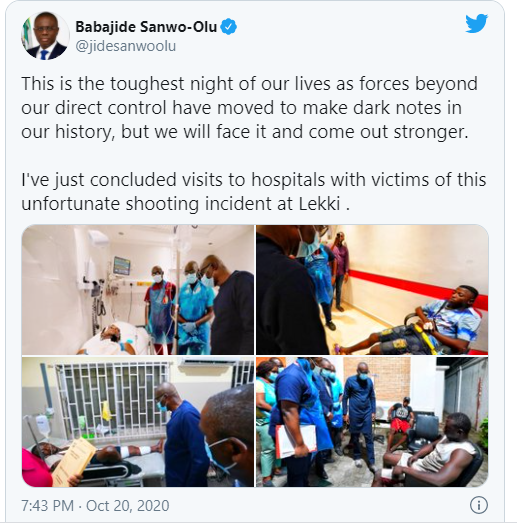 Forces beyond your direct control indeed!

The shootings have been condemned by all sane voices in Nigeria and abroad.

“Dialogue is the only logical option in the current situation and not violence. Dialogue may take a longer time to work and it may appear frustrating. Still, as a leading member in the comity of nations, violent silencing of protesting youths cannot be an option for Nigeria.”

More than 30 people have now been reported dead across the country since the protests were reignited penultimate week.