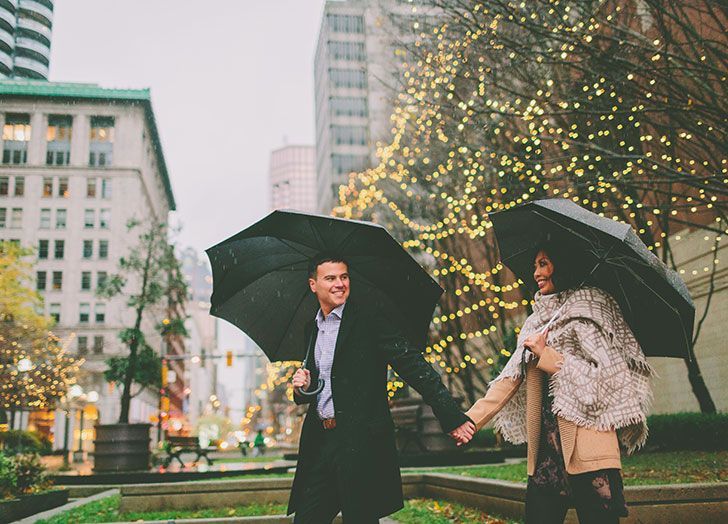 Back in the 1970s, Dr. John Gottman and his research associates asked couples to solve a conflict in their relationship in 15 minutes while they watched on. After studying the tapes and following up with couples nine years later, they were able to predict which couples would still be together and which would divorce with over 90 percent accuracy.

“When [couples in happy marriages] are talking about something important,” Dr. Gottman says, “they may be arguing, but they are also laughing and teasing and there are signs of affection because they have made emotional connections.”

This one’s a no-brainer to anyone who’s ever cohabitated, but there’s actually some data to back it up. According to a Pew Research poll, sharing household chores ranks third in importance on a list of nine issues associated with successful marriages (after faithfulness and good sex). A good stat to have on hand the next time your S.O. complains about unloading the dishwasher.

We get it—you’re in love and you want all your 843 “friends” to know it. But according to researchers from Haverford College, the more insecure someone is feeling in a relationship then the more likely they are to post to social media for some kind of validation.

Yikes. Hey, by all means post the adorable snap of you two on vacation, but if you (or your partner) are oversharing on the internet about your relationship, then maybe take a look at what’s really going on between you two.

4. AND PUT DOWN THE PHONE

You already know that phubbing (that’s snubbing someone with your phone) is bad for your relationship but how about fighting via text message?

One study from Brigham Young University found that couples who apologize or try to work out their differences via text message tended to report higher levels of unhappiness.

The fix? Talk through the hard stuff face-to-face, instead. (Totally acceptable to send a quick “I’m sorry” text to your S.O. for the small stuff though, like eating the last cookie.)

In the beginning of your relationship, you gushed every time your S.O. brought you your morning cup of coffee, but now you barely notice when it appears on your bedside table. Everyone likes to feel appreciated, but being in a long-term relationship can mean you start taking each other for granted.

A study published in the journal Personal Relationships found that gratitude is key to a healthy and successful marriage. In fact, researchers found that the simple act of saying “thank you” to your partner regularly can be powerful enough to protect a couple’s divorce proneness.

Well, here’s something crazy. Researchers from Dartmouth College and the University of Warwick in England estimated that increasing sexual activity from once a month to once a week is equivalent to the amount of happiness generated by getting paid an extra $50,000 per year. Wowza.

7. Be Your Partner’s Champion

A fascinating study published in The Journal of Personality and Social Psychology found that the way couples react to each other’s good news—either with excitement, pride or indifference— is vital to a long-lasting relationship. And the news doesn’t have to be about the big stuff, either (say, your S.O.’s promotion). Did your partner beat their swim lap record by three seconds? High five, all the way.

Studies show that couples who try new things together regularly are happier in relationships. That’s because new experiences activate the brain’s reward system, flooding it with feel-good chemicals like dopamine and norepinephrine.

So, instead of spending date night at your usual restaurant, why not try going to a concert or out dancing? Shake things up to keep things stable.