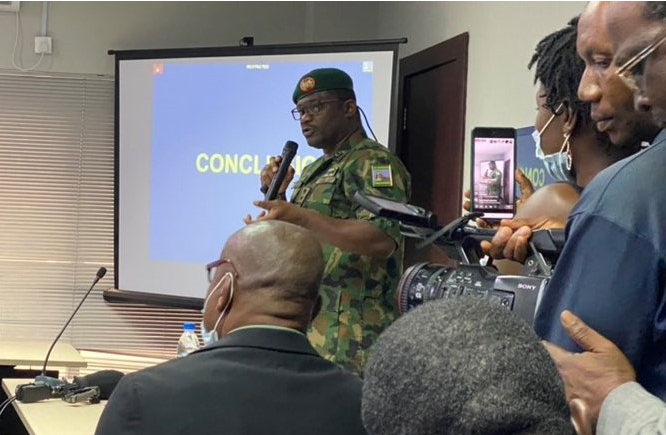 The Nigerian army has expressed its disappointment with Governor Babajide Sanwo-Olu’s insistence on not inviting them to intervene in the #EndSARS crisis in Lagos state.

Brigadier AI Taiwo who shared the Nigerian army’s account of the Lekki Toll Gate Shooting at the resumed sitting of the Lagos judicial panel on Saturday, November 14, stated that Governor Sanwo-Olu called on the military for support on October 20 after the #EndSARS crisis degenerated into “violence.”

“I spoke with the governor and said the army was unhappy that he said he did not ask the army to intervene.

But I’m sure, after we’ve watched everything, we saw he had more than reasonable grounds to ask the army to intervene.

“Perhaps, it was the way everything went that made him say so.”

Recall that Sanwo-Olu who reacted to the outrage that trailed the shootings had blamed it on “forces beyond our direct control”.

Also appearing on CNN, the Lagos state Governor who confirmed that the army was responsible for the incident, denied having a hand in it.

He said in the interview;

“From the footage we could see, because there were some cameras at that facility, it seems to me that they would be men in military uniform—it should be Nigerian Army or something.”

Furthermore in his testimony, Brigadier Taiwo told the panel that inviting the military was the best decision the Lagos State Governor, Babajide Sanwo-Olu, could have made as the #EndSARS protest plunged the state into anarchy.

Due to the urgency of the situation, it is no wonder the governor declared a 24-hour curfew which was supposed to start by 4pm.

Analysing that further, it shows that the situation was so dire and the governor wanted everyone off the streets.

After some observations, this timing was shifted to 2100hrs, that is 9pm.

However, these timings were not communicated to the Nigerian Army.

Be that as it may, the Nigerian Army deployed immediately to forestall further break down of law and order.”

According to Taiwo, there would have been a lot of fatalities if the 600m live ammunition normally used by the military were used to disperse the #EndSARS protesters.

I have been in the army since 1986 and you cannot be under fire and be singing.

The entry hole for the 600m is thin while the exit is wide, if it hits you in the chest or the bowels, the intestines come down.

I am an expert in ammunition having spent so long in the army.

Blank ammunition is slower and can do no damage to the flesh and you have nothing to fear except you take a rifle, put it against your eye and fire.

Even if you put it against your skin and fire you will only have burn marks.”

Brig. Gen. Ahmed also said the change in timing of the curfew imposed by the Lagos State Government on October 20, 2020, was not communicated to the Nigerian Army.

The Lagos governor has been under fire since the incident at the Lekki toll gate which has been condemned by local and international civil rights organisations.