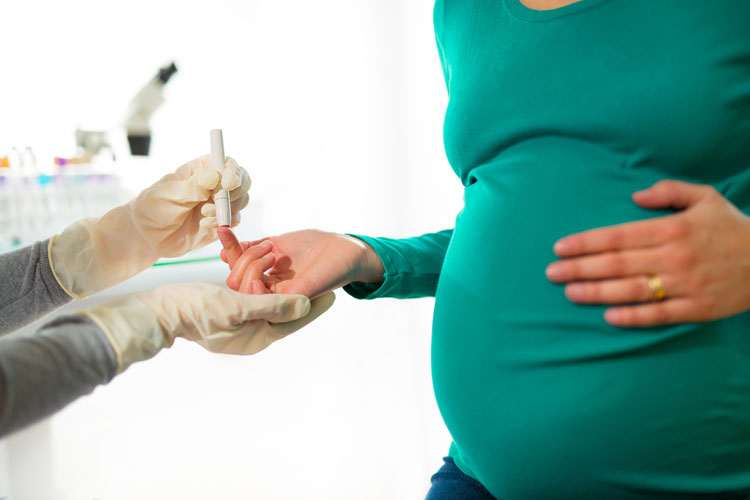 A new study has shown pregnant women with obesity could reduce the health risks for their infants through improved diet and more physical activity. Research published on November 9, 2020, in the journal PLosMed investigates the impact of high glucose in mothers with gestational diabetes mellitus (GDM) and changes to infants’ DNA.

GDM is becoming more frequent around the world alongside a rise in obesity and can increase the risk of complications during pregnancy and childbirth as well as increasing the risk of metabolic disease in the child in later life.

High levels of glucose in mothers with GDM have been suggested to trigger epigenetic changes in the developing fetus (chemical modifications to the genetic blueprint of the fetus that function of genes activity) resulting in adverse health outcomes for the child.

Researchers from the University of Southampton and King’s College London studied data from over 550 pregnant women with obesity and their children, from the UK Pregnancies Better Eating and Activity Trial (UPBEAT).

The trial aims to improve the diet and physical activity of obese pregnant women across the UK. Compared to women in a control group, who made no changes to their lifestyle during pregnancy, women who were supported in changing their diet to lower glycemic index foods that are broken down less quickly by the body, a reduced-fat intake, and increasing their physical activity put on less weight and were metabolically healthier.

In this new study, researchers compared the level and pattern of DNA methylation, a major epigenetic mechanism which controls gene activity, in the newborn infants from mothers who developed GDM with those that did not. They then looked at whether a dietary and physical activity intervention during pregnancy altered these modifications in infants born to mothers who developed GDM.

The results showed that GDM and high glucose levels in mothers were linked to changes in the level and pattern of functional modification to the infants DNA. Moreover, they found that the dietary and exercise intervention significantly reduced these methylation changes in the infant associated with GDM in the mothers.

Karen Lillycrop, Professor of Epigenetics at the University of Southampton said,

“These findings suggest that improvements to diet and physical activity can have an impact on the development of their children.

“These are very encouraging finding and further studies are now needed to establish whether reducing these epigenetic changes through a healthier lifestyle during pregnancy are accompanied by improved health outcomes for the children in later life.”

“we have known for some time that children of mothers who had gestational diabetes are a greater risk of obesity and poor control of glucose; this new research implies that epigenetic pathways could be involved.”

“Obesity during pregnancy can have lifelong negative impacts on mother and baby — so one of the best things mums can do is to improve their health, including their weight, before embarking on a pregnancy.

However, this study shows that mums who are overweight and their babies can still benefit from adopting a healthy diet while pregnant.

All mums-to-be need access to healthy eating advice, and those who are overweight should be given non-judgemental practical support and encouragement to eat healthily during pregnancy.”