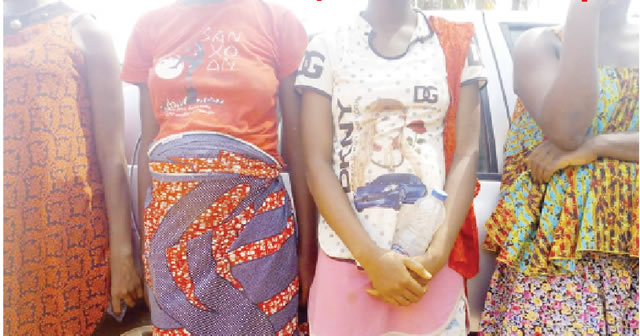 Paediatrician, Dr. Ademolu Abiola Explains Why Applying Breast Milk To A Baby’s Eyes & Other Practices As Cure For Jaundice Is Dangerous

When you are done reading the story of these teenage girls in focus, the one question that will linger is ‘what could be more cruel?

There were tears in the eyes of Favour Christopher, a 17-year-old mother, who betrayed her emotions as she narrated her experience in a baby factory – usually an illegal facility housing pregnant women, sometimes against their will, and offering their babies for sale.

“I slept off after I gave birth to my baby and when I woke up, I could not find my child beside me. When I asked about the whereabouts of my newborn baby, a sum of N100,000 was sent to me,”

she said, with her voice cracking.

Favour and five others shared a similar fate at the baby factories where they were found in Abaren village, Ofada, and on Lagos Street, Mowe in the Obafemi-Owode Local Government Area of the state, both in Ogun State.

While Favour was not lucky as she had barely given birth and had the chance to savour the joy of motherhood before her baby was sold, the others had not given birth before the facilities were raided by the police.

A woman identified as Mrs Florence Ogbonna, and suspected to be the brains behind the syndicate, is reportedly at large, but her daughter, a physically challenged man, said to also be involved and her driver were arrested.

The pregnant teenagers and one 20-year-old woman were reportedly transported separately to Ogun State from Imo, Abia, Akwa Ibom, Bayelsa, Rivers and Ebonyi states under the disguise of securing jobs for them.

They were identified as Favour Christopher, 17, from Rivers; Julianah Wilson, 17, from Akwa Ibom; Okechukwu Ifunaya, 17, from Ebonyi, Igwe Blessing, 15, from Imo; Orji Gift, 19, from Imo and the eldest, Gift Etim, 20, from Rivers State.

Sharing her experience, Favour said she was impregnated by her boyfriend, who failed to take responsibility for it. In the process of picking up the pieces, she met a woman identified as Madam Joy, who offered to help her get a job.

Madam Joy reportedly took her to a park and handed her over to a driver, Kenneth Richman, whose job was to take such teenage girls to either of the two baby factories, according to the police.

But soon after arriving at one of the baby factories, she was due for delivery. So she was blindfolded and taken to a place, where her baby was delivered. Favour shared,

“My baby girl was delivered last Tuesday. I did not see the baby, I was only told. I don’t know the place where I gave birth to the baby. I was taken there at night and I was blindfolded. I left the place the same day my baby was delivered.

“When I asked for my baby, they said I should not worry about it. They said the woman that brought me there was waiting for me at a junction but when I got to the junction, I did not see her, I saw someone else. The person took me to the place where the woman was staying.

“They did not tell me that they had sold my baby; they only told me to send my account details. But since I didn’t have any bank account, I begged a lady there (one of the pregnant teenagers there) to let me use her bank account and the money was sent to her account. She showed me proof when the N100,000 was paid into her account.”

When asked about what she intended to do next, Favour, whose eyes had become puffy from crying, said,

“I’m planning to go back to Port Harcourt, Rivers State. I want to go back to school. I dropped out when I was in Junior Secondary School 3.

“I don’t even know the name of the person that sent the money to me. I don’t know where my baby is or the woman that took her. I feel bad about this. I called the boy that impregnated me several times before I came to Ogun State but he did not answer his phone.”

Like Favour, Julianah was impregnated by her boyfriend in her village in Akwa Ibom. Julianah was taken to the baby factory by her uncle, whom according to her, told her she would be living with his friend in Ogun State. She narrated:

“He told me that I would return to Akwa Ibom in December. And since I got here, I have not seen him and he has not spoken to me.

“I was not aware that they were selling babies here. When I got here, I did not see any pregnant girl. I only saw a woman with her children when I came in November.”

She, however, said when she learnt about what happened to Favour, she became agitated and wanted to run away but did not have any money to do that. She said:

“When Favour came, she said she did not see her baby. When I heard that they took her baby, I wanted to run away but I did not have any money on me. Soon after, the police arrested us.”

Ifunaya said she got to the baby factory in the process of searching for a means to take care of her unborn child.

Ifunaya said expectant mothers at the baby factory were not allowed to move freely.

“I was impregnated by my boyfriend in my village in Ebonyi. He agreed to take responsibility for the baby but he was not working and didn’t have any means to take care of me and my unborn child. So, I decided to look for money on my own,”

The story of 15-year-old Blessing is similar to the ones told by others as her boyfriend who impregnated her also denied responsibility. She was hawking boiled eggs at motor parks in Imo State when she met a woman who facilitated her trip to the baby factory in Ogun. She said,

“I got pregnant in April 2020, and I came to Ogun State in August 2020. When I got to the home (baby factory) the woman (the operator) told me she would send me to school and take care of my baby.”

After Orji lost both her parents, living became very tough. So, she asked the leader of the syndicate, who is her aunt, for help. She ended up at a baby factory. But Orji was not pregnant before joining others at the home. It was after she got to Ogun State that she was impregnated by her boyfriend in Mowe. Orji said,

“The woman is an aunt. I call her mummy because she takes care of me. My dad and mum have died. When my dad died, my mum was taking care of me and when my mum died, the woman started taking care of me. After my mum’s burial, I asked if I could follow her to Lagos and she said okay. That was how we came to Ogun State.

“I dropped out in primary six. When my aunt asked me what vocation I was interested in, I said hairdressing. So, I became an apprentice hairdresser at Mowe. The person that impregnated me did not deny it. He lives in Mowe and promised to come back. I’m six months pregnant now.”

For 20-year-old Etim, who is also pregnant, his husband took her to the baby factory with their two children and promised to come back for them but he never did. Etim said,

“In 2015, I met the father of my babies at a fast-food restaurant in Port Harcourt where I was working at the time. I got pregnant and had my first child on May 11, 2015. Then there was a time he wanted to go for his uncle’s burial and asked me if I wanted to go with him.

”I said no because I was not feeling well at the time. I told him that he should go alone and he left. He took me to the home (baby factory) and said he would return to pick me up. I’m pregnant but at that time, I didn’t know why he brought me to the home.

“My husband did not give me money when he was leaving us. Then the police came and arrested us. My husband is a mechanic in Akwa Ibom.”

The Police Public Relations Officer in the state, DSP Abimbola Oyeyemi, while reacting to the development, described it as unfortunate.

He said the police raided the homes following tip-offs from residents of the neighbourhoods where the baby factories were being operated.

“It’s quite unfortunate that barely 24 hours after we uncovered a baby factory, we discovered another one in the same area. From our investigation, we discovered that they are working together.

Some girls were rescued. One of them is pregnant, while another one just had a baby. But as soon as she had the baby, it was taken away from her. They sold the baby and gave her N100,000. One of them is heavily pregnant.”