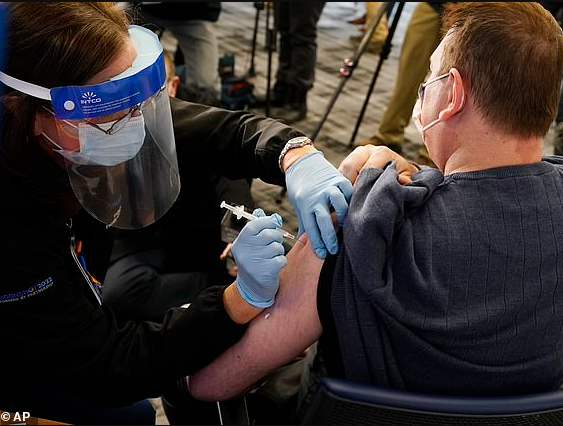 An Alaska healthcare worker suffered a serious allergic reaction within 10 minutes of getting Pfizer’s coronavirus vaccine on Tuesday, Dec 15. At a news conference on Wednesday, Dec 16, officials said the woman, who remains unarmed, started flushing and experiencing other signs of an allergic reaction after getting the vaccine at Bartlett Regional Hospital in Juneau.

She was hospitalized and remains stable in the ICU with expectations to be discharged later today. The woman has no history of allergies, according to a statement from the Alaska Department of Health and Social Services.

READ ALSO: FG Reveals How It Plans To Expend 20m Doses Of COVID-19 Vaccine Due To Arrive Next Year

Dr Jay Butler, the Centers for Disease Control and Prevention’s (CDC) deputy director for infectious diseases, said this is the only allergic reaction reported in the country thus far.

The allergic reaction is believed to be similar to the anaphylactic-like reactions suffered by two healthcare workers in Great Britain, both of whom have since recovered, after they were given the Pfizer-BioNTech SE vaccine last week.

With hundreds of thousands of Americans expected to be vaccinated in the U.S. over the next few weeks, health officials will be on high alert to see if any other recipients experience severe reactions.

In spite of her reaction, the woman is said to be disappointed that she is unable to receive the second dose of Pfizer’s vaccine.

“She kept a very positive attitude,”

“She was excited that she got the first dose and was disappointed that she will not be getting the second dose. And she encouraged all of us to press on.”

Dr Anne Zink, Alaska’s chief medical officer, said the state is not making any changes to its plan to administer the vaccine.

“There were over 40,000 people in the trials and we did not see any reactions like this,”

According to Zink, one of the providers who treated the woman said of her reaction:

“Lightning is going to strike somewhere.”

Pfizer has said anaphylactic reactions to vaccines are rare and are estimated to occur in around one per one million doses.

“We don’t yet have all the details of the report from Alaska about a potential serious allergic reactions but are actively working with local health authorities to assess,”

“We will closely monitor all reports suggestive of serious allergic reactions following vaccination and update labelling language if needed.

“The prescribing information has a clear warning/precaution that appropriate medical treatment and supervision should always be readily available in case of a rare anaphylactic event following the administration of the vaccine.”