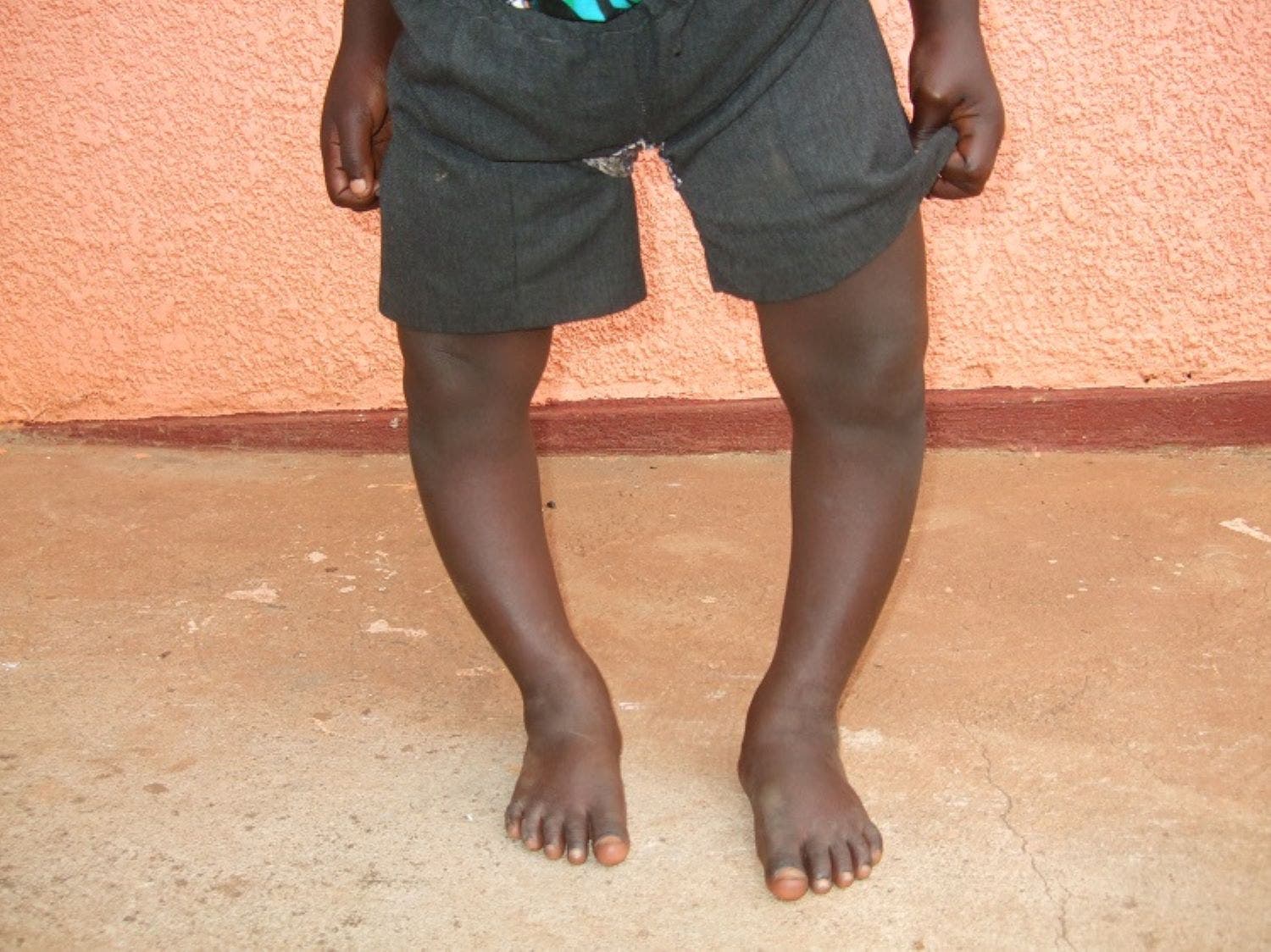 PUNCH correspondent, Angela Onwuzoo has reported cases of children who developed bow legs and knock-knees at the time they ought to have taken their first steps. That a baby is born without deformities is no reason to believe that the odds are over.

Mrs. Eucharia Agbaje is happy with the growth and development of her six children except one, Michelle, who is struggling to walk because of her bow legs.

The Delta State indigene said Michelle, a twin, was born in 2015 without any deformity, but she cannot explain why the girl later developed bow legs after the age of two.

Different medications have been administered for the legs to straighten, all to no avail.

The business woman said her daughter’s bow legs have become a source of concern to the family as the bowing of the legs is becoming worse as grows older, with the girl complaining of pain at all times.

“Michelle and her twin sister, Mirabel, were born five years ago without any deformity or health issues. But after the age of two, I started noticing a change in the way they walk, unlike their older siblings.

“Mirabel developed knock-knees, while Michelle’s legs began to curve outward. But after giving Mirabel cod liver oil for some months, the legs got straightened. I did the same for Michelle, but instead of the legs to straighten, they kept on curving outward.

“When she was three, I took her to a private hospital where the doctor examined her and told me that her bones were okay and that her legs would straighten in no distant time.

“But she is now over five years old and the legs are still the same. I am not happy seeing her walk with difficulty and in pain. She complains about pain each time she walks a long distance. I don’t know how long this will continue.”

The food vendor, who is in her 40s, said that little Michelle was also not keeping quiet over her condition as she always prays to God to heal her. She narrated:

“Every morning, she prays that her legs will be like that of her siblings. She is beginning to feel bad about the legs. Sometimes, she stays indoors while her twin sister and other siblings go out to play. Her condition is really stealing my joy.”

Experts say bow legs are a condition in which the legs curve outward at an extreme angle at the knees while the child’s feet are together.

Another mother who is also worried is Mrs. Joy Idoga from Benue State who told said that her daughter’s bow legs daily constrain her movement.

Sharing a similar experience with Agbaje, the mother-of-five recalled that her daughter, Deborah, did not walk early like her other children. She narrated:

“When she was a year and six months old, she was finding it difficult to walk. We became worried but decided to observe her for a while. But when she started walking, the legs continued to curve outward.

“She is over four years now, yet, there is no improvement. I wanted to take her to the hospital but her father refused. Though he is not a medical doctor, he keeps assuring me that the legs will straighten on their own. I don’t even know the cause.

“Out of my five children, she is the only one that has this challenge. Walking long distances is a problem for her. I am not happy about the whole thing. I’m worried because she is a girl.”

Also Mrs. Gertrude Abeh and other mothers who spoke with the news outlet said they were uncomfortable seeing their children walk in pain without knowing the cause.
Some causes of bow legs pathologic

The American Academy of Orthopaedic Surgeon says if a child’s leg is still bowing at the age of two, the likelihood of the child having infantile Blount’s disease or Rckets is greater at this age.

A Consultant Orthopaedic Surgeon, Dr. Ahmed Bola, in an interview, told PUNCH that there are different causes of the legs getting bowed, saying the condition is also called angler deformities of the lower limb.

Dr. Bola, who is the Chief Medical Director, General Hospital, Ilorin, Kwara State, said most of the causes of the bowing of the legs are physiological, adding that the majority of cases might be corrected on their own if they are not excessively bowed.

The orthopaedic surgeon, however, said some causes of bowing of the legs are pathological. He explained, “In pathology, there are different causes for either bow legs or knock-knees.

“That is, there are underlying diseases or problems that cause the conditions. The most common one in our environment is Rickets, the lack of Vitamin D.

“A large number of legs are corrected through surgery if the bow leg is as a result of rickets. The patient has to take drugs and when the bone is now strong enough and the bowing has not got corrected, the patient will go for operation to correct it. Also, there is a large number of patients whose bowing of the legs are caused by Blount’s disease. This is also pathological.

“With this one, there is excessive bowing, the legs can really get bad and will require operation to correct.”

But Mrs. Victory Nwankwo has a different story as she shared how her 13-year-old daughter overcame the challenge of bow legs through surgery. She narrated,

“She developed a bow leg after she started walking when she was about 18 months old. After the age of five when it was not getting better, we took her to the National Orthopaedic Hospital, Igbobi, Lagos.

“The doctor told us that something was wrong with the legs and would require surgery to correct. So, she was booked for an operation. But the legs later curved which were later corrected by the second operation when she became 12 at a private hospital in Enugu. The surgery cost N250,000 for each leg.

“Since then, she has been able do what she was not able to do before. She can walk long distances, play with her siblings, and help me with house chores. She is so happy to walk freely like others .”

“If patients do not seek care at the right time and the deformity continues until when they have grown, they may end up with osteoarthritis. Again, the alignment of the legs will be distorted.

“A large number of people have pain in their knees now, some of them as a result of untreated bow legs or knock-knees in their childhood.”

The surgeon urged parents of children with bow legs to seek help early before the child gets to the age of five.

A Consultant Paediatrician Paediatric Endocrinologist at the Lagos University Teaching Hospital, Dr. Elizabeth Oyenusi, says physicians are seeing more children with Rickets because they are not getting enough Vitamin D from the sun.

Oyenusi, who is also a Paediatric Endocrinologist, explained,

“From the house, they enter air-conditioned cars; when they get to their school, their play ground is covered. In the church, the child is inside and so, such children don’t get enough sun.

“Calcium comes from milk and things like dry fish. So, if the children are not taking enough in diet and they are not getting enough Vitamin D from the sun, they may develop rickets.

“Part of what rickets manifests is bow leg. The legs are bowing because the child does not have enough calcium.”

“When children have rickets, sometimes they have recurring pneumonia, chest infection, cold sores in the mouth and other deficiencies. Consequently, they may not be growing well.”

This, Asouzu says, is crucial for the future bone health of childhood and adolescence.

“It is also crucial for the long-term bone health of the mother and child and for the possibility of reducing the risk of long-term chronic diseases,”