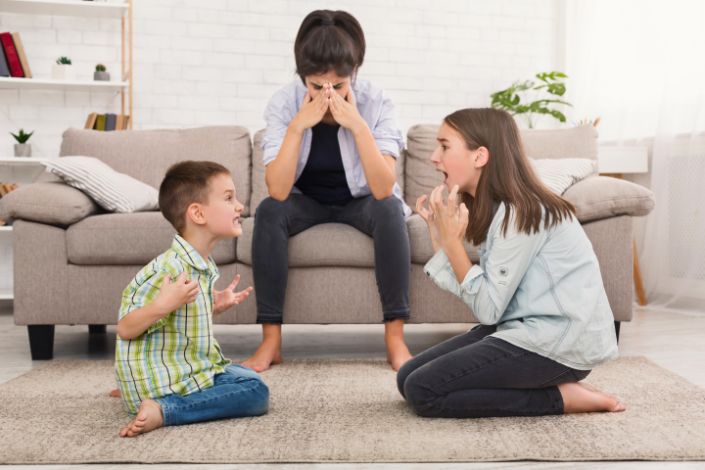 Sibling rivalry in particular can be a challenge to deal with in normal times, but with many families spending more time together than ever because of the  pandemic and remote schooling, that can create even more tension in some sibling relationships.

Parent with multiple kids knows that sibling relationships can be complicated, at times vacillating between being close friends and competitors.

“The first step is realizing that kids do often see siblings as competitors. It’s tough to have a sibling because at the end of day a sibling is, in some ways, competing for what can feel like the scarce resource of a parent’s attention or love.”

As with any relationship, from siblings to coworkers to partnerships, Kennedy says,

“we’re less likely to look around and see people as competitors when we feel secure in who we are and in our role there.”

Below are 7 ways parents can help diffuse sibling rivalry:

1. Designate one-on-one time with each child

One thing that parents can do to diffuse sibling jealousy and competitiveness is “to see each child for who he is,” says Kennedy. “Help each child feel valued in her uniqueness.”

And the best way to do that? “Have each parent spend quality one-on-one time with each sibling,” Janine Domingues, a clinical psychologist at the Child Mind Institute, tells Yahoo Life.

Designate “some space — it’s your brother’s day today and tomorrow’s going to be your day,” suggests Domingues. “That can foster [a] healthy relationship with parents and siblings.”

Kennedy agrees that having alone time with a parent is important.

“The more filled up a child feels by a parent, the more connected they feel… to the parents [and] actually the more likely they’ll see siblings as playmates and not competitors.”

2. Don’t compare siblings to each other

It’s all too easy for some parents to try to motivate one child by comparing him or her to a sibling. But Kennedy suggests parents should look at how much they’re “inadvertently reinforcing competition and comparison by pitting [siblings] against each other.”  She says:

“Sometimes it feels like the easier way to get a child to do something is name what a sibling is doing, but we are then locking them into gazing at each other as competitors again, rather than as playmates. I’m a big believer in orienting a child’s gaze back in.”

Kennedy gives an example of a parent taking one child out for ice cream during one-on-one time together and how the second child might feel it’s unfair that they didn’t get any ice cream.

Rather than simply responding with “I’ll get you ice cream, too,” Kennedy recommends saying: “‘I see you’re thinking about our day together. Did you want to get ice cream on our day together?’”

The child, after having a moment to think about what he or she wants rather than reacting out of sibling jealousy, may realize they actually want to do something different, such as ride bikes or have donuts.

Kennedy’s way of reframing the situation helps take the focus away from the sibling and gets the child to look inward and think about what they really want — which may still be ice cream!

3. Be honest about how hard it can be

Kennedy says it’s important to be honest with kids and “name what’s true,” while being empathetic. “Sometimes the best things to help kids get along is just naming how hard it is to get along,” says Kennedy.

She suggests saying something like, “‘Ugh, it’s so hard to have a sister. It’s hard to be living through COVID-19 and not be able to see friends so we’re together all of the time. No wonder you’re fighting a little more. I get that.’”

4. Slow down, rather than solve, conflicts

To help resolve the inevitable conflicts that come up between siblings, Kennedy says one of the best things parents can do is to view their role as helping to slow down conflict — not solve it.

“We all are pretty good at finding coping skills when we can slow down, meaning regulate our own emotions,” says Kennedy.

“When we see our role as helping our kids regulate the intensity of the emotion rather than come up with a solution… we leave space for kids to negotiate.”

For example, let’s say your young kids are arguing about who gets to use the red crayon (or the TV remote or any object there’s only one of).

Instead of the parent saying, “You go first and you go second,” Kennedy suggests de-escalating the situation and getting them to try to solve it themselves by saying something like: “‘Wow, two kids, one crayon. Oh my goodness, that is so hard. What can we do?’”

Domingues says parents can also talk to each child about what they individually can work on to become better problem-solvers.

“It might be for one sibling to wait 10 seconds before coming to me,” Domingues says.

“It might be what you’re working on is being flexible, seeing if there is something else you can do that’s not exactly what you’re wanting to do. It’s making problem-solving individual to them.”

Reality Star Mum, BamBam Speaks To Parents On Why They Must Invest In Their Children

That said, Kennedy emphasizes that parents should step in if a child grabs the object away from the other sibling or hits them.

She suggests saying, “‘I will not let you grab from your sister. I will not let you hit. I’m holding the red crayon until we figure this out.’” Kennedy adds: “We always have to preserve safety. But my goal isn’t to solve, it’s to help regulate.”

SEE ALSO: Tips to Help Your Kids Get Along

5. Encourage siblings to get some space

Sometimes the best way to prevent or diffuse sibling rivalry is for kids to spend some time apart. “It’s not just about connecting in a healthy way… but also knowing that giving space is healthy, too,” says Domingues.

She suggests that parents talk with their kids about how there are times when everyone can come together as a family and do something fun together, but that it’s also okay and healthy if a sibling wants some alone time.

“Talking about it is helpful so siblings don’t feel rejected,” says Domingues.

“Talk about healthy alone time and what you can do by yourself and having that space,” as well as “trying to have some designated times that the family or siblings come together to do a project or a game that they enjoy.”

6. Get the whole family involved

If tensions have been running high, Kennedy says that team meetings can be “really helpful” for families. She suggests having everyone get together and brainstorm about how to make things better, saying something like, “‘It’s been hard to get along.

It’s been hard to have time that feels peaceful, and I have some ideas about what might help, but I’m sure you do, too. You’re both kids with great ideas. I know we all want to have a household where we all get along a little better, so let’s come together.””

Kennedy recommends explaining that “no one is in trouble,” and suggests saying that, in fact, “‘everyone is coming to the table because we’re all really important members of this family.’”

Kennedy says that’s a way of framing the issue as a “family dynamic we can all work on rather than pointing the blame.”

To reinforce behavioral changes, try focusing less on reprimanding kids when they misbehave and more on the “positive opposite,” suggests Domingues.

In other words, “How can we catch them doing what we want them to do and praising them?” she says. It’s about focusing on “positive reinforcement and positive praise for each sibling,” says Domingues, adding: “Everybody has different strengths, and everybody is doing the best they can be doing right now.”