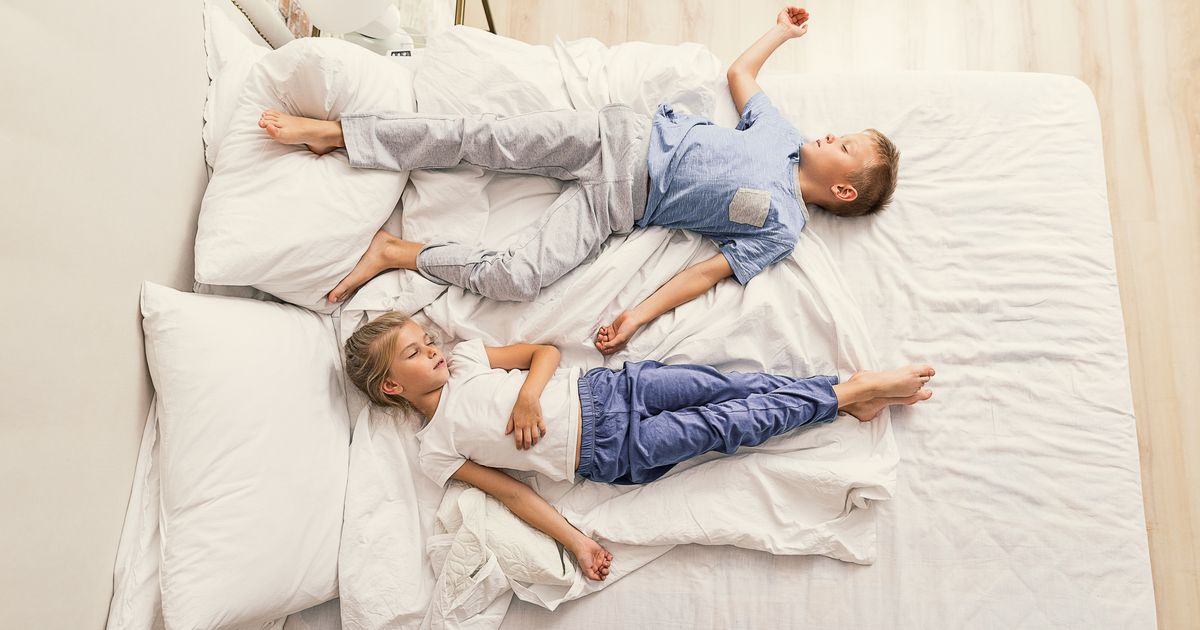 “There isn’t really any specific age when opposite- sex children should stop sleeping on the same bed. Parents ought to monitor their children and know where they are developed and make a decision from there.

“It will get to a stage when the children become more aware of their bodies and may feel uncomfortable changing in front of their opposite-gender siblings. Sometimes, parents may not be able to afford the luxury of different rooms but their bed can be separated.

“By the time children reach puberty, it will be difficult for them to feel comfortable sharing a room, and the need for privacy and space should be respected as much as possible.”

A teacher, Mr Akin Olowofela, told PUNCH that sometimes parents need to watch the attitudes of their children. He said,

“I don’t think it is an issue of age, once you notice that the children want their privacy, you should separate them from staying in the same room. Other things can stop when one or both siblings don’t want to do them anymore.

My kids started requesting privacy at eight or nine years. It even goes as far as hugging and kissing. Once you notice that your children are no longer comfortable with such, you should respect them.”

On his part, Mr Nathaniel Ekpeyong, said he believed that from age seven to 10, opposite-sex siblings should be allowed to sleep on separate bed and closely monitored. He said,

“Starting from seven to 10, children of opposite sex should be separated from sleeping on the same bed and they should be under close watch.

Apart from that, one must be careful of the movies or TV programmes they watch. One must guide them through sex education too. It is important, so that one does not put fire on one’s bosom.”

For another parent who is a mother of three and a bank worker, Mrs. Funmilola Amoo, there should be no one size-fit-all on when siblings should stop sleeping on the same bed.

Amoo said once puberty sets in, parents should look for a way to separate their children of opposite sex. She said,

“I don’t think there is a hard and fast rule about it. You must keep your eyes open. About separating bed space for opposite-sex siblings, I’d say it should come once puberty kicks in, or if any of the kids desires privacy while dressing.

“My oldest children are eight (girl) and five (boy) and I still have to remind them to allow each other privacy during bathing  because they love to tell each other jokes and play in the bathroom while bathing.

“My children all slept on the same bed a few weeks back when they were ill. In the past, they shared a bed during travels. I do not think there is an age limit for sleeping on the same bed, unless one of the children feels uncomfortable with the arrangement.’’

A trader and mother of four, Sylvia Njomo, said that irrespective of the parents’ financial status, opposite-sex siblings should not sleep on the same bed even if they had to share the same room because of finances. She said,

“Opposite-sex siblings can share a room because of financial burden but a curtain or a divider can be used to create privacy for sleeping and changing.”

A teacher and mother of two, Mrs Sola Agboola, said nowadays children were exposed to sleeping on same bed more than in the past, urging parents to be more aware of happenings with their children.

“Children at school seem to become aware of modesty from ages four to five.  I’d say bathing or changing in front of one another would probably stop when they want including sleeping on same bed.

I’d have thought this goes away with age; it’s not something anyone needs to impose. They’ll eventually become self-conscious enough that they’ll stop it on their own.”

For Nifemi Thomas, her experience showed that parents shouldn’t bother about the right time to separate them as the children themselves would stop at the right time. She said,

“There is no need to search for solution. Let them be kids and enjoy themselves within decent limits. I did share my bed with my brother till I was 16. Nothing bad ever happened. We just enjoyed our childhood, played together and grew up doing many things together.”

Another youth, Kemi Olohunwa, said there was nothing wrong in allowing kids children enjoy childhood. She said,

“I think I was in secondary school when my brother and I stopped bathing together. My brother and I were always close. I think we were in primary five or six when we stopped coming into each other’s rooms.

If we had a bad dream or couldn’t sleep, we would end up falling asleep on the same bed. My brother and I still play and wrestle and we are in our 20s. I still hug and kiss my brother on the cheek.”

Commenting on the issue, a developmental psychologist, Mrs Agiobu-Kemmer Ibinabo, said one cannot specifically state a particular age to separate opposite-sex siblings as many things ought to be considered. She said,

“It is important to take this into account because it is easier said than done, when you think of it. Ideally, they should be on separate beds no matter the sex. A child should be given a separate cot from birth, then the child gets a separate bed as he or she grows older. In fact, a child has his or her own special space from the womb except in the case of twins.

SEE ALSO: Sibling Rivalry: Are Your Kids Fighting More? See 7 Expert Tips To Help Them Get Along

The psychologist however lamented that such was not the situation due to poverty in the country. She added,

“This is not the reality because most Nigerians don’t even have beds at home and some that do, it is reserved for the parents while the children sleep on the floor. It would be wrong to preach the foregoing as such parents cannot help the circumstances they found themselves.

If they could afford more than one room, they will give their children the best of lives. But in a situation where they all sleep on mats, how does one justify the fact that children should sleep on different beds.  These are the reality that has confronted the people.’’

Advising parents, an expert in psychology, Dr. Uzondu Chinemere, said as children enter puberty, having a space where they can feel comfortable with their bodies is important. He said,

“Some children may be unwilling to have their own room. But by emphasising the benefits of having their own space, these children would be encouraged to accept the change in sleeping arrangements.

“Try as much as possible to emphasise the need for privacy and ensure each child has whatever they need for study, play, and entertainment. Make each child’s space a special one that reflects their personalities and interests.”

“At least not if they’re roughly the same age, sharing a room teaches valuable social lessons. It’s more a matter of how well they get along in general, and how much you space can afford,”

An Associate Professor of Development and Clinical Psychology, Esther Akinsola, highlighted signs parents should look out for in their children. Akinsola said,

“These signs would enable parents know when it is time for them to create separate rooms for their children. When one of them locks the bathroom or bedroom door when changing or asks the other to stay out, an increase in comments about the sibling being the opposite gender, or a growing curiosity about sexuality issues, gender differences, or physical changes. If one’s is already tight on space and one is reluctant to renovate or move, consider at least putting up a divider so that both can have some privacy.”