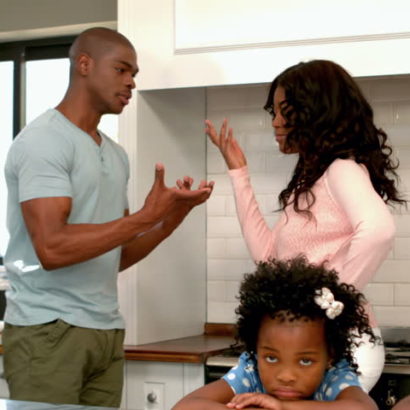 Fights in a marriage can actually be healthy—particularly certain types of fights. On the contrary, there are red-flag fights that can bring down a relationship entirely.

YahooLifestyle tapped Michaiah Dominguez, mental health counselor and relationship coach, to help us understand the importance of fights in relationships and how to spot the healthy ones vs. the relationship-destroyers.

Wait, how can fighting be healthy for couples?

Fighting gives us the chance to deepen our understanding and appreciation for one another, says Dominguez.

“Misunderstandings are opportunities that offer us clarity about our core values, priorities, beliefs and preferences while also allowing us to learn more about how our partner perceives those very same concepts.”

In fact, without conflict, she explains, we would operate under the false assumption that two completely different people should think, feel and act the same just because they are in love.

“When partners experience a rupture, both parties have the responsibility to find ways to repair, connect and move forward. That transferrable life skill will not only strengthen the relationship but will mature both individuals to better navigate obstacles in other life areas as well.”

5 Totally Healthy (and Normal) Fights to Have in a Relationship

1. A fight about money, chores or communication

Ah yes, the usual suspects. If you haven’t gotten into a blow-out fight with your partner over dishes in the sink are you even in a relationship? (We kid.) But if negotiating conflict helps couples come to terms with each other’s priorities, beliefs and preferences, then something as banal as drying the bottom of mugs before you put them into the cupboard is almost like practice for those bigger tête-à-têtes about how you’re going to spend your stimulus check.

Per Dominguez, these situational fights are often solvable problems with no real underlying issue, besides stubbornness or selfishness.

2. A fight about how you spend your time

So, you bought a Nintendo Switch to ease your mind during the pandemic and now you’ve graduated to Red Dead Redemption on your PS5 for six hours a day, ya know, just to relax. Your husband is not pleased. But maybe you’re not into how he calls his parents on speakerphone to gab all night.

Again, as Dominguez explains, these are solvable fights. Sure, maybe you’re both going through something right now, but a good healthy fight can land your relationship on more solid ground while empathizing with what your partner is going through.

3. A fight about when to have children or where you should live

Unlike a solvable-problem fight, this type of fight is filed under perpetual problem—it’s deeply rooted in your worldview, identity and experience. This doesn’t mean one of you might not change how you feel about having children or when to move to that mountain house, but the fight you’re having about it? It’s probably not the catalyst for changing anyone’s mind.

So why is this considered a healthy fight? Says Dominguez:

“There won’t be a solution to these problems, but they can be navigated successfully if both of you are willing to discover, understand and respect the deeper meaning of your partner’s perspective.”

And worst-case scenario, you never bring this issue up (or ignore it) and you find yourself in a long-term relationship where one of you might be deeply unhappy because you never had this fight.

4. A fight about your sex life

Same goes with sex. Our wants and needs when it comes to the bedroom are profoundly personal, and they’re not going to change because someone wants us to.

But that doesn’t mean we shouldn’t hash it out at various checkpoints throughout our relationships. Whether it’s about frequency or exploration, you might not agree with your partner’s desires, but not bringing them up can lead to alienation and contempt.

1. Fighting with the goal of changing your partner

“When we try to convince our partner that our way is best and that they should change to accommodate our ideals and expectations, we send the message that they are not enough,” Dominguez warns.

This can make your partner feel like your love is conditional. “And until they bend to our demands, they are unlovable,” she says. What’s worse is that asking (or demanding) that your partner has to change can also have underlying tones of contempt, while putting you in a position of moral, behavioral, or intellectual authority.

Long story short, says Dominguez, “Trying to change your partner is manipulative and flat out mean.” So instead of saying in a rage to your partner, “You always put your friends before me because you’re selfish!” Try a more vulnerable “I statement” approach that puts the real issue on the table: “I feel like a second thought when you spend all Sunday at Bob’s and don’t call.”

When fights become more about hurting your partner than the topic at hand, you’re in dangerous territory. “This type of fight can destroy a relationship through emotional warfare…Name-calling, exaggerating flaws and withholding affection all lead to feelings of invalidation and isolation,” explains Dominguez.

Fighting dirty happens when we lose sight of the real issue out of fear of being vulnerable or because you’ve been through this dance so many times before. This type of argument is a defense mechanism that takes a lot of work but doesn’t get you very far.

3. Fighting that abuses power and control

The worst kind of fight there is, according to Dominguez, is one that exhibits an abuse of power and control.

How is this different from fighting dirty? While they may be on the same spectrum, abusive fighting isn’t a one-time tactic or momentary outburst; it’s enduring and corrosive.

So what should you do if you’re experiencing this type of relationship-destroying fight? Terminate this relationship ASAP. “These types of fights typically worsen over time and are most difficult to recover from,” guides Dominguez.