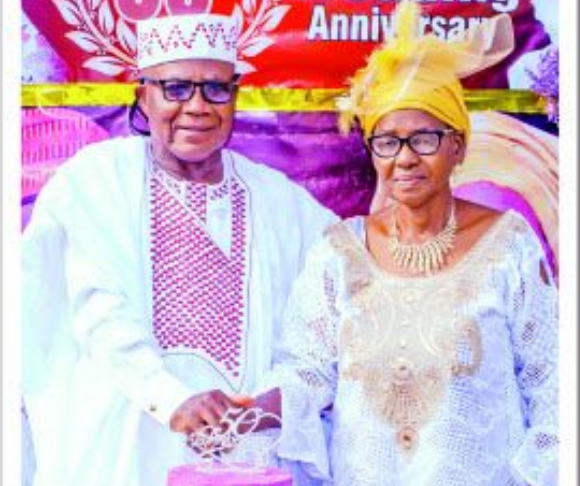 Solomon Haruna from Ogodu village in Omala Local Government Area of Kogi State has been married to his wife, Joy, also from the same local government, for more than 50 years.

Haruna was Chief of Staff to Isah Odoma, former Deputy Governor to the late Aper Aku, in the old Benue State.

He is also a retiree from the University of Agriculture, Makurdi, where he rose to the position of Dean of Student Affairs. His wife retired in 2007 from the staff school of the same university.

In this interview with DailySun, the couple who are also grandparents shared their marital experiences and talked about, among other things, secrets to long and successful marriage, their relationship with in-laws, how they met and what made them go for each other.

Some couples have this inbuilt idea that in-laws are necessary evils. How have you been able to grapple with that in over 50 years of your marriage?

Joy: Yes, I hear people say that their in-laws hate them and so on. But for me, it’s a different story. My in-laws are like my brothers and sisters. They come to our house, we go to their houses. I don’t have the problem of an in-law being a thorn in the flesh to us.

Solomon: I will say the same about my in-laws because none of them has ever troubled us here. That’s why our house is always full. We have about four or five people staying with us now that our biological children are no longer here. We thank God for that.

Solomon: There was a time I thought my work was the first thing in my life and would rush out of the house without praying every day. It’s not that I didn’t like prayer but she insisted that we should pray. She was the one who called my attention to it constantly and I thank her for it because, for more than 30 years now, I have gotten used to praying every morning.

They were doing that in her family, so she became accustomed to it. But I come from a pagan home and we were not used to that kind of thing. And when I started work, the idea of punctuality was uppermost in my mind. I used to be the first to get to work in my office and the idea of going late to work or church doesn’t resonate with me at all.

Up till now, even as a retired person, I don’t like going late to any function. But then, we had to adjust to pray together. That is her strong point on my life. She always voices out her conscience whenever she feels that I am wrong.

Joy: First of all, Daddy (meaning her husband) loves me and my people. Some of my sisters even testify to this. If any of my people were sick, he would go out of his way to attend to them. Whatever they needed, if he can afford it, he would help them. He has never said this one is not my sister or that one is not my brother, or these ones are not my people. Daddy loves all of us together. He loves his children too.

We thank God for keeping both of you together as husband and wife for over 50 years. Could you tell us how you met before getting married?

Solomon: I met her much later after I had known her father. He was the pioneer Christian evangelist in our village then. I heard the Word of God for the first time through him. I didn’t know he had a daughter because she was not brought up in the village. But one day when I came to visit the man, I saw her.

It was kind of love at first sight. We didn’t communicate but I said within me that if God could give me this woman to marry, I would be glad. Then a little friendship developed. But she later went back to school. I also went back to school. We didn’t communicate again for a long time. At that time, when she came to stay with her father in the village, she was in a boarding school.

During the holiday, we met again and started talking. It was much later that I proposed to her in a very sheepish way because both of us were young. She didn’t quite say yes as such, initially, but later on, she said yes. But we were far apart from each other because the telephone was not as common in those days as it is now. Communication by letters in those days took weeks if not months.

So, how did he propose?

Joy: When he proposed we were too young and inexperienced to envisage opposition. His mother was vehemently opposed to our marriage on the grounds that we are related. But both of us resolved that if it is God’s will for us to marry, we would.

For how long did you court?

Solomon: It took us about five years because I was in Lagos and she was teaching in Idah. Communication was not regular. To come home was a problem. By the time the issue of a relative or no relative was resolved and they gave us the go-ahead, my leave had expired. So, we arranged our wedding in Ibadan. So, between the time we first met and when the marriage took place, was five years.

What made you choose each other above other eligible spinsters and bachelors at that time?

Solomon: First, her beauty. That was the first thing that attracted me to her. As I said, I never knew that she was the daughter of the man that I knew. Later, when I got to know, we began to meet in the church whenever I was on holiday.

Joy: He too was a handsome man. We played together. My father used to invite him to come over to our house and he would stay in our house and help us do things. That was how I became familiar with him.

BBNaija Star, Erica Tells Us Why She Won’t Be Rushing Into Marriage

What was your first quarrel after marriage and how were you able to resolve it?

Joy: I can’t remember. The one I remember vaguely is that there was a day I cooked moimoi and he complained that the salt in it was too much. As I was coming, he just threw the moimoi at me. I was shocked by his action. We had a disagreement as a result of that but later we resolved the matter. As I said, because we know God in our hearts, whatever grievances we had, we would go and tell Him. That is how we usually resolve our issues.

What do you remember most about your wedding day?

Solomon: There was something that happened. My colleagues in the office said they wouldn’t attend my wedding because I told them I wasn’t going to serve them alcoholic drinks. That troubled me a lot. They connived and threatened me every day.

I thought they were serious. Lo and behold, on the wedding day, they all came. I was so happy. There were white men in our office and the most senior of them I never thought would attend my wedding, came. So, I was overjoyed.

Some American missionaries came too and the whole church was full. That gave me a lot of joy that people felt I was important enough for these people to come and celebrate with me. That was the exciting experience I had that day. The fact that I am now a married man, married to the love of my life also gave me a lot of joy.

SEE ALSO: Kogi-born Veteran Soldier/Journalist Give Beautiful Accounts Of How They Have Fared As Couple In Their Happy Marriage Of 50 Years

What is your advice for the young and intending couples?

Solomon: There is this problem of expecting too much from your spouse, believing that you’re going to marry an angel. The first few months of marriage are usually a very difficult period because you are trying to adjust. It’s unfortunate that these things are coming out because of too many expectations from each other. Things cannot work in such a situation.

I believe that the issue of love and acceptance are very important in marriage. You accept your spouse for who he or she is and begin to live with it. But your spouse is not the only one who would need to make adjustments; you too must be ready and willing. When our children started getting married and they would have some of these initial quarrels with their spouses, we would tell them that it is normal to have quarrels because it is a part of the adjustment we are talking about.

And they would say: “Daddy, but we didn’t see you and Mummy quarrel.”  I would say that it’s not as if we didn’t quarrel or disagree. We did but we didn’t allow you to know or see it because our disagreement didn’t concern you. That’s why we didn’t bring it to your knowledge. The only advice I have for young and intending couples is that they should return to their first love and maintain it and accept each other and keep on forgiving.

Joy: In addition to what Daddy had said, first of all, in coming together, let them commit themselves into God’s hand through prayers.

Couples need to tell God to lead them because this journey is not our making; it’s by God’s grace. So, when you commit yourselves to God at the beginning and allow Him to direct your life’s journey, things will turn out well.

Then, submission is also paramount. Husbands and wives have to be submissive to each other. The submission should be total and not partial. Continue to submit to each other in love because it is love that brought the two of you together in the first place.