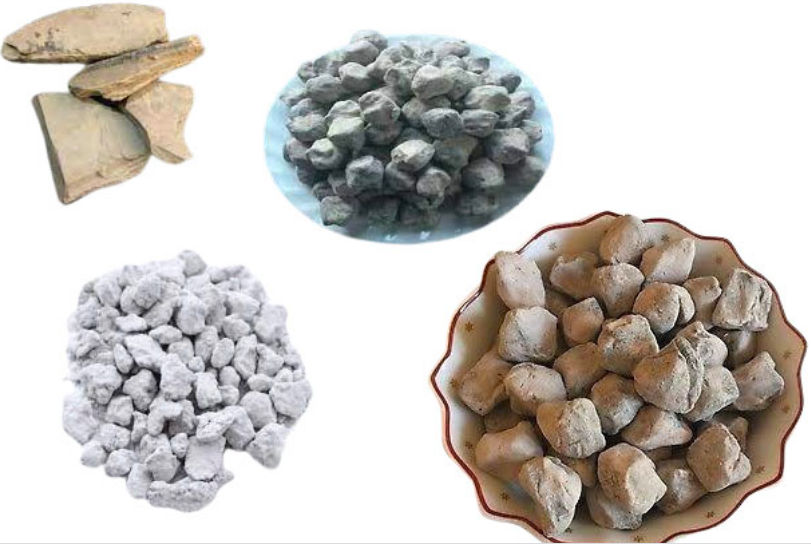 Calabash chalk is also known as Nzu in Igbo; Ndom in Efik/Ibibio; and Eko in Bini/Edo languages. It is found and obtained usually from the soil (mining pits), and occurs naturally as a light brown to almost white solid, which is relatively soluble in water.

Experts say that, being an earth material, Calabash chalk may be contaminated with microorganisms or heavy metals, which may even increase with processing and or storage.

Nzu contains heavy metals whose qualitative and quantitative compositions vary with respect to the geographical location of the chalk, scientists say, noting, that it is believed that aluminum forms one of the major constituents, probably because of the presence of kaolin clay group in most Calabash clay. Other constituents of Nzu include, lead, arsenic, and chromium.

As of 2017, the Texas Department of State Health Services and Food and Drug Administration had raised concerns about the potential health risks from Calabash chalk consumption, especially by pregnant and breastfeeding women, in view of lead and arsenic contamination.

Nwoke, who works at St. Charles Clinic in Urum, Awka North Local Government Area of Anambra State, told the News Agency of Nigeria that Nzu contains high level of lead, which could poison an unborn baby.

According to a study published by the United States agency, National Institutes of Health, Calabash chalk is marketed in the raw form or processed by combining clay, sand, wood ash or salt; packaged as powder, molded blocks or pellets and is readily available in open shops.

SEE ALSO: How Heavy Metals In Our Foods & Environment Cause Infertility

The study, co-authored by Jonah Sydney Aprioku and Ezinne Margaret Ogwo-Ude, both of the Department of Experimental Pharmacology and Toxicology, Faculty of Pharmaceutical Sciences, University of Port Harcourt, Rivers State, states that Calabash chalk is consumed by many because it is believed to have various ethnobotanical uses.

“It is also used for the treatment of skin diseases, foetal growth and wellbeing during pregnancy, and sociocultural activities.

“In general, pregnant women gravitate more toward calabash chalk consumption in humans. They use Calabash chalk as remedy for morning sickness and to satisfy their increased appetite and other peculiar desires,”

According to the researchers, Wistar rats exposed to Calabash chalk experienced inhibited maternal weight gain, while uterine implantations [the stage of pregnancy at which the embryo adheres to the wall of the uterus] were absent in 85 of them.

Again, the researchers said, uterine weight and the number of foetuses formed in uterine horns of pregnant rats exposed to Calabash chalk decreased, compared with rats under control.

In addition, there was abortion, as well as stillbirth in pregnant rats exposed to Calabash chalk, while foetuses that survived to delivery stage were sluggish and pale. In conclusion, the researchers said,

“The results suggest that Calabash chalk has a negative relationship with maternal health and pregnancy outcome.”

Dr. Nwoke said the chalk is a natural product, locally prepared from clay, sand, salt and other non-nutritional components, noting that craving for the chalk is not peculiar to pregnant women and teenagers, as even men eat it.

Nwoke said there was no scientific evidence that Calabash chalk relieves nausea, vomiting or stops morning sickness in pregnancy as many have been made to believe.

“Eating Nzu is a practice that has become addictive to many. Some started it because of pregnancy craving, while, for others, it can be due to iron deficiency anaemia and malnutrition.

She said that she had seen many people being treated for lead toxicity, inflammation of the stomach (gastritis), very low red blood cells (severe anaemia), ulcers, and nerve damage  due to chronic consumption of Nzu.

The UNIPORT researchers, Aprioku and Ogwo-Ude, said that most of the effects observed in their study were dose-dependent.