Nigerian songstress, Simisola Ogunleye, professionally known as Simi took to social media to encourage young girls to love themselves rather than trying to live up to unrealistic standards on social media.

According to the music sensation and mother-of-one, social media has killed the self esteem of many young people in their quest for validation. The songwriter encouraged self-love while condemning the practise of trying to live up to social media standards.

Simi then urged the younger ones to do things that make them happy rather than impressing or seeking the approval of other people and also endeavour to let people see their true self like posting a photo without a filter.

“Yo LOVE YOURSELF as you are!! It’s great to do things for yourself that you want… But the moment you become consumed with looking or presenting yourself a certain way, so people that honestly, truly don’t care about you on social media can tell you you’re popping -it’s only downhill from there.

Because you’ll keep on giving up parts of your true self until there’s nothing left. Its human nature. Please, I beg you. Let the most vulnerable version of you be enough. LOVE YOURSELF. VALIDATE YOURSELF. because you’re enough. You will always be enough.

Nothing wrong with doing something that makes you happy, just make sure it’s your approval you care about – not random peoples’.

I’m actually super concerned that young girls will have to work harder for a healthy self esteem. Because they’ll be trying to live up to a standard that does not exist.

Maybe today post a picture of yourself you think is too ‘basic’ for social media. Post a pic of yourself without a filter if you haven’t in a long time. If not today, then tomorrow or the day after. Without filter and makeup, it’s funny how similar we are.” 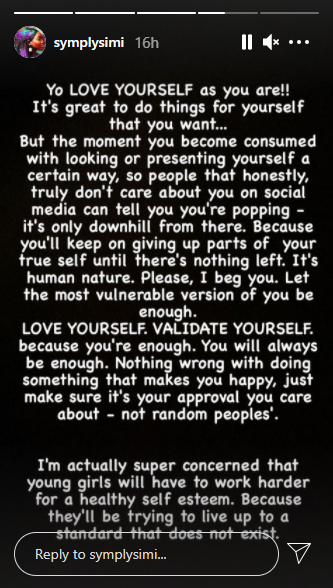 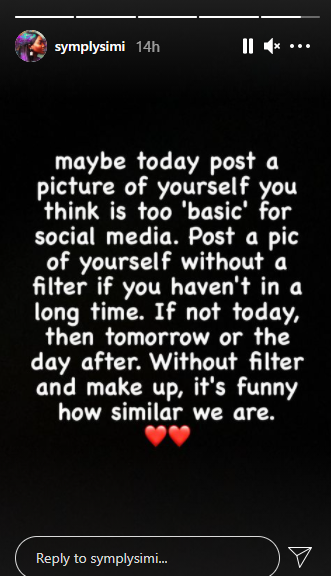