Nigerian songstress, Simisola Ogunleye, popularly known as Simi took to Twitter to share her worries about the struggles women go through in their journey to becoming successful in a male-dominated world.

In a series of tweets posted via her Twitter page, the pregnant star who couldn’t hide her anger stated that women are so strong and sweat blood for a spot at a table that disrespects their sweat. She added that women also end up convincing people that they deserve a spot at the table.

”If I didn’t vent, I woulda stayed mad. How’s your day going?

I woke up angry today because of a conversation I had before bed. Women are so strong. So OBVIOUSLY strong. You sweat blood for a spot at a table that disrespects your sweat. Then you spend EVERY SINGLE DAY convincing people you belong there. And the damn table isn’t even all that.

And when you say “Fuck it. My life, my rules.” They ask why. It’s because it never ends. Nothing is ever enough. And complaining is a waste of time. This is why most of the women that STAY winning have to win on their own terms. Ass-kissing is exhausting.” 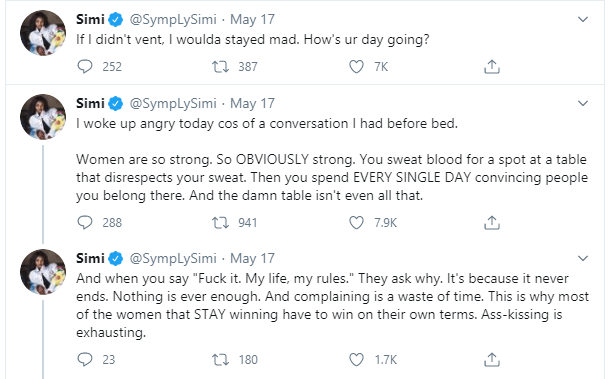 Simi, who is expecting her first child with music star, Adekunle Gold is known to be quite vocal about women, feminism, and the need for equal rights.

Recall early in the year when she shared the now-famous controversial tweet about men and being vulnerable because of feminism. She tweeted:

”Feminism makes many men feel so vulnerable because you find that society that gave you your “superiority card” is starting to know (and want) better for women – and you dunno wtf to do. Lol. Gag is, if you support us, life is better for everyone. Don’t be afraid of Blue heart.”

She went on to talk about the reason women have decided to become men which according to her is basically because of the benefits that come with it.