Hate her or not, Nigerian mum-of-one and feminist, Ozzy Etomi, will say what she has to say, and she will do so even if she stands alone.

The Nigerian creative writer, marketing and communication strategist recently took to her Twitter page to dish out an advice to the ladies on the kind of men they should never settle for.

According to the storyteller, there are two types of men that exist in the world and they are the ‘oh wows’ and the ‘let me sort it out’ and she cautioned ladies against dating those who say ‘oh wow’ in the face of any challenges they encounter.

“Lmao I remember when I first moved back and I was seeing this guy, I was driving to hang with him and suddenly my car stops. I had kinda just started driving so I was so nervous. I was close to his so I text him saying my car had stopped, and he replied saying “o wow” & that was it.

Some street side guys had to call some roadside mechanic for me who helped me sort out whatever the issue was. Dude text me “are you still coming?” and I just drove my ass back home and that, as they say, was that.

There are two types of people in this world. The “oh wows” and the “let me sort it out”. One time when my friend & I’s flight got unceremoniously cancelled, she called her man to tell him. Before we could say Jack Robinson, mans got 2 tickets for us on another airline.

I refunded my bit of course but it was the thoughtfulness and the action for meee. So ladies, don’t settle for an “oh wow” ass nigga, get you a “sort it out” nigga. Cos effort is sexy.”

SEE ALSO: See The Category Of Women Ex-Presidential Aide Describes As Having Multiple Identities And Why Young Men Should Avoid Them 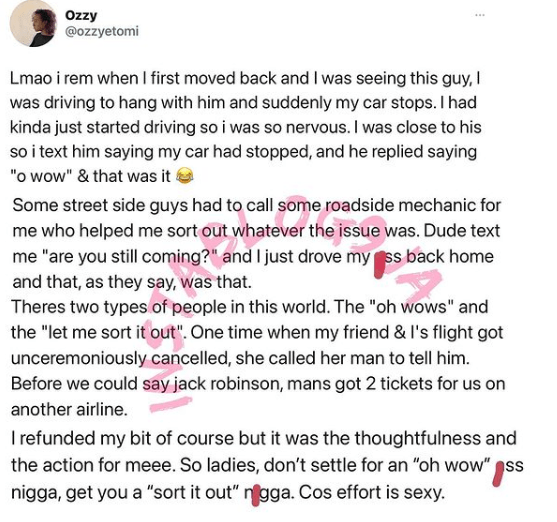 3
SHARES
Share on FacebookTweet thisEmail to friends
Tags
“let me sort it out” “oh wows” Category of men Ladies Ozzy Etomi Settle for
Jumoke Simi May 13, 2021