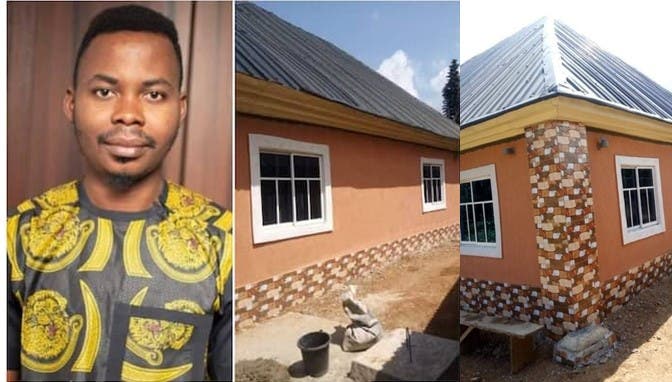 A Nigerian linguist, Maazi Ogbonnaya Okoro has shared the touching and sweet story of how he changed his mum’s story for sacrificing everything for him and his siblings when their father died.

Taking to social media, the proud son shared photos of the beautiful four-bedroom house he built for his mum as he relived how the wind blew off the roof of their old house after he returned home from his National Youth Service Corps (NYSC) programme years ago.

Ogbonnaya who is a graduate of the University of Nigeria, Nsukka, said he vowed to make his mother proud now that she is alive, so she can enjoy the comfort of life.

According to him, following his dad’s death in 1997, his mum became both the father and mum and never remarried so as to invest her time into raising them.

Read the full story below…

“A little 4 bedroom flat bungalow gift from a son to his mother. The boy lost his father when he was just 4. This woman has been a widow for the past 24 years. She became the father the boy grew up to know.

The boy would watch his mother struggling to feed him and his siblings.

Some relatives made life unbearable for her too. The boy watched her toiling, starving herself to feed her children.

While in primary 4, the little said enough was enough. He must do something to support his mother.

He started selling water in the market and later became a sale’s boy. Mother tried to stop him but the boy was stubborn. In Primary 4, the boy bought his mother a cooking pot from the money he saved. The mother cherished that pot and still preserve it till now.

This didn’t stop the boy from taking first position from primary one to finishing. He was a hustler who believed in changing narratives for good.

SEE ALSO: Civil Engineer, Adewale Adelodun Appreciates His Super Mum As He Reminisces On The Huge Sacrifices She Made To Make Sure He’s Educated

After the lost of her husband who was doing well before he died of accident in 1997, she was asked whether to remain or remarry. Mother said she must remain and bring up her lovely husband’s kids.

The boy’s name is Ogbonnaya. The boy was named after his father. The name follows him. He acts like one. Making sure his mother’s needs are met.

The woman was so supportive. She would punish the boy for associating with some boys she thought might deceive him.

The boy thought mother was being wicked. But he would later see she was rightly protecting him. As the boy was growing, he loved books. He made uncompleted building his home. He read books and write books there. His mother would tell his siblings not to disturb him.

The boy should be left alone.

Going to the university of Nigeria Nsụka at the age of 18. Mother was at ọmụgwọ and didn’t know when the boy sneaked out to find his way after those he looked up to decided to choose his fate for him and he refused. Life was a bet.

The boy took his own fate and left to find his future. The boy would be pretending that all was well so that his mother would not get BP. He would squeeze some money and send her, claiming business was going fine whereas he barely fed.

At Nsụka, the boy made name as his books became a national anthem in some high institutions. The day he graduated and went home, his mother killed a cock for him to celebrate his success.

After NYSC, the boy went home. In the minds of everyone he had no job.

And yes, he had no job. That very midnight, the rain was heavy. Wind blown off the roof of the house his father built years ago. He saw the mother crying. He didn’t talk. His mind was wandering over what to do.

In the morning, the boy said to his mother:

“Go and call me a carpenter”.

Mother replied: “where did you see money to roof the house? Where? You don’t have a job yet”.

The boy chuckled. “Call me a carpenter first”.

“How much will it cost to pull down this whole roof and reroof it again?”, the boy asked the carpenter who also was shocked. Person wey no get job dey talk of roofing a house.

Off they went to building materials. Few hours later, truck full of woods and zinc arrived the compound

Mother and neighbors were shocked but the boy has no job. How come? Before getting to night, the house was roofed. The next day, the boy left on low-key. It was a news. “A boy who just came home roofed their house after NYSC. Did he know the house will fall before coming home?”

Muslim Couple Who Have Been Married For 30 Years Share Their Journey, Challenges And Triumphs: ‘Divorce Not Solution To Marital Challenges’

The boy now said: “it’s better to build this woman a befitting house. She needs fresh air now she’s alive. Not when she’s gone, I will start building house in her absence just to impress people. She needs to enjoy herself now. She has passed through a lot.

It is time for her to enjoy. I don’t mind denying myself some luxury and comfort”.

He called JW Nomic Nweji Michael the CEO of Nomic Constructions Ltd and told him to draw him a house so that he’d be looking at the drawing. That was how the project started.

Within a year, it’s completed. He didn’t even go home. He trusted the engineer who was doing everything and sending him photograph.

This is me saying, thank you for being my mother. Thank you for making sure my father’s name did not wipe out from the surface of the earth.

You call me “di m”. You give me advice daily. You pray for me daily. You passed through a lot, starve yourself so that I could eat.

I don’t have much to say, thank you mother. Afọ mụrụ Odogwu. Afọ mụrụ Maazị, this is your house. I made sure I built it to my own taste.

Manage this small thing. Who knows? My next project for you will be bigger. Because you deserve everything good and perfect. Ị mụrụ Odogwu.

I don’t need to be Dangote before I do this. But then, I have to do this.. 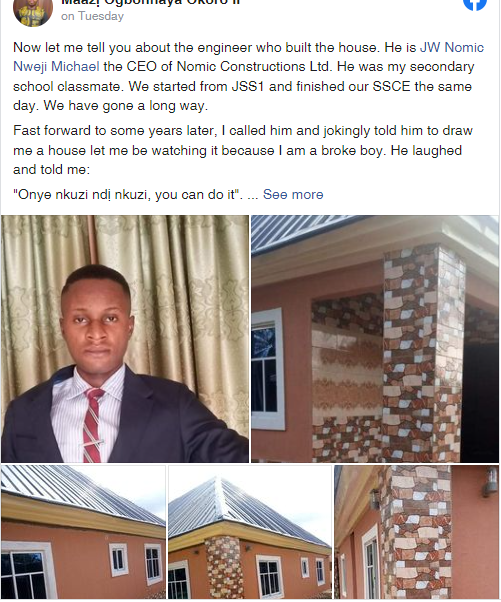