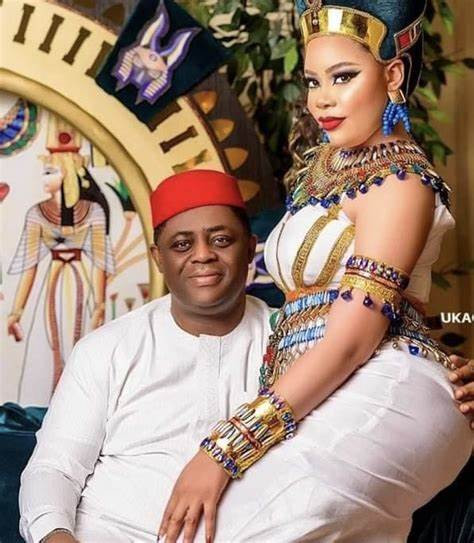 ‘If Kayamata Is Not Working On You, How Can A Little Girl Of 21 Control You?’ – Jaruma Hits Back At Ned Nwoko In New Instagram Post

Former Minister of Aviation, Femi Fani-Kayode, has again hit back at his estranged wife, Precious Chikwendu over claims that he has erectile dysfunction and being told she can’t see her kids because one of them has COVID-19.

We reported yesterday that Precious who didn’t mention any name in an Instagram post she shared, wrote that “his lawyer just casually threw it that one of my sons has COVID whilst having an argument in court as reasons why I won’t be allowed access to my kids”.

Precious also claimed that she was unable to consummate her marriage for 6 years because the former minister allegedly had erectile dysfunction.

Miss Chikwendu said the four children she had with Fani-Kayode were conceived via artificial insemination. She told the court that she was forced to be celibate during the time they were together as a couple.

She also told the court that the former minister did not perform any rites before their marriage nor paid her bride price. She, therefore, prayed the court to declare that she was never married to Fani-Kayode.

Like she has done several times, Chikwendu accused Fani-Kayode of assaulting her while they were married, adding that the former minister lied to her that his marriage to his third wife had ended.

Reacting through his lawyer, Ayodeji Sunday Ibikunle, Fani-Kayode stated that the mother of her kids is “suffering from bi-polar disorder, clinically unstable, mad as a hatter and is prone to telling monstrous lies and making delusional statements.” He also denied that he physically abused her while they were married.

Ibikunle maintained that they will be meeting in court and his client’s ex-partner will be ”exposed.”

READ ALSO: FFK’s Ex-Wife, Precious Chikwendu Opens A New Can Of Worms On How She Was Unable To Consummate Her Marriage For 6 Years Because Her Hubby Had…

“We are constrained to point out the fact that Miss Precious Chikwendu, the former partner of our client Chief Femi Fani-Kayode, Sadaukin Shinkafi, is suffering from bi-polar disorder and schizophrenia and we acknowledge the fact that she is totally insane.

Ordinarily we cannot be expected to respond to the crass, filthy, delusional, sallacious, disgraceful and absurd allegations of an insane person.

We appreciate the fact that Precious is clinically unstable, is as mad as a hatter and is prone to telling monstrous lies and making delusional statements.

A glaring example of her degenerating mental state is the pernicious and specious lie and diabolical fabrication from the pit of hell that any of Chief Femi Fani-Kayode’s sons is suffering from COVID 19 or that any of them has head injuries. And neither is it true that his lawyers made any such claims in court or elsewhere.

ALSO SEE: ‘I Had The Most Violent Experience’- FFK’s Estranged Wife, Precious Chikwendu Shares Harrowing Details Of Alleged Abuse While In The Marriage

Precious Chikwendu, who has made these sinister and cruel claims about her own children, is not only heartless, dangerous and delusional but is also nothing but a pathological liar with a troubled and twisted mind that is in urgent need of medical attention.

Other than to make the above clarification we will continue to ignore her rantings, falsehood and mendacious fabrications and to pray for her recovery.

Meanwhile we will meet her in court where she will be exposed for who and what she is and what she suffers from.”