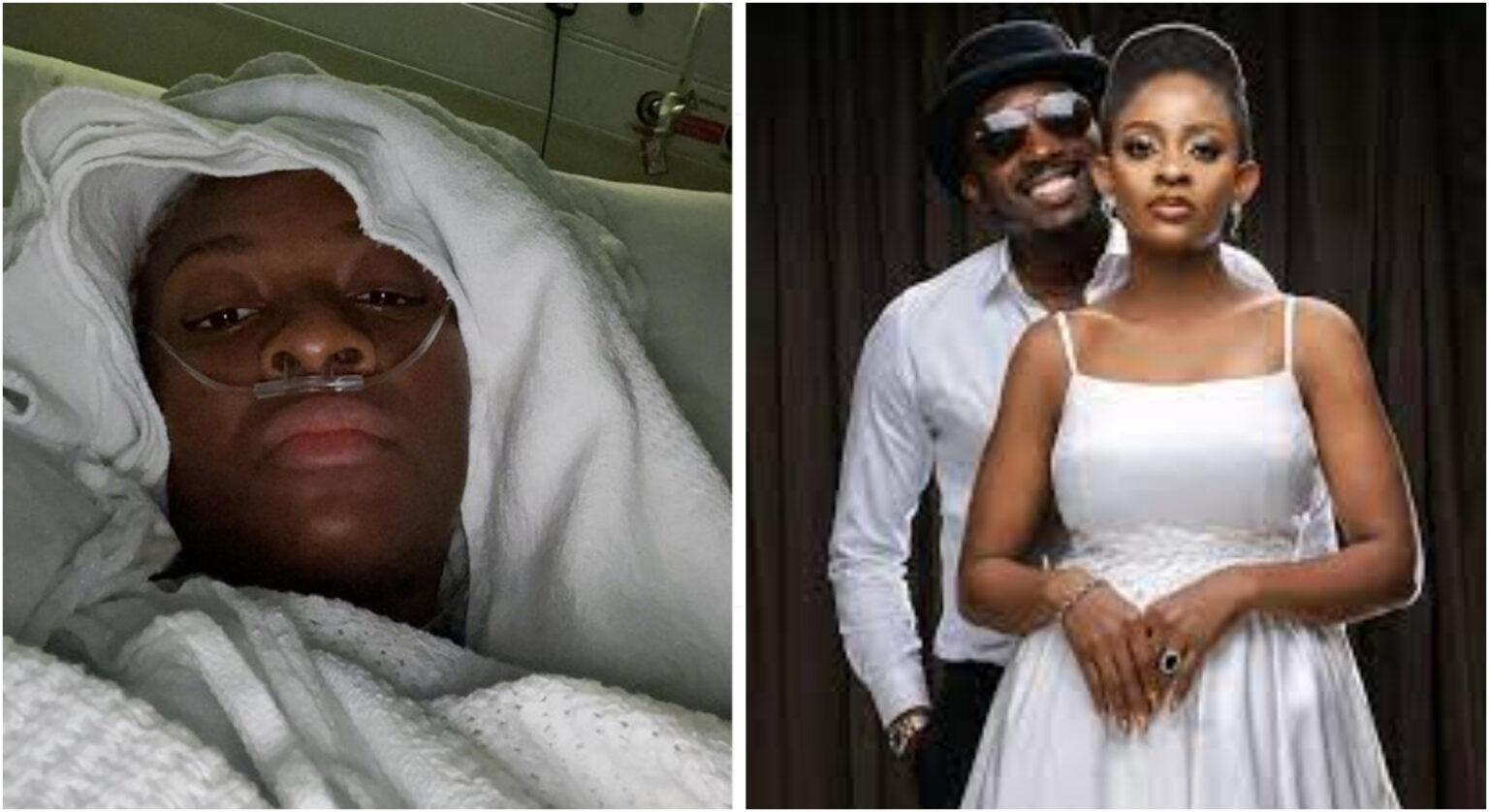 Kris Asimonye, wife of popular Nigerian comedy star, Bovi, has expressed gratitude for life after undergoing a surgery for an ectopic pregnancy which ruptured one of her fallopian tubes.

A pregnancy is ectopic when the embryo fails to attach inside the womb. An Ectopic pregnancy occurs when a fertilized egg implants in a location outside of the uterus, most commonly in one of the Fallopian tubes or the neck of the cervix.

Sharing her experience, Kris disclosed that it all started with an excruciating pain after she had packed her luggage on Friday January 14, for a flight back to Lagos on Saturday January 15.

After undergoing series of tests, it was discovered that an ectopic pregnancy ruptured her womb and she immediately had to be operated on.

I had packed up my luggage preparing for my flight back to Lagos the next day being Saturday.
But then I woke up with an excruciating pain. I couldn’t move, I couldn’t even turn, I had to stay still to control the pain.

I couldn’t control it, I reluctantly called my husband. He had asked me to go to the hospital several times in the days leading up to this moment.

SEE ALSO: Princess Recounts The Ill-treatment She Suffered At The Hands Of Her Ex-husband During Ectopic Pregnancy

30 minutes later, this pain still wouldn’t go away. My husband again, asked me to go to the hospital but I said no.

“I’ll be fine don’t worry, tomorrow I’m back home”. I have a 10 O’clock at David’s school, I can’t miss it.”
I took some pain killers, and it seemed like the pain was finally beginning to go down. I could stand upright at this point.

About an hour later, I started to feel like I was going to pass out. I called 999 but I couldn’t speak, then I passed out. Somehow, I miraculously woke up to numerous missed calls from the emergency service.

I got up, put on my wig and found myself heading to see my son in school whilst in pain. I had genuinely assumed the pain had subsided.

I promised I’d see my son by 10am and I wasn’t going to disappoint him, so I pushed my pain aside, ordered a taxi & found myself limping to his school.

The minute David’s school nurse saw me, she could tell that I wasn’t okay. God used this lady to force me into a car and she specifically asked the driver to take me straight to the hospital. 2 hours later, I passed out again while waiting to see the doctor and the nurses were not even aware of what was going on.

By the time I got back into the GP’s office, she was going to send me home. All the tests done for signs of infections came back negative and the last bit was to do a scan “There’s no opening for a scan for you today, they are fully booked, you’ll have to come back tomorrow”.

I responded with the little strength I had left; I can’t go home without seeing the doctor. I just fainted again, I had fainted twice today.

ALSO SEE: Identifying The Risk Of An Ectopic Pregnancy + Everything Else You Should Know About It

They placed a call to the gynecologist and the next thing I heard was; get her a wheel chair and take her to the gynecology & maternity ward. God did it!! Suddenly, they said I could do a scan same day…..

The report; “I’m sorry you have an ectopic pregnancy and it’s ruptured in one of your tubes. You are bleeding in your tummy. You have to go into surgery immediately.”

In a matter of minutes, they were prepping me for surgery. COVID test, setting up a line, just movements in and out of the room …. I couldn’t process what was going on.

I needed strength at that point, I couldn’t even pray. I couldn’t call anyone because the last thing I wanted was panic. So it was just Bovi, and 2 of my friends (Nwando & Kaine) who already knew what was going on.

For the first time in my life, I really craved for strength. And it was beyond physical strength.
I was physically, emotionally & mentally drained. Nwando and her mum had rushed down to the hospital the minute I told her, Bovi was in panic & I.. I just hoped in God.

“This new year, I am alive and well and I’d be back home to my family and this party called life; soon.”

She shared this video … 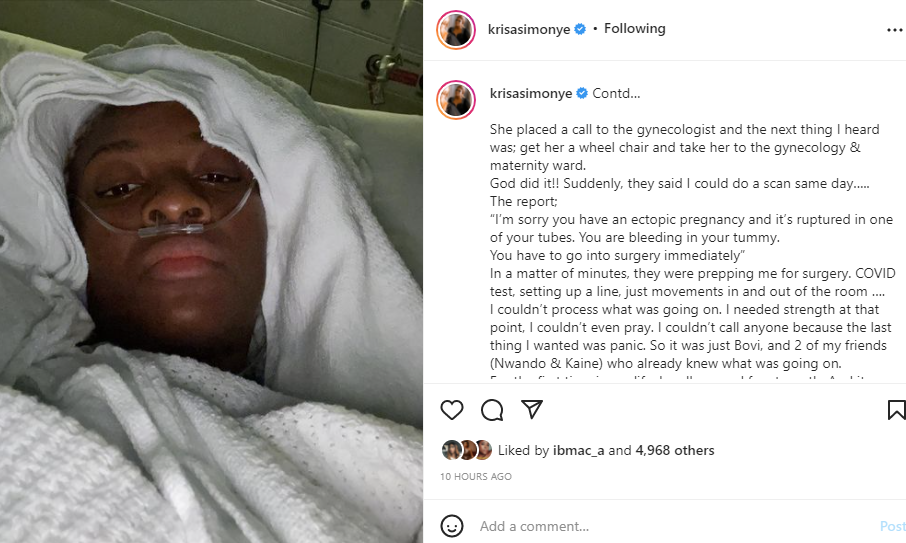