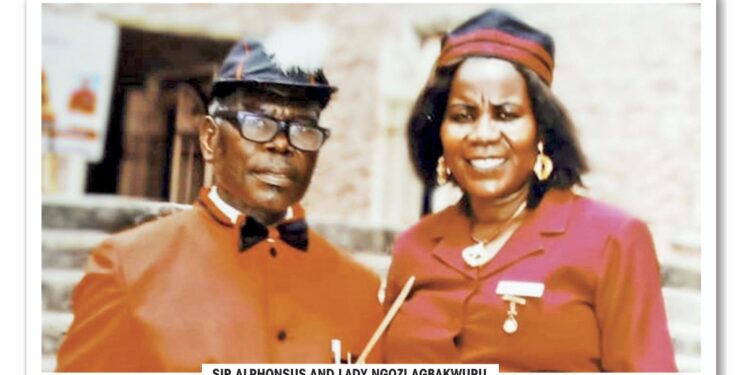 Dr. Alphonsus Onyekachi Agbakwuru, a knight in the Anglican Communion, and, at present, Head, Department of Computer Science, Imo State University (IMSU), Owerri, and his sweetheart, Lady Ngozi Agbakwuru, a school proprietress, have been married for 33 years.

In a chat with DailySun, the couple went down memory lane on how the journey started, how they were able to overcome challenges posed by their union even as they leave some instructions for the newly married and intending couples.

We know this love story started somewhere. We would like to know when, where it started, and how long it has been.

Sir Alphonsus: It is a very simple process that started in 1982. Then I was in my third year in the university. I came back home on a long vacation and went to my brother’s shop. I saw a young lady buying things. Ordinarily, I wasn’t much attracted to her. But an incident occurred that made me to become interested.

I asked her: why she was buying those items? She said she was preparing to go for a GCE exam at Aba. The little interaction we had about the courses she would like to read made us to develop some interest in each other. We exchanged addresses and she left.

Is it the same story with you? Or, do you think he is missing something?

Lady Ngozi: It’s essentially the same story because as a little girl at that time I was not thinking of marriage. I never knew that my interaction with him that day would make him interested in me. But as time went on, he opened up and the journey started.

Would you say it was love at first sight?

Lady Ngozi: Not really. As I told you, as time went on, I started developing an interest in him. When he noticed some attributes in me and proposed, that was when my own love started.

You mentioned courage, and intelligence as some of the attributes that endeared you to her, tell us specifically what you liked most about her?

Sir Alphonsus: The boyfriend-girlfriend issues were not part of our thinking. I was already a member of the Scripture Union. Initially, I never asked her name. But her friends then were calling her by her name. I did not tell her anything. I just forgot all about her and went back to my school.

Can we put it this way: you fell in love with this school certificate holder then, despite your ego?

Sir Alphonsus: That’s it. Initially, I wasn’t interested in her but I found out that she was an intelligent person. She was also morally good. I asked her to come and see me. But she refused. It’s unlike these days when girls would have jumped at the invitation.

All these heightened my interest in her. It was such that when I went home I did not hesitate in telling my eldest brother about her. When I mentioned her name, he said: ‘let’s go and see her parents.’ That’s how I was able to meet her parents as time went on.

Was there any opposition from your people regarding your decision to marry her?

Sir Alphonsus: Yes, there was very stiff opposition from one of her eldest sisters. The problem then: I was an Anglican and they were Catholic. The problem then was such that if a Catholic person allowed an Anglican to marry his or her daughter, first and foremost, the Christian Women Organisation (CWO) would excommunicate her mother from the church.

So the eldest sister who was already married by then said how could her mother be treated in such a manner? My mother too said if they wanted to take their clothes let them take them. Meanwhile, my fiancé then was finishing her school certificate while I was in my final year at the university.

SEE ALSO: After 26 Years, Chief And Lolo Ugwuanyi Tell Us How They Conquered All Barriers In Their Marriage

Apart from your eldest sister, is there anybody else that opposed the marriage?

Lady Ngozi: In my family, we are disciplined; we don’t entertain male visitors. So one day he came to ask for me. I was called and told that someone was looking for me. I hid at the backyard and said I was not coming. One of my elder brothers told him to go, that the person he wanted to see did not want to see him.

He left. The following day he came again. This time around, they brought out a cane and try to chase him away. But he stood his ground and called some of his elderly ones to meet my father to make his intention known to him.

Could you recall what happened after this?

Sir Alphonsus: As she told you, I went with my people and my father-in-law told me that I was free to come to his compound to talk to her. But she would never step out of his compound with me until when I was ready.

Those were the days when parents had absolute control over their daughter’s life. Her father saying yes meant she had also said yes. But it was not the era of kneeling down to say:  “will you marry me?”

What really made you to say yes to his proposal?’

Lady Ngozi: A lot of things. First of all, he’s caring, humble and a good Christian.

Besides that, were you also won over by his looks?

Sir Alphonsus: If you were in the university in those days, girls would like to throw themselves at you. Now you met someone who said ‘if you want to see me, go and talk to my parents.’ That was enough to know that she is marriage material.

To what extent did her physical appearance or beauty play a role in helping you to arrive at a decision to marry her?

Sir Alphonsus: Of course, the eye would see before the mouth would eat. Yes if she was not beautiful, I might not have considered other things. We’re human beings. I was looking for a slim person and she was slim, of average height, and at least a little bit taller than I am. I know that I’m not that tall but I saw all these qualities in her.

Can you recall any trouble in the course of your marriage?

Lady Ngozi: Like everything else, there’s a sweet part and a bitter part of marriage. But in all, love should always prevail.

That bitter part is what I’m talking about. Has there been any day you got so angry that you could not hold yourself?

Lady Ngozi: Because of the love I have for him, if he offends me I would pour out my annoyance. I don’t hide my feelings. And, he would apologise and that ends it.

How about you, sir?

Sir Alphonsus: My Bishop said that the absence of quarrels in a home does not necessarily make it a Christian home but the ability of the couple to reconcile quickly. In marriage, we become one but we still see things differently. The day I really got angry was the day she insisted I take home our house help.

Then we were living in Lagos. I was trying to let her know that even though the house help was not the best, the problem we would have if she went back would be more than what we were passing through then. She could not reason with me that way. She refused, so I sent the girl back to the East. It really angered me and she herself confessed later.

What will be your advice for intending couples?

Sir Alphonsus: Your interest should not be on the money but on character.  Present-day marriages are based on what the man has or what one is going to get. Character is no longer part of it. Some of our young girls have forgotten that some of these men who have money have no character. He sees you as part of the furniture he bought. Girls of now a days do not consider character any longer.

And, you, Madam, what advice do you have for spinsters out there?

Lady Ngozi: First of all, they should hold tenaciously to Christ. Let Him be the foundation of their marriage. If they have Christ every other thing will follow. This is because Christ is love And, love covers everything; you can’t hurt who you love.

They should learn always to say ‘I’m sorry when they are in the wrong. Don’t harbour things in mind for your partner. Always forgive and forget and always pray. There would be trials. But when you pray they would pass away and you will enjoy your marriage.