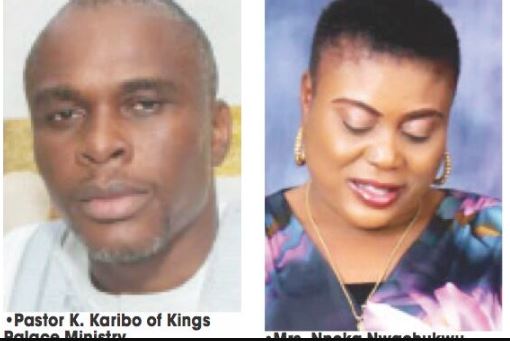 This Tweet Of A Mum Who Took Her 5-Year-Old Son On A Spa Date Has Drawn Divergent Opinions Online | What Do You Think?

Families and friends were enveloped with joy after the news of 50-year-old Mrs Nneka Nwachukwu who miraculously gave birth to a bouncing baby, broke.

According to reports gathered by SunNews, the woman had been married for over 13 years without the fruit of the womb. It was gathered that she and her husband are members of Kings Palace Ministry church based in Gudu district, Abuja.

The members of the church were also enveloped with joy when the news broke that their member had been delivered of a baby boy.

Mrs Nwachukwu and her husband, Mr Richard Nwachukwu were full of praises to God for opening the door for the barren Nneka.

The couple were said to had been battling and praying expectantly for a baby in those 13 years until now. It was also gathered that the couple are deacons in the church and that their pastor, K. Karibo had prayed and prophesied to them of bearing a baby.

According to the woman, the pastor had prophetically prayed for her before she got pregnant after 13 years of expectancy.

“We thank God for this blessing. God is still blessing people with babies.”

Also Mr Nwachukwu in an interview said that he works with the Code of Conduct Tribunal, and had been married to his wife since 2009.

READ ALSO: Inspirational: 58-Year-Old Dorcas Osiebo Who Got Married Since 1984 Is A Mum For The First Time Ever And Her Journey To Motherhood Is Nothing Short Of A Miracle

He said that while believing God for a child, it was discovered at the hospital that her wife was having fibroid.

That was in 2010, he said, adding that they visited a specialist doctor at his private hospital in Apo, Abuja though the doctor also works at the General Hospital as he was identified as one of the best in the area.

“After the operation, unfortunately, she would take in and would later have miscarriage. This continued and we approached the Pastor of Kings Palace Ministry, who incidentally, is our pastor.

After prophetically praying for us, he advised us not to trust the English medicine in this particular case, but to wait for God’s miracle.

Truly, we followed his instruction since 2013 and lo and behold as we continued trusting and believing in what the pastor told us, last year, she became pregnant and she had been visiting our family doctor, Ruth who saw her through antenatal before she delivered at Almac hospital, Lugne, Abuja of a bouncing baby boy,”

ALSO READ: From Ridicule to Miracle: Folashade Adesalu Shares Her Story of Fruitfulness Despite Medical Diagnosis

While expressing his appreciation, Mr Nwachukwu thanked God and urged those passing through such situations to believe in God, adding that often times the situation may overwhelm them, but they should never take off their belief from God.