SP Benjamin Hundeyin, Police Public Relations Officer, has shared some safety tips for Nigerians who use a swimming pool.

The police Officer, gave the tips after three siblings reportedly drowned at a swimming pool in an estate in Ajah area of Lagos State.

Daily Post reports that the parents of the deceased had left for an event, leaving the kids – age 14, 7 and 3 at home. They, however, went to the estate pool to swim but drowned in the process.

Their lifeless bodies were later discovered by residents and security personnel, who rushed them to a hospital, where they were confirmed dead. Upon their arrival, it was gathered that the couple fainted but were revived after some minutes.

Reacting to the sad news, the police officer took to his social media platform to dish out the following safety tips:

“Just a piece of advice, do not use a swimming pool without an on-duty life guard.

Do not swim at beaches without capable hands around. People are losing loved ones to avoidable drowning. Three siblings recently drowned together. Eldest was a teenager. Be careful out there.” 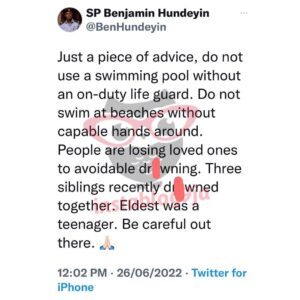 A relative of the family of the deceased, who simply gave his name as Manuel, further clarified that the parents of the children were not at home when tragedy struck.

“They alerted other residents. By the time they jumped into the pool, they discovered there were three children. Unfortunately, they were confirmed dead by the time they were rushed to the hospital.

Policemen at Ajah division were informed of the incident. Parents of the children are yet to come to terms with the tragedy. It is more devastating because they were all their parents had.

If fact, when they were contacted on the phone on the day of the incident, they rushed back home. The first thing the woman requested was their children. They passed out when they were told what happened. Their mother had not ceased crying since the incident happened.”

The spokesman for the Lagos State Police Command confirmed that the incident happened but declined to reveal the identities of the children. He said,

“The incident occurred on the evening of June 12, 2022. No arrest was made because there was a sign of no lifeguard on duty at the pool. I won’t reveal the identities of the children because the parents are devastated already.”