After Years Of Searching For A Life Partner, Here’s How Olympian Lolo Jones, 40, Is Taking Control Of Her Fertility Journey

A coalition of aviation workers’ unions have threatened to proceed with industrial action in the next 14 days if their demands are not met.

The unions threatened that if their requests for withdrawal of the bills are not granted, they will proceed with industrial action in the next 14 days.

The union called the bill a subtle attempt to restrain the powers of unions and obliterate unionism in the aviation sector.

“All services which facilitate and maintain the smooth, orderly and safe take-off, flight and landing of aircraft, embarkation and disembarkation and evacuation of passengers and cargo respectively in all aerodromes in Nigeria are hereby designated as essential services pursuant to the provisions of Section 11(1) of the Constitution of the Federal Republic of Nigeria, 1999 (as altered).

“The minister may, by regulations, prohibit all or such class or classes of workers, officers and other employees or persons, whether corporate or natural, engaged in the provision of services specified in subsection (1) of this section from taking part in a strike or other industrial action.

Secretary-General of NUATE, Ocheme Aba, said the implication of the clauses is that the bills grant powers to the minister of aviation to regulate trade unions and workers, in contradiction to the Trade Unions Act, 2004, which grants the minister of labour sole regulatory powers over trade union and industrial relations matters in Nigeria.

“It is absolutely clear that the contentious clauses smuggled into the aviation agencies’ bills have no moral or legal basis for being there. The lame reference to Section 11(1) of the Constitution of the Federal Republic of Nigeria (Public Order and Public Security) is poignantly pretentious.

“Its attempt to enable the minister of aviation to usurp the powers of the minister of labour is diabolically disingenuous. And its bold assault on the rights of trade unions and hapless workers renders the intended law a demonstration of an ultimate disservice by public officers. Therefore, the intended laws must be prevented from breathing any air of acceptance.”

The coalition demanded that the leadership of the Senate and House Committees on Aviation withdraw the bills and expunge the contentious clauses before approval by Mr President.

The unions requested that persons behind the clauses must be exposed and punished, adding that obnoxious clauses are in conflict with prevailing national and international laws (as ratified by Nigeria) and have no place in the aviation sector.

During the protest today, Ben Nnabue, President of the National Union of Air Transport Employees (NUATE) told newsmen that the protest is simultaneously taking place in all the airports in the federation.

Nnabue who revealed that they are demanding the removal of a clause in an act establishing aviation agencies that seeks to prevent trade unions from protesting, gave the federal government a 14-day ultimatum for them to look into their demands, or see them embark on a full-blown strike that might possibly shutdown airport activities.

“Sometime last year, we went to the national assembly to amend the act establishing the agencies, so that it would be more progressive. There was one obnoxious clause that talked about trade unions not going on strike.

“We were shocked that before they sent it to the president for assent, those clauses were maliciously inserted. So we have to fight for them to remove it. That’s the whole idea.

“It is a peaceful demonstration. It is after now and they didn’t hear us or didn’t look at our demands, then we get to the level of grounding the operations of airports,” he said.

“We have given government 14-days ultimatum to look at our demands, after which we now do what is called strike.” 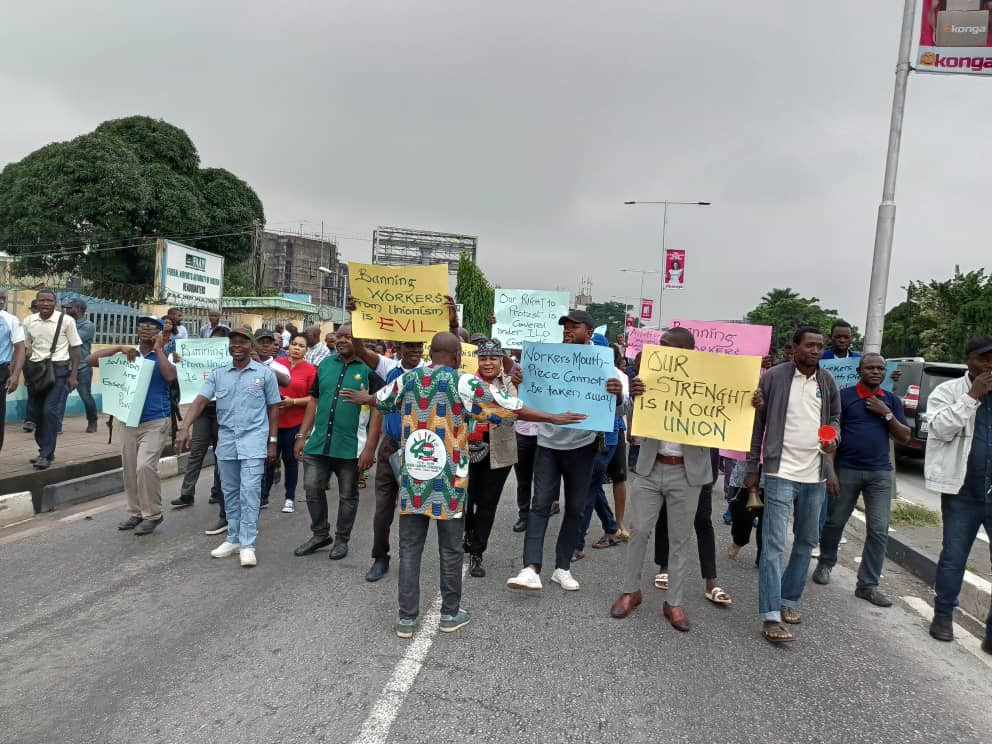 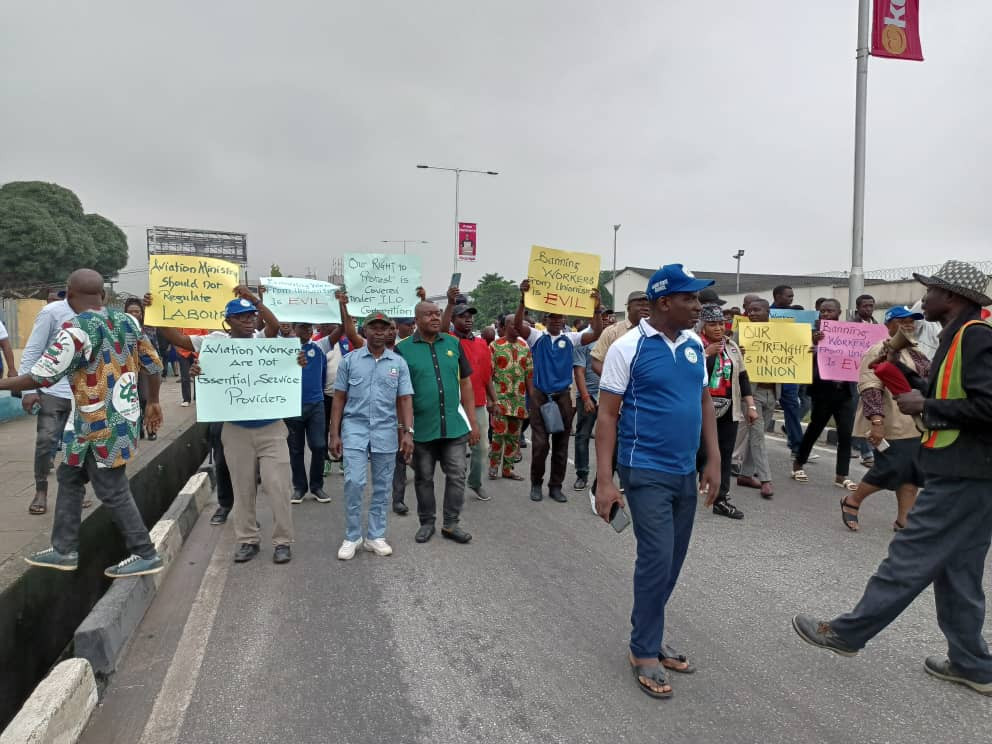 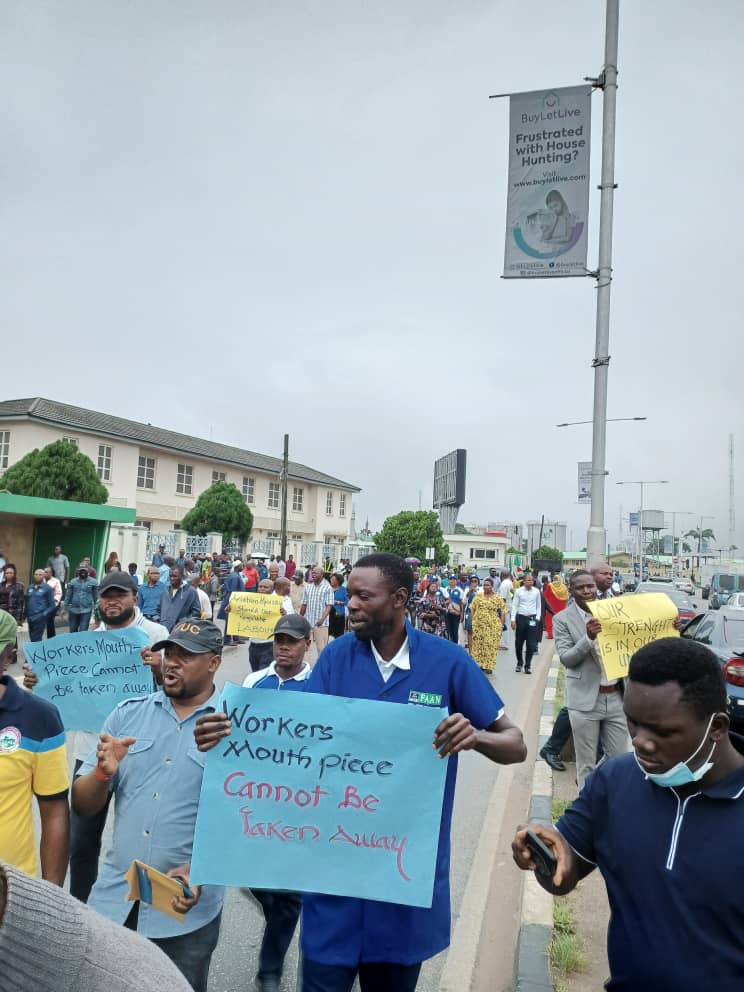