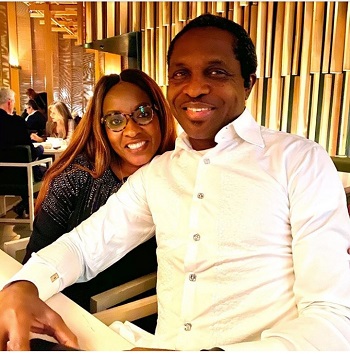 Why You Should Never Marry A Man Whose Mum Or Sisters Do Not Love You | Clergyman, Soul E Addresses Single Women

Billionaire oil tycoon, Tonye Patrick Cole has hailed his wife, Sylvia Cole as he goes on to advise Nigerians not to be jealous of her when they see her enjoying the fruit of her labor.

In a Twitter thread, the Governorship candidate of the All Progressives Congress in Rivers State and businessman narrates how his wife became his pillar and stood by him when he was still coming up as a man.

According to the politician and dad-of-three, his business is successful today because of the sacrifices she made many years ago.

He posted a throwback photo of him and his wife while he remembered when he wanted to start his company, Sahara Group.

The billionaire businessman said while he built the company, his wife took charge of the home front and catered for the family for two years, that is, she put food on the table and paid the rent with her salary throughout the years.

Cole revealed that he and his wife made a tough decision to put everything he had into setting up the company, and for the first two years or more, he didn’t earn a salary, and all the money they made went back into the company.

He disclosed that his wife was a registrar at the University of Lagos then, and they had a toddler to cater for too. Cole said it turned out tough for them, but his wife proved herself to be more challenging.

Cole concluded that people should not be jealous when they see his wife enjoying the fruit of her labor because she worked for it and made sacrifices for it.

“Starting Sahara many years ago, my wife and I made a tough decision to put everything I had at the time into setting up the company. For the first 2 years or more, I didn’t earn a salary, and all the money we managed to make went back into the company.

My wife, @sylvie6000 was a registrar at the University of Lagos in LUTH at the time. I remember we had a toddler, my son, to cater for, and I had to be in Port-Harcourt for long periods during those 2 years.

Those were some tough years, but my wife proved herself to be tougher. Sahara is successful today because of the sacrifice she made back then. She supported me so much that she held the home, put food on the table, paid our rent, all with her salary for more than 2 years.

Today, if you see her enjoying the fruit of her labour, please don’t be jealous, she actually worked for it, and paid a price for it; the price of standing by me, believing in me when I needed her the most. Till this moment, she still stands by me, supporting me all the way, especially since I made the decision to climb this political mountain.

To my amazing and outstanding wife, Sylvia Cole, medical doctor extraordinaire, wife of a special class, beauty with brains, exceptional woman! This is a small note to say, THANK YOU! I love you.” 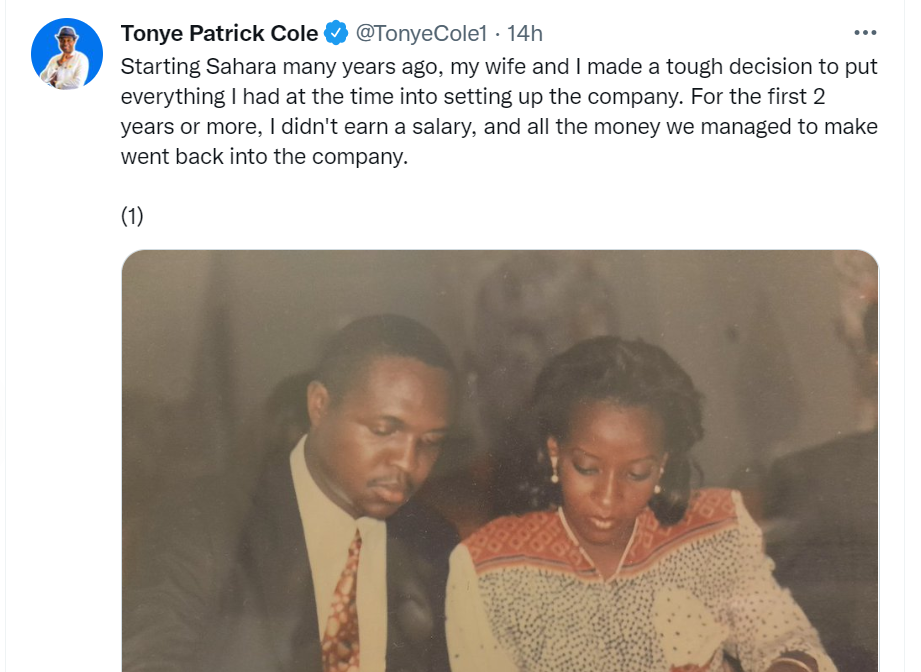