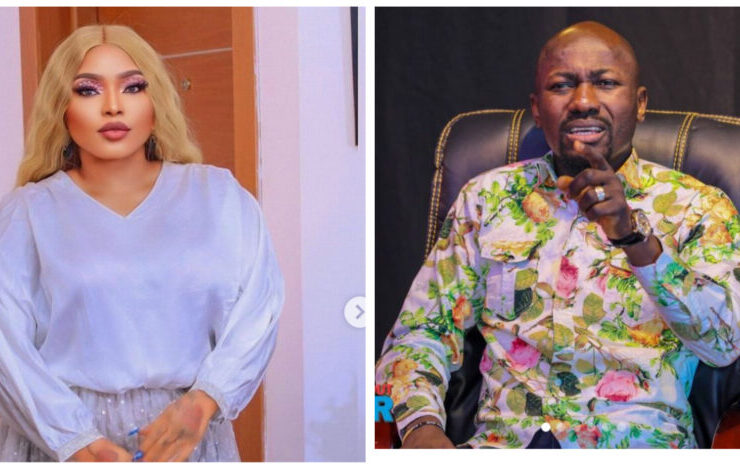 The actress who has been left bedridden following her altercation with the clergyman has been dragging the controversial clergyman for allegedly tormenting her.

Since her return to Instagram after weeks of absence, Halima dragged the married Apostle as she threatened to disclose more secrets on social media if anyone tried to bully her.

Disclosing how she met the highly revered minister of God, Halima claimed she met him as a separated businessman with three kids. She further revealed that their sexual relationship was 11 years ago.

To prove the doubting Thomas wrong, Halima shared more screenshots to back up her claims.

Following the bombshell, the actress has been bedridden. Her family hinted at the sickness being from the clergyman as they vowed to hold him responsible if anything happened to her. They wrote:

“Johnson Suleman imodu. If anything happen to our sister, you going down.”

Still on the subject, Halima’s manager who has been handling her Instagram page since she fell sick dropped more details on their relationship.

Halima’s party has continued to spill different details from her deadly affair with the controversial clergyman.

Pledging her undying support for Halima, she disclosed that the Apostle engaged the actress as he gave her ring.

“I am not my sister. I am her manager, so let’s be guided pls. At least being human is still a thing. I will stand with her. I will fight for her. We are united for her. We will see you in court Johnson Imodu. You gave my sister ring for God’s sake.”

In a shocking twist of events, Halima’s manager who is now handling her social media page has accused the clergyman of owing the actress two kids.

Her manager claimed that the Apostle left Halima in a pool of blood and made her wait for him for 4 years. She questioned what the Apostle wanted to use the actress for and why he was heartless towards her.

“Suleman you owe Halima 2 kids, you owe her a mountain of blood…I wonder why, you choose to be heartless, you made this lady wait for 4years plus knowing she was bleeding and not a word from you… What do you want to do with her? Is it not enough? You are wicked”.

Not a single word. Noooo you must stop. You called her your. No one introduced her to you. Sule you called her yourself. You chased her…you force introduction to my family. 2009 till date. Sule you playing with fire…rivers state university, run when you see this man call Johnson.

Do you know what 4 years to 5years is? No you don’t…you kept her at home like one doll, without friends, you bad mouthed everyone to her…you know how long? My sister tried for you.. No one deserve this. We repeat, it is you we know!! Let me just say it…since to see you na ticket…..”

ALSO SEE: ‘If Anything Happens To Our Daughter…’ -Halima Abubakar’s Family Calls Out Apostle Johnson Suleman As Actress Gets Bedridden 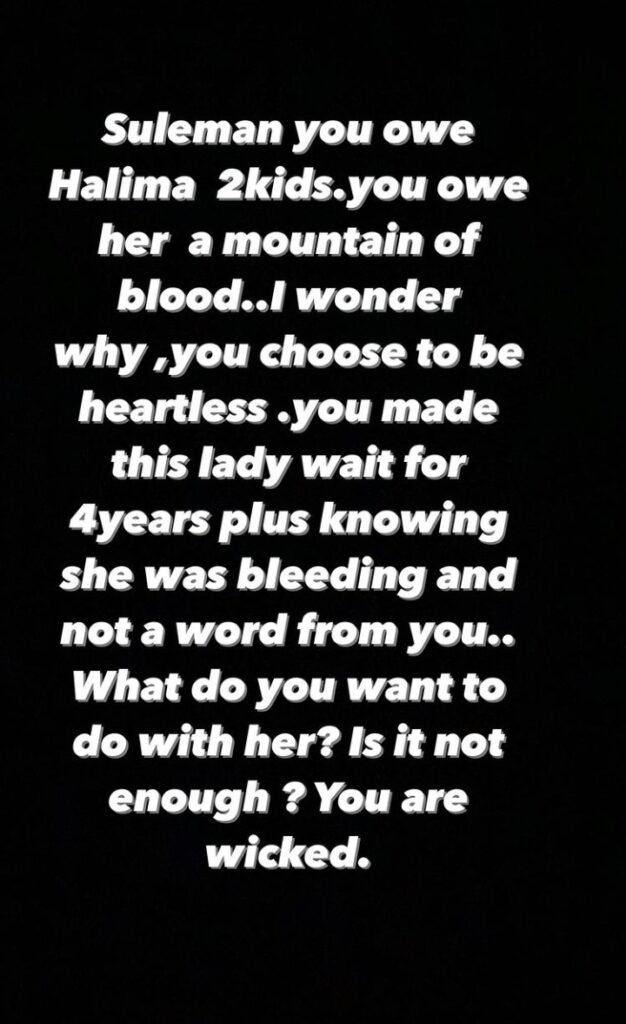 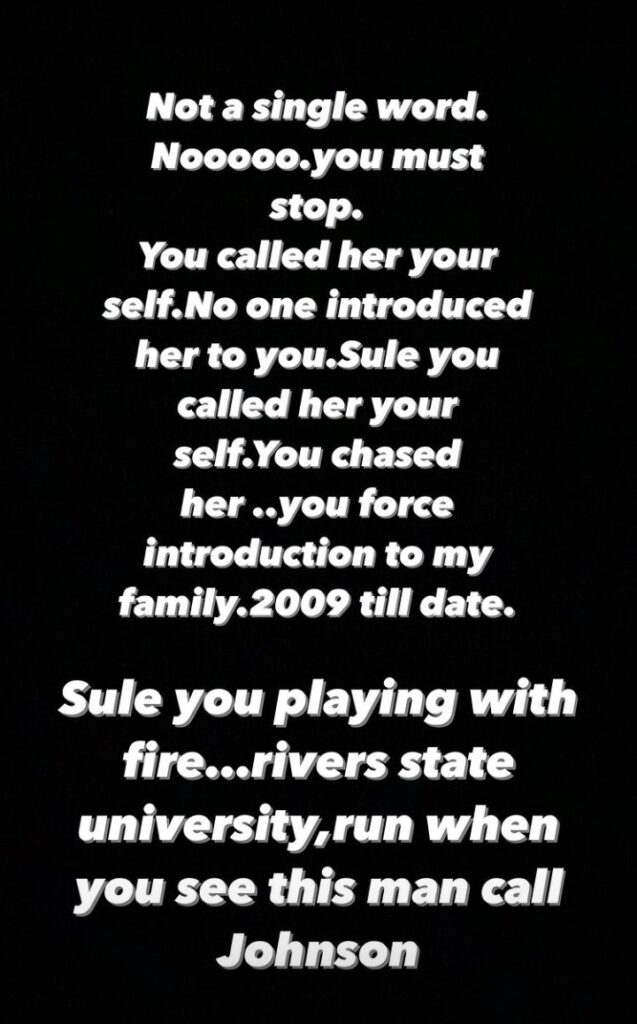 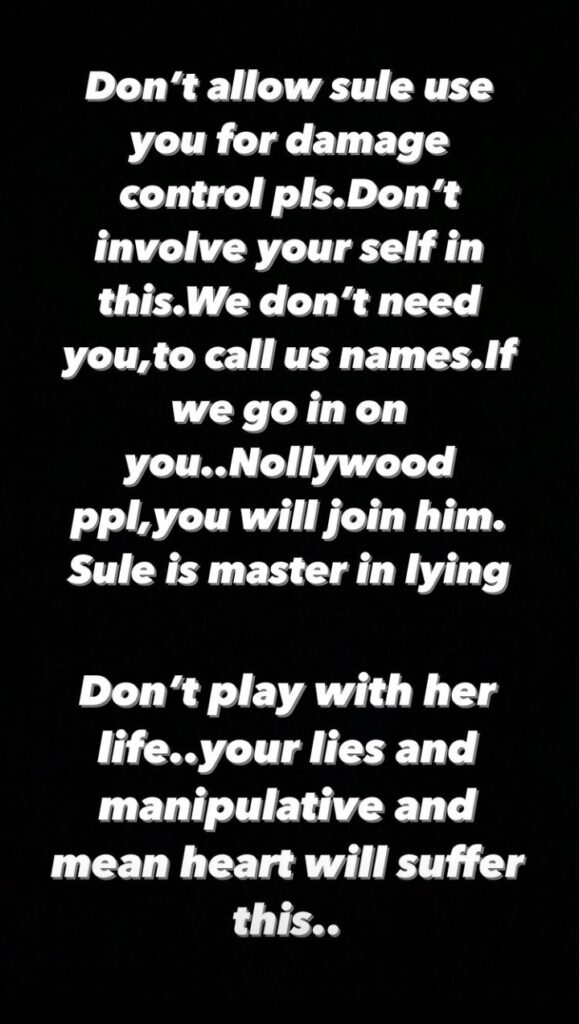 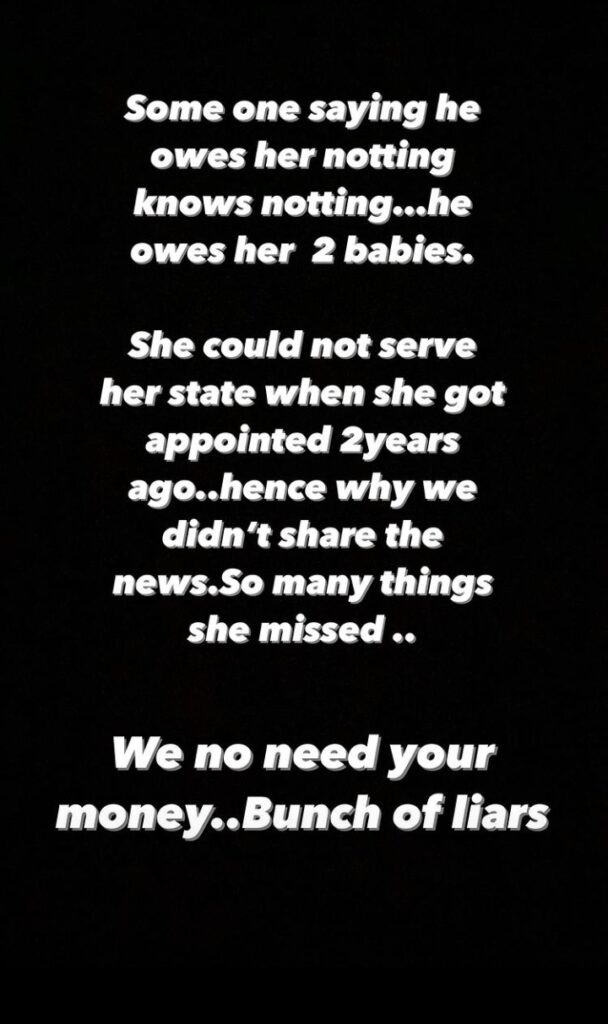 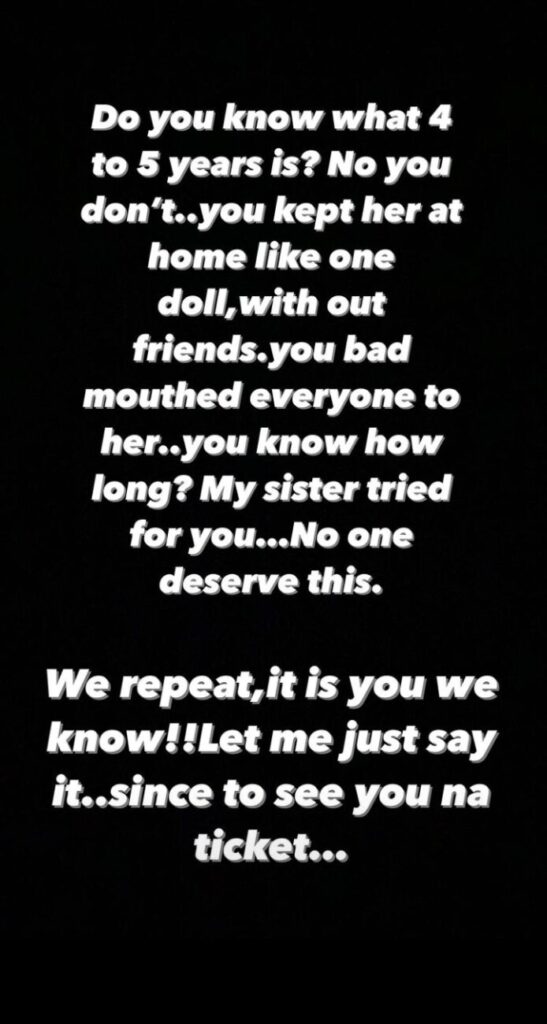 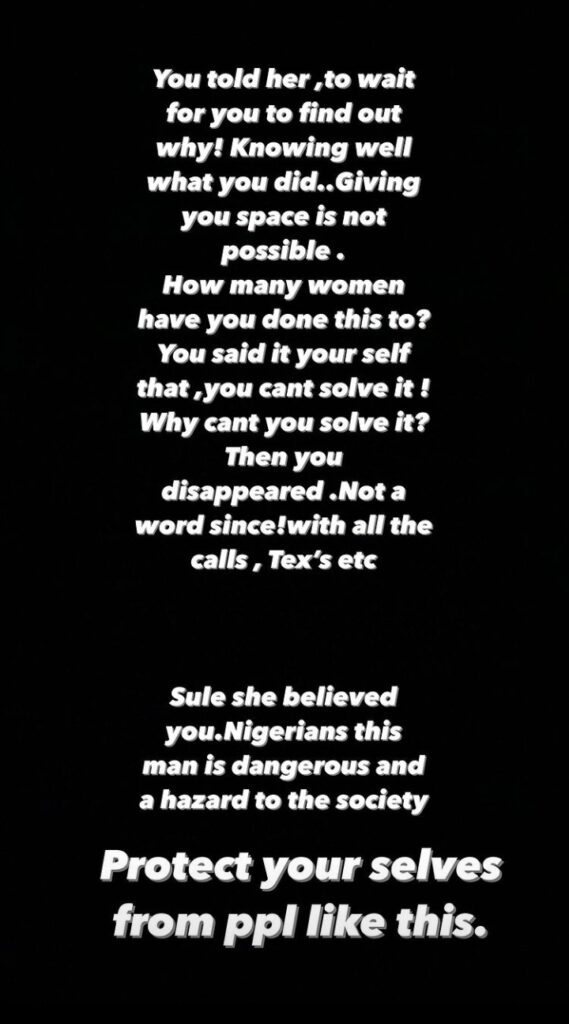 The drama between Apostle Suleiman and Halima Abubakar started in June when a controversial blogger, Gist Lover, disclosed that the actress was in a relationship with the man of God, who is allegedly fetish.

A few hours after the reports emerged online, Halima confirmed the story via her Instagram story and claimed there would be a disaster if she decided to speak regarding the issue.

Surprisingly, none of her colleagues have showed support for her in her fight with the pastor. Following her ailing health, actress, Iheme Nancy took to Instagram to show support for her.

She called for help and prayer for the actress as she noted how the pastor has always been in the midst of scandals.

“She has been saying the truth since, no body is perfect we all know that, but my question? Why is it same person in the midst of sexual scandal all the time, why can’t we stop being gullible followers?

The allegations on this same pastor is too much, ARE you the only Pastor??? Please let’s help save Halima Abubakar, don’t come for me because I will give it to you back…..if anything happens to her by chance her pictures will start flying up and down…(friends and colleagues) don’t he afraid, because I am with you, do not be dismayed, for I am your God.

I will strengthen you and help you…I will uphold you with my righteous hand… (Isaiah 41:10)… Pray for Halima.” 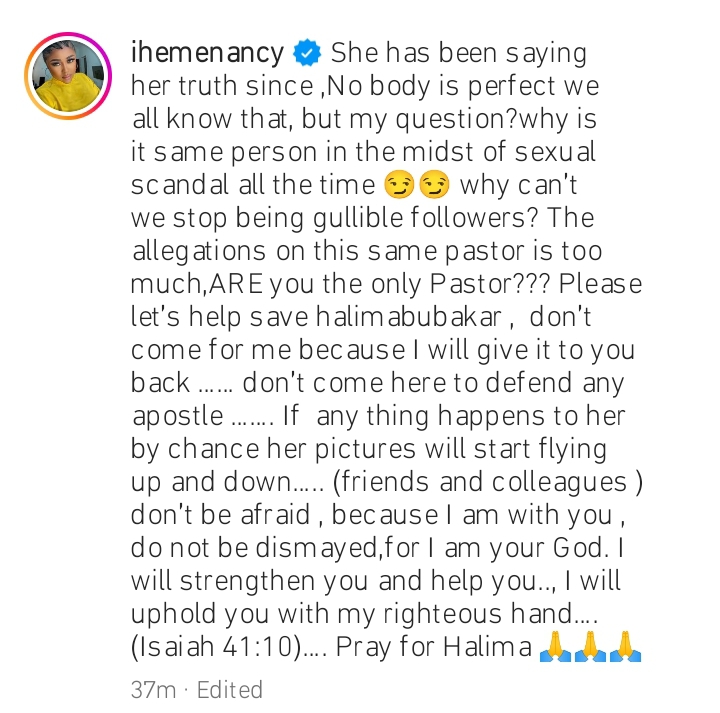