A Nigerian man has revealed on social media that he terribly regrets marrying his wife.

The married man stated this in response to a question Twitter personality, John Doe asked married. John had earlier taken to the microblogging platform to pose a thought-provoking question at married couples.

John asked if they would like to marry their current partner in another lifetime and if their marriage is one of the best decisions of their life.

“Married people. Is your own marriage one of the best decisions you made in your life? If you come back to this world, will you love to be married again? And to the same partner? Please be kind to respond honestly,”

The question sparked a deep conversation online as many couples reflect on their marriages and share their unique experiences.

While some said they have great marriages and will chose their partners over and over again, others said they regret marrying their spouses and wish they never met them.

READ ALSO: A Year After Separation From Ex-Husband, Actress Xandy Kamel Laments Her Regrets Marrying A Man Who Was Not Financially Stable

Reacting in the negative, a young man identified as Khadiri, said he regrets marrying his wife, and gave a list of reasons.

According to Khadiri, after tying the knot with his wife, he discovered that everything about her was a lie adding that he wouldn’t wish to marry her again in another lifetime.

ALSO READ: Distraught Nigerian Woman Calls Out Her Newly-wedded Husband For Deceiving Her Into marrying Him 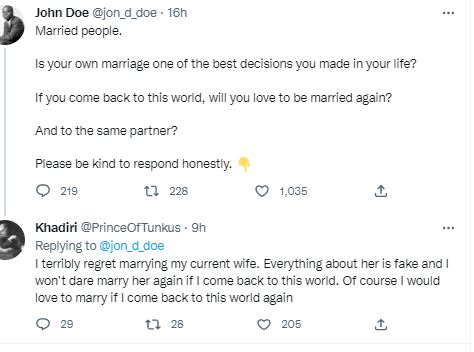