A couple is trending on Facebook after they held their wedding over the weekend and didn’t have a reception afterwards. The couple, whose names were simply given as Augustus and Vivian, got married in St. Dennis Catholic Church in Bariga on Saturday, February 8.

After exchanging their vows in the church, the couple distributed a package to everyone after Mass and they cut their cake at the exit door of the church and everyone took a piece and went home.

READ ALSO: Couple, Rebecca And Glen Maxwell Get Married In T-shirts, Jeans, And Trainers To Prove This Point

There were no friends wearing Asoebi, there were no bridesmaids or men in suit, it was just the couple in their wedding outfits and their guests wearing whatever they wanted.  After Mass, everyone went home before 1pm. “Today’s wedding between Augustus and Vivian in St Denis Catholic Church Bariga was particularly different in a very cool and sweet way.

The bride and groom were beautifully dressed. A friend of mine Edith Kush did the make up for the bride. The wedding was done with the bride and the groom exchanging their vows to each other lovingly. That was the highpoint of the whole thing.

“The food and souvenir were beautifully packaged together and were distributed to all that came just immediately after the mass. They had the cutting of the cake just at the exit door of the church. No reception. No hall. No Mc. No DJ. No event planner.

No aseobi. No bridal train. Just the essential. Before 1pm everyone was already on their way home and to their other businesses, including the couple. On Sunday they will come for thanksgiving after having consummated the marriage without stress.” 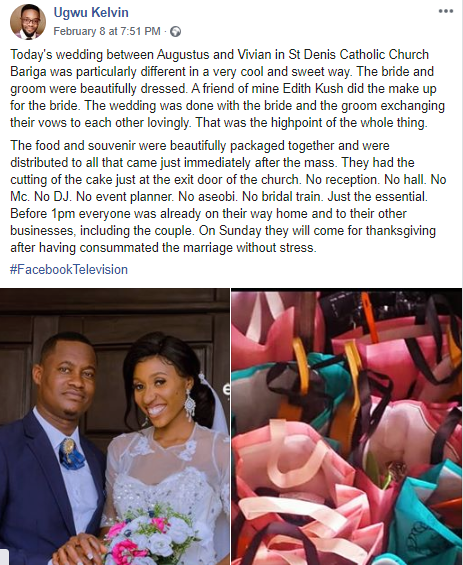 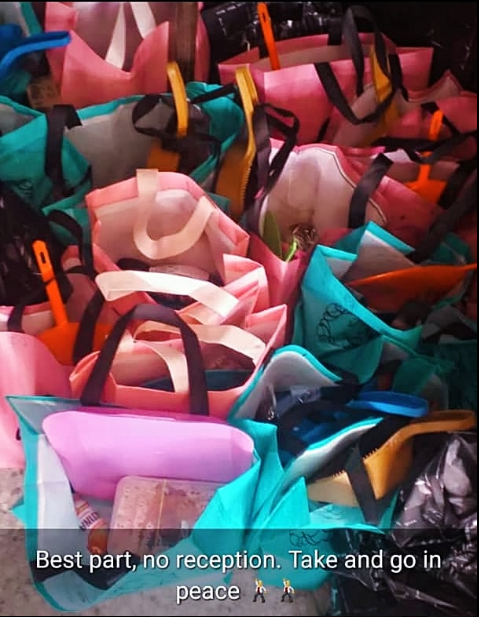