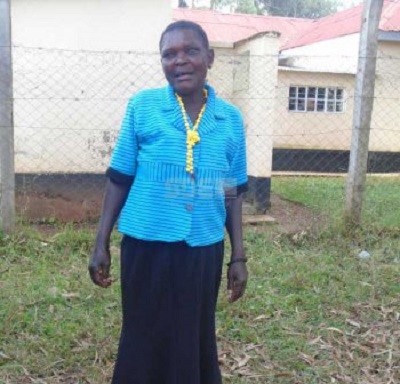 Check This Out: Man Pictured Carrying Child On His Back While Riding ‘Okada’

A rather shameful incident has occurred in which two family members from Kakamega in Zimbabwe are fighting over who should inherit their late brother’s wife, pictured above.

CityNews reports that Alfred Mukhobi, the husband to the woman they are fighting over, died in 2010 after a brief illness, leaving behind Rose Abwona, 45, a mother of nine.

After the death of Mukhobi, his cousin, Alexander Alusa, went ahead to inherit his wife, Rose and has been taking care of her and providing for her kids

However, things are not looking well for Mukhobi’s cousin after inheriting Rose as he has now incurred the wrath of Mukhobi’s brother, Henry Mukhobi who is threatening fire and accusing him of being selfish and greedy.

It is alleged that on several occasions, he (Henry) attacked Alusa, leaving him with serious injuries.

Narrating why the two are fighting, Henry said that Alusa’s decision to inherit his late brother’s wife was wrong and could anger Mukhobi’s spirits. He claimed he was the rightful person to inherit her because he was the deceased’s brother.

Henry said: “If my late brother learns that he inherited his wife, trust me, he will be very angry. This man Alusa even moved into my brother’s house, which is disrespectful! What nonsense is that?”

However, Alusa has refused to leave Rose claiming that she is in love with him.

“I was to build Rose a new house, but the community didn’t allow it. She appreciates the fact that I have been paying her kids’ school fees and providing for her since her husband died,” the 69-year-old father of one child who lost his wife in 1998, said.

He added: “I work at a hotel in Kakamega town as a plumber and living in Khayega is more convenient since I can get to town early enough, compared to when I used to live in Chirobani. I removed one iron sheet from  my late cousin’s house and replaced it with a brand new one as tradition dictates. I also shifted the bed position to signify a new beginning.”

Rose also added that she loves Alusa and has no plans of leaving him since he had even paid her dowry.

“I love him. He gave my parents Sh20,000 and one cow that my late husband hadn’t finished paying,” she said.

She accused Henry of being abusive and disrespectful some years back after she refused his advances.

“He is abusive, yet he wants my hand in marriage. He abused me when he was working as a government officer in 2014.  He had threatened to kick me out of my homestead after I refused his advances,” she said.

Mumias ACK Bishop Beneah Salalah, noted that if the couple had opted for a church wedding, such drama could have been avoided.