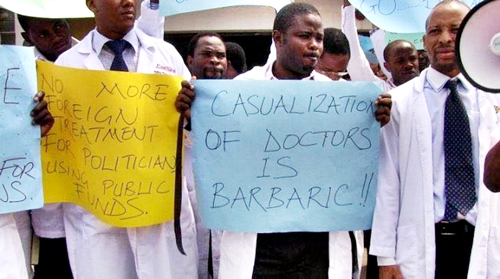 The National Association of Resident Doctors of Nigeria (NARD) has suspended the planned strike scheduled to begin this week after a meeting with the speaker of the house of representatives, Yakubu Dogara.

NARD reportedly suspended the strike after Dogara urged them to consider shifting the industrial action for one week to give room for their demands to be met, Pulse reports.

In his statement, he said:

“It doesn’t matter what faith you profess, for instance, it is clearly stated in the Holy Bible that a labourer should be paid his wages even before his sweat dries. I believe that as a responsible government we know this.

“It is not like we don’t know. But as to challenges facing you, these are not things that we had discussed before, I only heard through the briefings I was given.

“If it is possible for you to open this window for us in the immediate to call on relevant persons who are in charge of this, in conjunction, of course, with the active participation of your good selves, the relevant committees of the House, so we can sit at a table like this.

“I can sit down with the chairmen of committees, some members of the relevant committees, with your good selves and members of the ministry and they, can bring these issues so we’ll understand why someone will work for four to eight months and not be paid. What is the problem? And then, we will attempt to address these issues together and if it doesn’t work, we can’t stop you from venting your anger and expressing your grievances.

“I appeal to you to give us till next week when I hope we will be able to invite them and we will sit down together and iron out the issues,” he added.

The planned strike had been announced on June 8 by NARD president, Muhammad Askira.