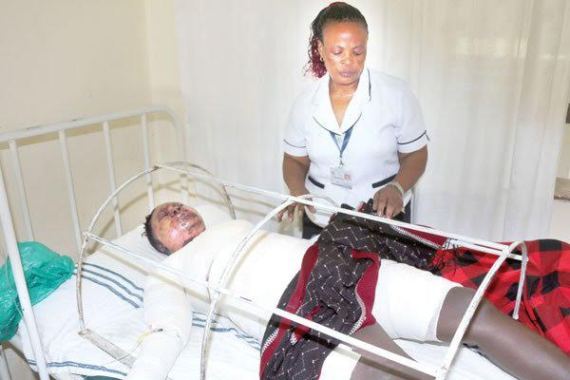 A 28-year-old pregnant woman, Cythia Njoki, from Kenya, has suffered burns up to 45 per cent of her body after she set herself ablaze over her husband’s alleged extra-marital affair.

Narrating what led to the quarrel on the fateful day, according to Tuko news , Cynthia said her husband failed to return home that night and when he returned on Sunday evening, he kept on calling a woman she suspected was having an affair with him.

Out of anger, she went into their bedroom, poured kerosene on her body and set herself on fire.

“I had an issue with my husband after he failed to report home and on coming, he continued to call a woman he was having a relationship with. I was angry and burnt myself,” said Njoki who was in deep pain at Rift Valley Provincial Hospital.

Jenipher Mathenge, the nursing officer in charge of the ward, said she was received on Sunday night at around 8 pm in a critical condition.

“The patient was received in a very critical condition, with her hands, face, abdomen and thighs burnt. Her fingers are also totally burnt,” Mathenge said.

She also claimed that the patient has breathing problems after she inhaled hot air. They are investigating the status of the unborn baby after they noticed the foetus had irregular heart beat.

“The patient is pregnant and we are conducting further investigations to know the status of the unborn child,” she said.

Mary Wangui, Cynthia’s mother said she rushed to the hospital immediately she was informed about the incident but could not communicate with her daughter because she had breathing difficulties.

Cynthia, who is 6 months pregnant sustained injuries in her hands, abdomen, thighs and face after she burnt herself using kerosene following a quarrel with her husband for refusing to explain where he spent the Saturday night, August 14,

Wangui said prior to the incident, her daughter had shared with her the problems she was going through due to her husband’s alleged promiscuity.

However, when she asked the husband what happened, he did not give a clear explanation, claiming to have received a phone call from a woman whom Cynthia suspected was his lover.

Watch the news below…