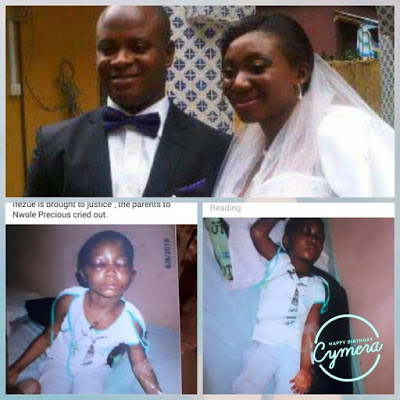 Dear MIM: How Can My Husband Allow Our Little Daughter Do This To Him?

A 6-year-old housemaid was allegedly brutally beaten by her madam in Abuja, before sending her back to her family in the eastern part of the country.

According to an embittered Facebook user, Rita Ifeoma Anyim, who shared the heartbreaking story and claimed the victim is her little cousin, she was brutalized by her guardian who called her a witch and then turned her into a punching bag.

She shared the above photo of the victim with the alleged guardian and wrote:

“Am still trying to understand this inhumane treatment that was meted out to my lil cousin (Miss Precious Nwole) by her supposed guardian (Mrs Chinelo Ifediora) who allegedly claimed the lil girl (she’s just 6 yrs old) was confirmed to be a witch.

She claimed that ever since the lil girl started living with them she and her husband started experiencing setbacks and that was the reason she almost snuffed life out of the lil girl.

She even had the guts to send the girl back to Awka with all the injuries on her body… CHINELO IFEDIORA must not go unpunished!”