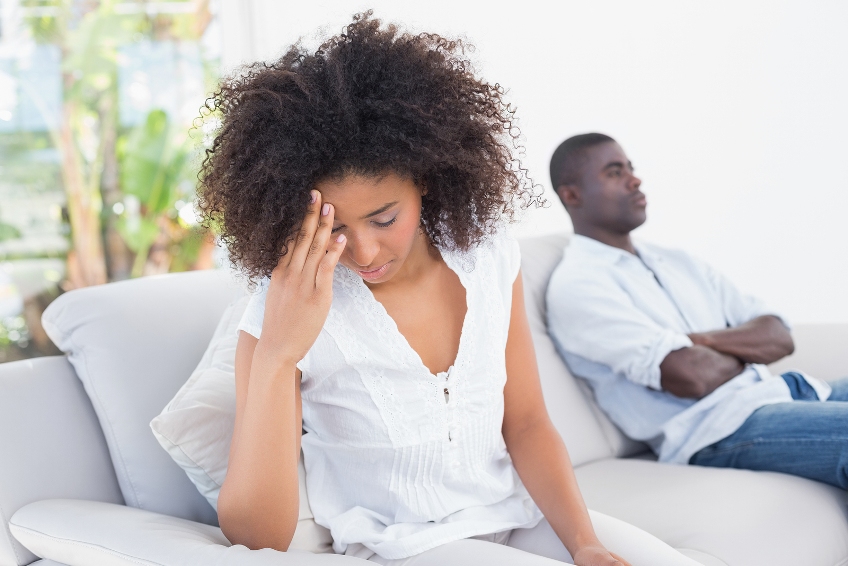 50 Kids Raped Within The Past Four Months In Plateau State

I was at the saloon recently and cringed as some women took turns revealing latest irritating/mean treatments meted out to them by their ‘darling’ husbands. United by their marital ordeals, they seemed to form an instant fellowship. ‘What can I do,’ a few of them who seemed to have resigned to their ‘fate’ echoed, as others who had no such ordeal or perhaps chose to conceal theirs, chastised them for putting up with such ‘nonsense,’ as they aptly put it.

From their sorry tales and several others staring us in the face on a disturbingly regular basis, here are common ways some Nigerian men treat their wives that are just wrong and will always get an absolute thumbs down…

1. Verbal abuse. Some Nigerian men are sure worse than the worst kinds of market women, you know, the kind that spitefully tell you to ‘come and take it without paying’ when you haggle too much, and subsequently go on to call you such unprintable names until you take to your heels.

Some Nigerian husbands nag about everything, never show appreciation, praise or compliment their wives, and take to constant name-calling, shouting and harsh criticisms until their poor wives’ self-esteem starts taking a nosedive or crashes.

Why not consider how the other person would feel and address issues in a civilized manner instead?

2. Physical abuse. It’s alarming how a lot of men have turned their wives into punching bags, just because they can and feel like it. Some of have ruined their wives’ self esteem, inflicted lifelong injuries/scars, and murdered their wives in the process of failing to exhibit some needed self-control. It’s just all shades of wrong, regardless of the excuses. Really, guilty parties need to stop and prove they are better than a group of untamed wild animals.

3. Turning their wives into subjects. Some wives are no different from a maid, thanks to their husband. They slave all day cooking and doing chores, caring for the kids, have no social life, can’t pursue personal/business interests and have become so miserable. They seem to have no rights. It’s like a tyranny or military sort of government – a dictatorship.

Their husbands entertain no complains and show no appreciation for their countless sacrifices, after all, as the man of the house, they work very hard and foot all the bills. ‘What woman wouldn’t give anything to have all the comfort I provide,’ they think. ‘My wife should be very grateful. She is lucky I don’t let her stress herself out there,’ they conclude. Seriously?

4. Financial starvation. Despite having more than enough, some Nigerian men only hand out stipends and could care less about how their wives foot the rest of the bills, despite their meagre income. Some would even draw lists for foodstuffs and other items to buy at the end of each month by themselves without any consultation, attach a meagre sum of money and hand over to their wives or buy and bring home by themselves.

In other cases, both parties are financially independent, so the husband decides to leave it all to the wife or let her foot a much larger fraction, after all, she earns even more.

5. Killing their wives’ dreams. Some men would never care to empower their wives, even if they have the means and their wives plead from now till eternity. Still, some will go all out to frustrate any bid by their wives to try to start a small venture on their own. They want their wives to depend on them solely so they can forever dominate them and play the boss in all areas. Too bad!

READ ALSO: 4 Ways You’re Probably Cheating On Your Spouse Without Realizing It

6. Never admitting guilt. A lot of married women are unfortunately used to apologizing to their husbands for no reason. Some men would never admit guilt and apologize even when it’s crystal clear they are the ones who erred. They always have a way of making their wives begin to think maybe they are the guilty party and decide to apologize for peace’s sake.

7. Ignoring special occasions. Whether it’s their wife’s birthday, their wedding anniversary or some other important occasion, some men act like they just don’t care by forgetting every year and refusing to do the needful when their attention is called to it.

8. Shutting their wives out of making crucial family decisions. As mentioned earlier, some men are dictators – period! They either always make their wives’ views look plain stupid in order to impose theirs or just don’t ask for their opinions at all. They just like to drop bombshells.

Lawmaker, Hon. Kennedy Ibeh Makes A Case For Unmarried Imo Women In Imo State. Do You Agree With Him?

9. Rejecting their wife’s food. Like a broken record, some men can go on forever pointing out to their wife how she’s such a bad cook, comparing her skills to their mother’s, some friends’ wife or ex-girlfriend’s, before shoving the food aside, stepping out of the dining room and storming out of the house. In some cases, the truth is, the food wasn’t really that bad.

10. Denying their wife sex. Some men have the habit of throwing their wives out of their matrimonial bedroom or moving their own personal effects to the guest room. Their wives would plead endlessly to no avail, often tormenting themselves with thought that their husband is likely getting it elsewhere, and, they are probably right.

11. Infidelity. What’s worse is that some men rub their shameful escapades in their wives’ faces without a care in the world. Some would even bring their mistresses to their matrimonial home – no need wasting money on a hotel room when they have such a cosy home, subjecting their wives to so much emotional trauma.

In other cases, some show no sign of remorse or care to apologize when cheating is uncovered. Others are open about their cheating and expect their wives to show some understanding, after all, ‘men are polygamous in nature.’

12. Rape. Some men also have their way with their wives by force on a regular basis. It doesn’t matter if she’s not up for it – they are treated like mere sexual objects only there to satisfy their appetite.

13. Letting in-laws lord over their wives. Some men would never defend their wives, even if their lives depended on it. They constantly observe and condone their family’s demeaning treatment of their wives, and countless times, their wives still have to apologize to in-laws after all the insults.

The list is endless, but gladly, we all have the uncanny ability to decipher right from wrong, don’t we? Here’s hoping men guilty of the above and the several others reflect and start retracing their steps.