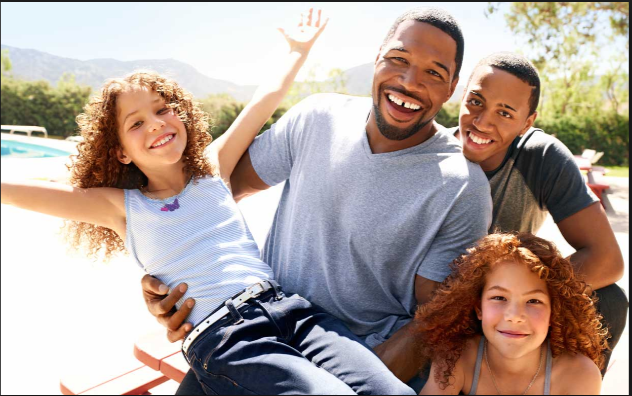 How Touching! Deaf Couple Hear Each Other For The First Time, Thanks to High-Tech Hearing Aids

American TV personality, Michael Strahan, is opening up about life as a parent and the differences between raising a son and 3 daughters. Strahan, who is dad to 12-year-old twin daughters Sophia and Isabella, son Michael Jr., 22, and daughter Tanita, 25, said:

“Girls are much more emotional. I’ll get in trouble for that, but boys are just easier. Boys are kinda like, oh, okay, yeah, very simple.

Where as I think girls are a little more emotional and want more explanation on things. It’s a little bit different between the follow up questions.”

In an interview with People, Strahan, who co-hosts the show Good Morning America, (GMA) explained some of the challenges he encounters in communicating with his kids. He said:

No dating until you’re 80 years old. It’s a totally different mentality. It just seems much more protective over the daughter than the son.”

Strahan, 45, a former National Football League (NFL) opens up about why he chose to keep working after retirement from NFL. The proud father revealed he wants to be a better and exemplary father to his four kids adding that:

“They’re the reason I wake up and work so hard. I’m not working hard to pay for things, I work hard to be an example. I retired from football when I was 36, and my twins were 3.

As they can grow up, I can talk to them about hard work and show them highlights from my football days or I can show them in the real world and they can see it now.

‘I Was Shocked Falling In Love With An Actress’ -Actor And Dad, Ibrahim Suleiman On Life, Marriage, Fatherhood And More

And my older kids as well. I try to be an example of hard work and where it gets you, and hopefully that inspires them.”

He further explains that despite all his work and success, he wants above all for his kids to be happy doing what drives and inspires them.He said:

“I think we put so much value on success and achievements and that’s all good and great, but life is not just meant to be about where you went to school or all these superficial things or what you have.

You are meant to be happy and to do something that inspires you and drives you. I hope all my kids find something that they wake up excited to do and with the mindset of  being the best. If I can get that, that’s the best.”