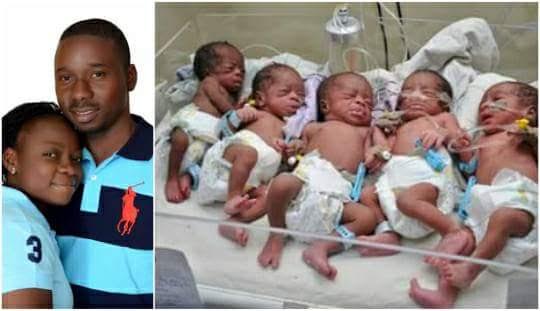 3 Signs of Low Milk Supply All Mothers Should Note

Imudia Mark Uduehi, and his wife, Oluwakemi Funmilayo Uduehi are the new parents of quintuplets who were welcomed at the National Hospital, Abuja, on April 12, 2017, have shared their birth story  and testimony.

In an exclusive interview with Sunday Tribune, the unemployed graduate from Edo State and his civil servant wife opened up about how they met, their shock and initial apprehension on finding out they were expecting five children, all girls, at once and the outpouring of goodwill from well-meaning Nigerians. 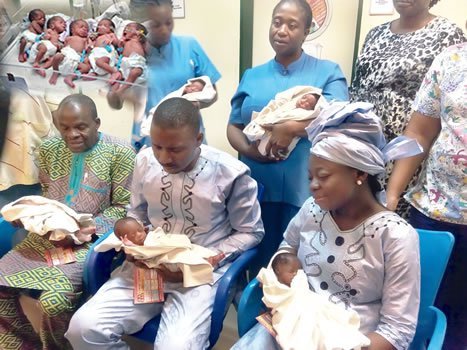 The journey into miracle

Having become friends during their undergraduate days at the University of Ilorin, Kwara State, going on to become graduates of the same department (Computer Science), both in 2009, while still remaining friends, Mr Uduehi, who noted that both remained friends even after graduation and youth service, decided to “change the pattern” and they eventually got married on December 5, 2015. However, in spite of having twins on both sides of their extended families, nothing could have prepared the couple for the scan test that first revealed that Oluwakemi was carrying quintuplets.

‘We thought the first scanning machine was faulty’

Uduehi stated that though “We haven’t had any children before now. We didn’t plan for five children. However, when my wife was pregnant and she went for a scan, we were told that she was pregnant with five children. I was a little apprehensive because of the number. We weren’t convinced about what the scan revealed and we even assumed the machine could have been faulty. So, we went to another facility to verify and we were told the same thing. So, we knew then that God was up to something in our family. There are twins on my father’s side, while on my wife’s mother and father’s side there are twins. My father-in-law is a twin.

While Mr Uduehi works with a Non-Governmental Organisation (NGO), which has no ongoing project at the moment, but focuses on maternal and child care, and has also done consultancy work with the Gates Foundation and had worked on projects dedicated to providing support for women and children, his wife works with the National Population Commission.

People have been coming to show support. Our pastor, Pastor Adewunmi Adeolu, of the Living Faith Church including the church has shown support. Pastor Adeolu has really been supportive and we are grateful to him. We are also grateful to the doctors for their professional assistance with the delivery. We have also been reached out to by members of the House of Representatives, specifically, Honourable Sargius Ogun, including others. Representatives of the Social Development Welfare Board were also here to show support for us and the babies,” he stated. 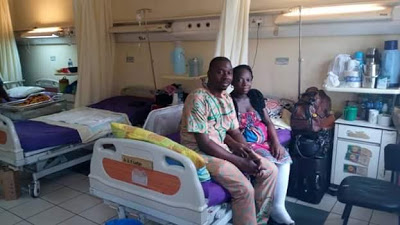 Uduehi stated that he and his wife didn’t have any premonition that she would conceive five babies at once.

“I actually wanted to start with one, while my wife wanted twins first. However, as God would have it, we have five at once. When it happened, we had words of spiritual encouragement from our pastors.

There was also one from Pastor E.A. Adeboye, where he declared that with the children, there would be no miscarriage or complications and that declaration really encouraged my wife. The truth is that everything about this pregnancy is a miracle because she carried the pregnancy for 34 weeks and three days and from day one, she didn’t have any complications. The only issue she had at 33 weeks was itching in the stomach. Apart from that, there was no issue at all till she had the babies. In fact, during her pregnancy, she was even helping women who also had babies. All I can say is that it has been God.”

On whether they would like to have more children

The question on whether we will have more children is very interesting. Having children, and of the same sex, is very rare. So, our having them at this time, we cannot but give God the glory. Being someone who has always advocated gender parity, one thing I know is that every child is important. I welcome them and I am very happy to have them. They are my children. Having witnessed what my wife went through during and after delivery – she was in the Intensive Care Unit for three days and she could not even talk during that time – she needs a break.

I would say we would stop. It’s not easy to care for children. Besides, if one attempt is bringing five, who knows what the next attempt would be? [laughs]. For now, we have no plans for more children. We have five children, and the focus now is how to care for them. When we consider the situation in the country, we would instead focus on giving their lives meaning. Having children is not just about having them. It’s about adding value to their lives. Our focus now would be all about ensuring we do what it takes to give them the best,” Uduehi said.

When asked if he could identify them, he said it was easier with the tags on them, noting that the children had been given fifteen names in all.

The Unusual Love Story Of This Couple, Jasmine And Macauley Will Definitely Warm Your Heart

Responding to the question on if there were medical interventions or challenges before the conception, the ecstatic father stated that “Before now, we didn’t have challenges having children. For me, everything about the pregnancy is divine.”

On whether they have any regrets

Is there any regrets having five children at a go? Uduehi who is not employed stated that “There are no regrets. The children have come to stay and we have the duty to ensure they are fine. I’m glad God brought them to the Uduehis. I have no regrets whatsoever. For myself, I would love to have something sustainable for the children.

I can work anywhere and if an offer comes up in which I’m confident I can function, I would gladly accept. I would be delighted to have a good job that will help me to care for the children. We are working on opening a dedicated account for the children which will be strictly for their welfare which can be tracked by donors.

Asked if he intended to reach out to anyone in particular for assistance, Mr Uduehi said: “I believe the news is all over the place and I believe our leaders must have heard about it. For those who God has really laid it in their hearts to be a blessing to the children, the door is open to them. We know that in the future, they will win medals for Nigeria. Corporate organisations, NGOs (local or international), government, and our leaders, we know God has put them there to be a blessing to us and we know they love children.”

Luckily for him, the Head of Service of the Federation, Winifred Oyo-Ita, promised to give a house to the couple. Oyo-Ita made the promise while visiting the children on Saturday in Abuja.

She said that the house will be given under the Federal Integrated Staff Housing (FISH) Scheme.

She also promised father of the babies a job with the Federal Civil Service. She described the children as great blessings given to the couple by God on a platter of gold. She said the job offer to Uduehi will enable him cater for the children.

In addition, she presented cash gifts and diapers to them, thanking the doctors for their efforts in ensuring the babies and mothers are alive.