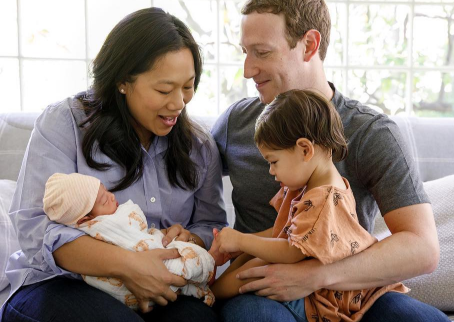 Are You Struggling to Shed Some Kilos? Check your Breathing | Expert Claims

A Nigerian man who goes by the name Amoo Joshua Oluwatimilehin exposed his patriarchal views to the whole world. He claimed there would be no one to inherit the Zuckerberg fortune if he keeps birthing daughters instead of sons.

Facebook CEO Mark Zuckerberg and his wife Priscilla Chan welcomed their second child, a girl on Monday. They took to their social media pages to share photos of their new born.
While the pair received congratulatory messages from all over the world, a Nigerian fan had something insane to say, which we guess is a result of the misogyny he has been exposed to in society.
READ ALSO: See Why Barack Obama & Facebook CEO, Mark Zuckerberg are Interested in This 14-Year-Old
What Oluwatimilehin said was in reference to the fact that the doting father has two girl and no son. 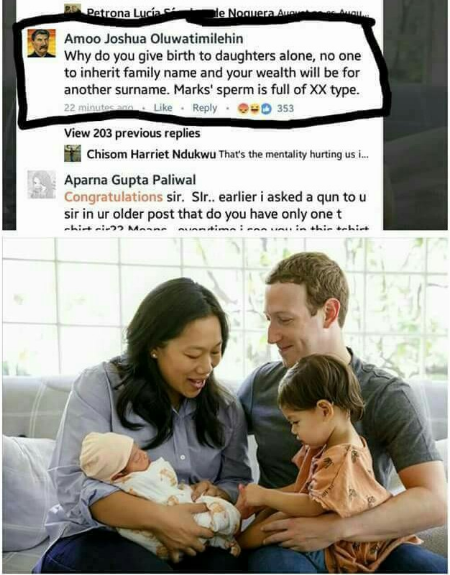 “Why do you give birth to daughters alone, no one to inherit family name and your wealth will be for another surname. Marks’ sperm is full of X” he said.

READ ALSO: Doting Parents Mark Zuckerberg & Priscilla Chan Pen Heartfelt Letter to Newborn Daughter
In the Nigerian society, from ancient time the boy child is said to be the father’s next of kin. A male son is still considered better than a girl child to some, it is only recently a lot of stereotype have been changing due to exposure.
The Laws just recently made it legal for female children to inherit property in Igbo land. More can be done to correct such inequality in society.
READ ALSO: Proud Dad! Mark Zuckerberg Is So Happy To Be A Daddy That He Just Had To Do This
However, it was not proper for that man to make denigrating comments about the sex of  Mark’s kids or even bother about things that are not his business.
What do you think? Share your thoughts on this.
Photo credit: Facebook
40
SHARES
Share on FacebookTweet thisEmail to friends
Tags
Inheritance Mark Zuckerberg
4 Comments
Amaka Adigwe August 30, 2017
Recent Posts