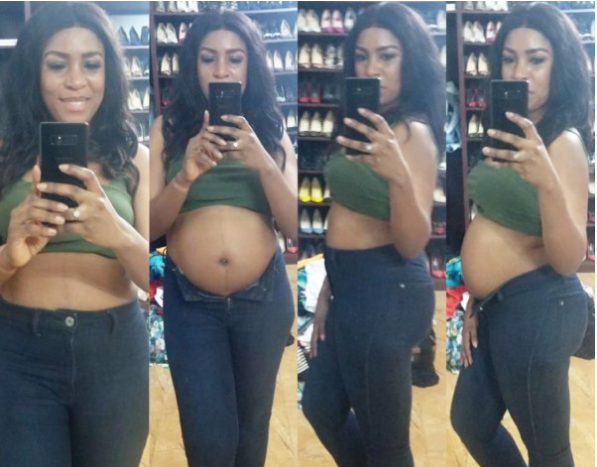 It’s been a topic of discussion since she announced her pregnancy, people talking about how she was an advocate for celibacy until marriage, and how she’s having a child while still single.

Also, controversial blogger, Kemi Olunloyo, said her pregnancy is not real and that the one she’s flaunting is a prosthetic baby bump she wore.

Olunloyo further said that Ikeji doesn’t have a womb, adding that the blogger loves children and can easily buy her way into having one.

READ ALSO: “I can’t wait to be a mum” – Linda Ikeji Gushes Over Sister, Laura’s Baby

Addressing these comments, the expecting mom, 36, shared bare photos of her baby bump to shut her detractors, asking if it was possible to pull that off in Nigeria.

”(How to hide a baby bump 101. Suck belle in and wear a high waist…lol). So, a few friends have been calling me, asking me how I’m holding up with all the trolling on the internet since I announced my pregnancy.

I kind of felt bad for them because they were worrying over something I wasn’t. I’ve been on the internet for nearly 12 years now, I’ve made money, I’ve met amazing people, I’ve written about folks and stepped on toes (mostly of course, unknowingly…lol). So when people troll me, that’s fine. It’s called Karma. Lol.

Fortunately it doesn’t get to me. There’s nothing I haven’t been called on the internet, and it will never stop because this is where I plan to do business for the rest of my life! So we all are stuck together. I’m not going anywhere…lol.

So let’s address some issues…and the reason why I bother is for the young girls who look up to me. I owe you and will always speak to help you in anyway I can because I want you to shine and be the better version of yourself.

So number one, let’s talk about this celibacy issue. I preached it a lot of times but I have NEVER said do not have sex before marriage.

READ ALSO: “Linda Ikeji’s predicaments were the reason why I got married.” Unpopular Blogger Explains Why She Rushed Into Marriage

Here’s what I have always said to young girls and I maintain it.

Never ever give your body to a man for money. You’re worth so much more than that. You’re beautiful beyond measure and there’s absolutely nothing a man can give you that you can’t give urself if you apply yourself, believe in yourself and work hard.

Start now that you’re young, pursue your dreams, work hard till your hands are sore and ur mind is tired, never listen to anyone who tells you you’re not good enough or you’re wasting your time, and no matter how hard it gets, no matter how rough the road becomes, never give up on yourself or your dreams.

2. I’ve always also said & I maintain it; do not sleep around because your body is too precious & deserves respect. You deserve love & dignity. I’ve always said sex should only happen when you find yourself in a loving relationship, with someone you love & who loves you back. I was 100% celibate until I was ready to share my life with someone and I met the man of my dreams. (unfortunately, I can’t share him with the internet..lol)

Here’s the next thing I want to address.

Most of the people who know me will tell you that I have a heart of gold and maybe that’s why God never stops blessing me. This woman (you know who…lol) has been trolling me for years and calling me all sorts of unprintable names which I have never responded to.

But when she cried out for help last year, despite the abuses I’ve gotten from her, I sent money to her account. I harbor no hate for anyone, no matter what. And I swear I would have sent more money to her if people around me hadn’t stopped me.

I just felt pity for her that she was languishing in prison and no one to help her. And not only did I send money (which I did privately and she made public), I called a few people I know to see what they could do to help bring her out of prison. No matter what, she is a woman, and I am all about women supporting women.

She wrote that I am wearing a prosthetic baby bump…lol. Like I could get away with that in Nigeria? And some folks actually believe it…lol. If I couldn’t have a child, I would proudly adopt. Proudly. I love children so much. But fortunately, God blessed me with a womb to carry my own child.

I was just hiding the baby bump until I got to my second trimester before letting you amazing people know. I could have continued hiding it to be honest but I just couldn’t keep calm…lol. I’ve had the easiest pregnancy with no swelling and no issues and I thank God.

Lastly, here’s something I want to say to everyone. I remember when I bought my house in Banana Island in 2015, many didn’t believe it.

In fact one tweet said ‘If you believe that Linda Ikeji owns a home in Banana Island, I seriously doubt your higher institution certificate’. That’s how much they doubted God’s blessings…lol.”