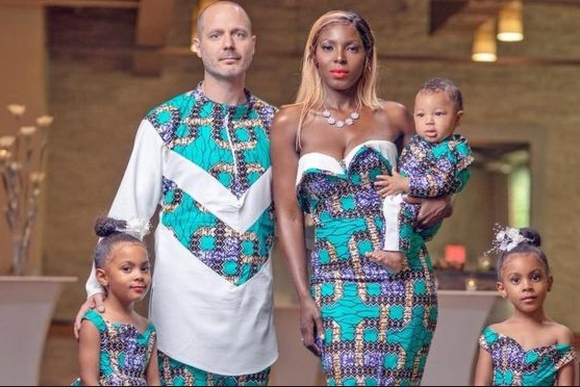 Inspired By Her Daughter, Serena Williams Joins the Fight Against Domestic Violence

These family photos are beautiful in every way! Aminat and Justin McClure, who live in New Jersey, US, recently posted beautiful family portraits to celebrate their family’s mixed heritage with their millions of followers on Facebook, Instagram and Youtube.

This has prompted thousands of people to share their individual stories of what it feels like to grow up in dual or multi-cultured families.

The American couple, posed with their twin daughters and son in West African-inspired outfits to honour Aminat’s Nigerian heritage.

Their 4-year-old twins, Ava and Alexis, wore flowing, princess-style dresses, and the littlest McClure, 7-month-old Jersey, wore an adorable suit in the same turquoise fabric with a purple-and-gold pattern. 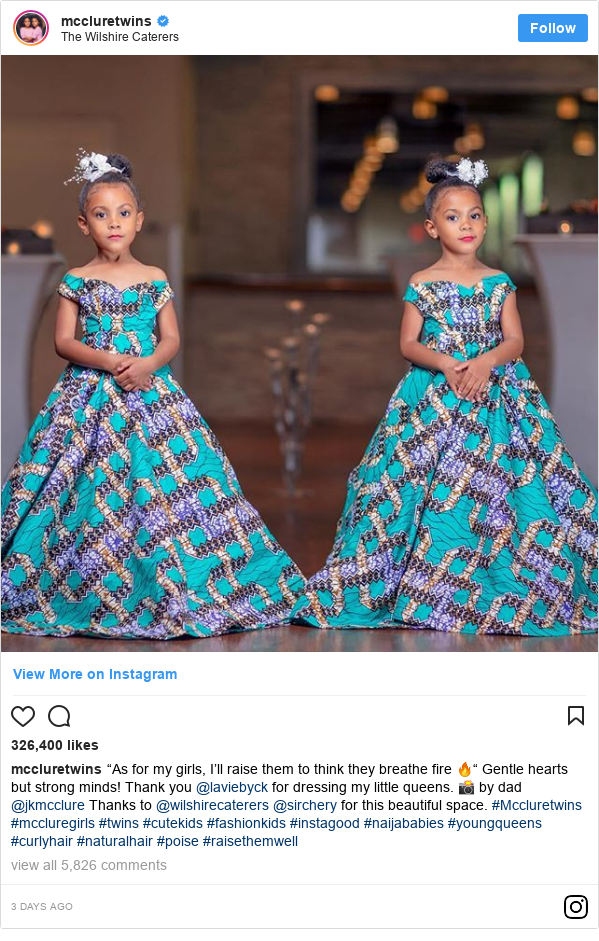 Aminat, 36, was born in Nigeria. The mother-of-3 left Lagos, in south west Nigeria, when her family moved to the US when she was a young child.

According to her, she met Justin in Washington Heights, New York City when a guy attempted to hit on her. Justin had intervened by pretending to know Aminat.  There journey to forever had since begun from then.

In a chat with BBC, Justin disclosed that they wanted to give their twin daughter a lesson about how diverse the world is so they can learn to enrich themselves by opening their eyes to different cultures.

“As a family we like to make bold statements and I wanted to celebrate Aminat’s culture.”

“We just let her do whatever she wanted as far as what she thought would fit best for our family,” Justin, 43, told TODAY Style.

He said he loved this opportunity to celebrate his wife’s heritage. 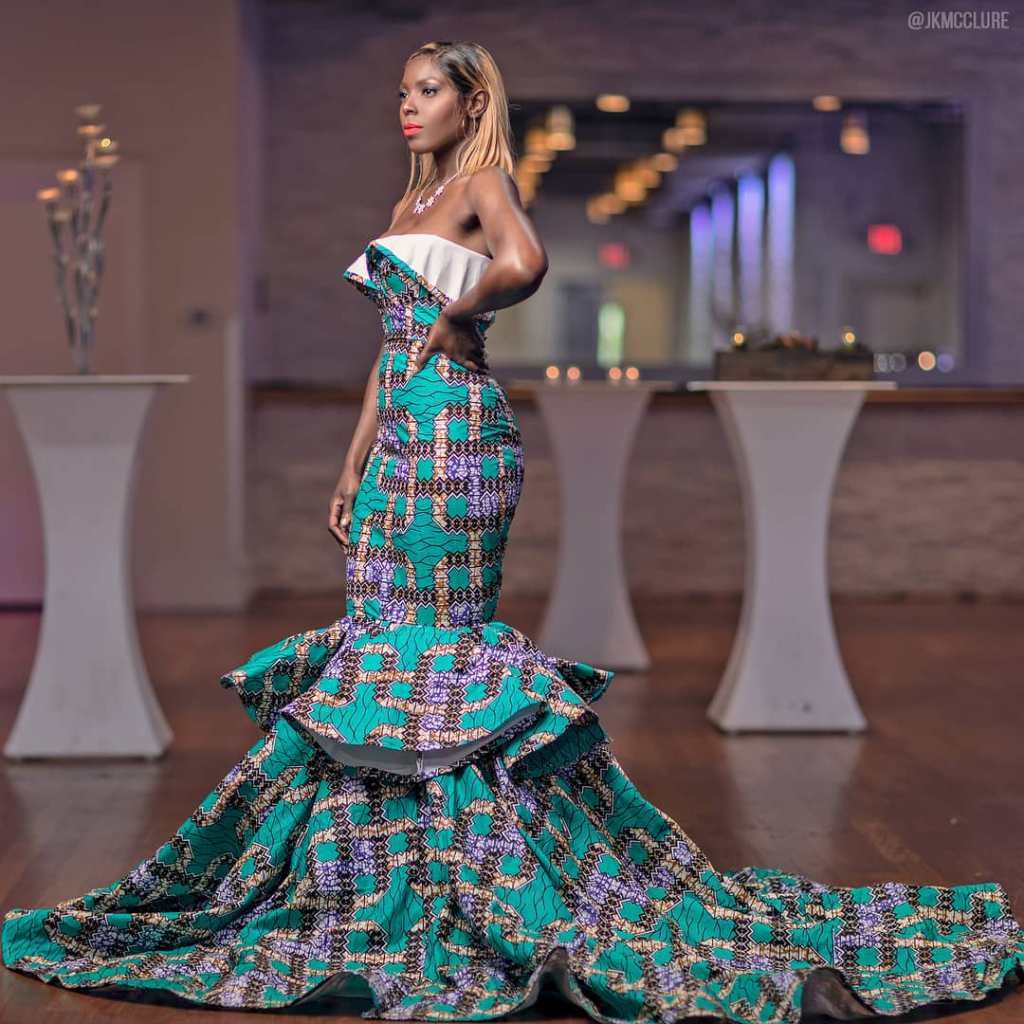 “As a Caucasian man, I embrace my family, I embrace my wife’s Nigerian culture,” he said. “We wanted them to take away how elegant they can be in anything, it doesn’t matter what culture they represent,” he told TODAY.

The couple, whose identical twin daughters already have a large social media presence, posted the picture on Instagram and Facebook where it has been shared more than 15,000 times and attracted more than 69,500 interactions.

The post which was captioned “Celebrate your culture, but also the culture of those you love. Who’s here for this?” has received more than 2,200 comments.

The McClure twins became an internet sensation when their mum, Aminat shot a video of them fighting with their dad, Justin McClure, for eating all their snacks. And everything has snowballed from that moment.

READ ALSO: Is Marriage to a Foreigner One of Inconvenience? Two Men Share Their Thoughts on Facebook

BBC shared that this isn’t the first time for the McClure Family to explore Aminat’s Nigerian heritage by visiting Nigerian restaurants to cook Nigerians such as Nigerian jollof rice and puff-puff. 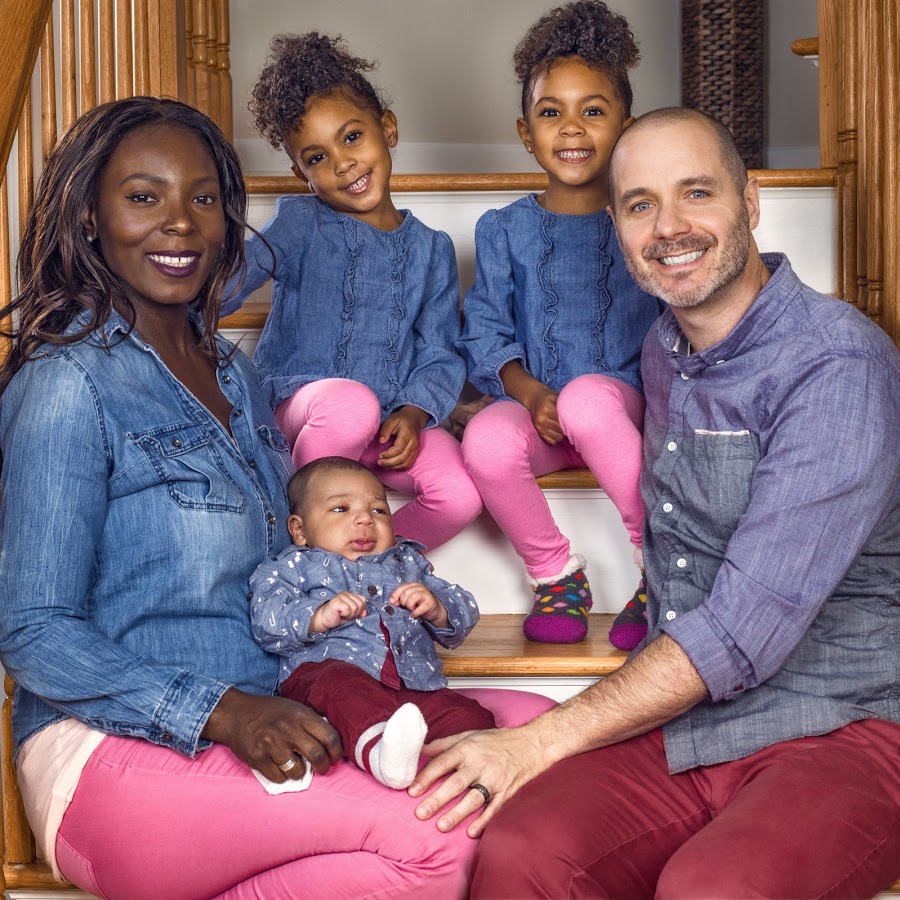 One woman, Renita Cleaver thanked the McClures for showcasing interracial families, explaining that she too is in a “blended family”.

Some people were inspired to share their hopes for raising children who feel connected to both their parents’ cultures and languages.

“This is absolutely beautiful,” writes Facebook user Amber Rose Luna. “I’m an American-Italian woman and my husband is Mexican.

Others remembered family occasions that blended together different cultures. One Liz Poma wrote;

“I love this photo!. My brother got married and his wife is from Ghana. His wife asked us if we would be willing to wear clothing of her country because they wanted us to feel included. Now his daughter is being raised to love and appreciate both of her cultures.”

“My mum is white, married to a Nigerian man and she wears Nigerian dresses occasionally. She embraces his culture so much she even learnt to cook his favourite Nigerian dishes and learnt how to speak his dialect,”