It’s becoming a common knowledge that some women suffer from from postpartum depression after giving birth. Feelings of helplessness, despair, anxiety, suicidal thoughts and not even being able to get up off the couch are common for women, especially new mothers, and as study reveals, in new dads, too.

It’s already well known that fathers do experience postpartum depression, according to Scientific American, and people have known it for quite some time.

One 2004 study found that an estimated 50 percent of fathers were affected by postpartum depression when their wife was going through it, too.

Another report in the Journal of the American Medical Association found that 10 percent of men worldwide showed signs of depression, often referred to as paternal postpartum depression or PPPD, from the first trimester of their wife’s pregnancy through six months after the child was born.

The number spiked to a whopping 26 percent during the three- to six-month period after the baby’s arrival.

“That’s more than twice the rate of depression we usually see in men,” explains James F. Paulson, Ph.D., associate professor of psychology at Old Dominion University, in Norfolk, Virginia, and lead author of the survey, which assessed 43 studies of more than 28,000 fathers worldwide.

“The fact that so many expecting and new dads go through it makes it a significant public-health concern—one that physicians and mental-health providers have largely overlooked,” says Dr. Paulson.

However, a new research conducted at the Indiana University School of Medicine and published in the JAMA, points to new findings about postnatal depression — it’s a lot more common than people would expect. 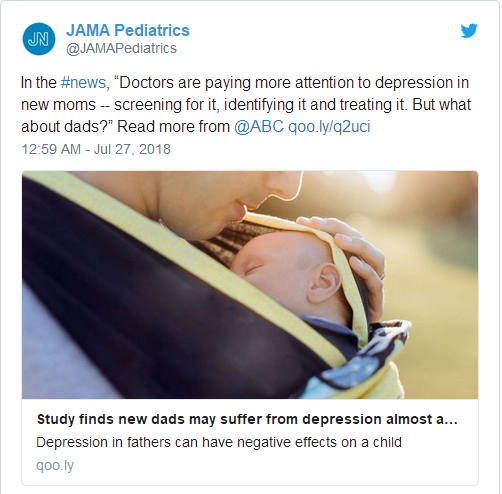 But, since men suffering from postpartum depression aren’t as ubiquitous in media, fathers might not be aware that they are experiencing it themselves, according to MD Magazine.

This is exactly why researchers at the Indiana University School of Medicine wanted to publish this new study, especially since there is so much that researchers still don’t know about males experiencing postnatal depression.

Lead author of the study and Assistant Professor of Pediatrics at the Indiana School of Medicine, Erika Cheng, told MD Magazine:

READ ALSO: Know the Signs: When It Is Baby Blues OR Post-Natal Depression

Although hormonal changes in women are a huge factor for them getting postpartum depression after giving birth, according to the New York Times, a new study published last year found that men’s testosterone levels drop after their partner gives birth, explaining why men might get postpartum depression when they welcome their new child. 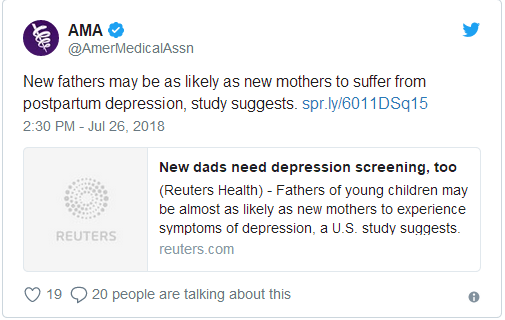 Depression in men often looks different than it does in women. While some men do exhibit classic symptoms of sadness, others become irritable, agitated, or angry, says Dr. Courtenay.

Dads may have shortness of breath, heart palpitations, or full-blown panic attacks. Men may feel worthless; lose interest in sex or activities that used to bring them joy; or engage in such risky behaviors as abusing alcohol or drugs, gambling, or extramarital affairs.

“Guys who suddenly start working 60 hours a week may also be depressed, since immersing themselves in their job is the way many men cope with stress,” adds Dr. Courtenay.

All of the wives interviewed for this story said that the first thing they’d noticed was a personality shift in their husband.

“By the third week, I realized that Dave was going through something well beyond the normal adjusting-to-a-new-baby problems,” says Julie Weber.

“I married Dave because he can make even a trip to the supermarket fun. But he became a shell of himself. He wasn’t sleeping, and not because he was getting up with the baby at night—I did that. He wasn’t eating, and he didn’t want to be around anyone.”

Dave Weber also shared his experience with PPD. He said after his daughter was born, he was blindsided by emotions he’d never experienced.

“I was overwhelmed and didn’t know how to climb out of it,” says Weber, who lives in northern Ohio.

“My wife and I had been so excited to have this baby. We thought we were ready, but nothing went as expected. Instead of a natural birth, Julie had a long, tough labor and eventually an emergency C-section.

Nursing was painful, and the doctors didn’t know why. She kept it up for nine months, often sobbing that she couldn’t do it anymore and she thought she was losing her mind.

I think deep down, I expected her to be the strong one who would always know what to do. I felt like a little boy, terrified because I couldn’t make it better. If she couldn’t take it, how could I?”

Dave Weber finally began to feel better when he was about four months into fatherhood, after he started seeing a therapist regularly and taking an antidepressant.

“He began to enjoy the little things in life again,” recalls his wife. “The smiles and laughter came back. When our daughter was born, everyone said she looked just like Dave, but he hadn’t seemed to care.

Then one day I looked on our computer and there was a picture of them cuddling side by side in our bed. Dave had Photoshopped his goatee on her face. That’s when I knew the real Dave was coming back.”

“The first week, Rob was fantastic with the baby,” says Traci. “But by our second week home, even though he was still doing everything, I could tell he was on autopilot. I finally told him we needed to find out what’s wrong and what we could do about it.”

Sandler found that a combination of counseling, medication, and a supportive group of family and friends helped him gradually feel more grounded.

At first, he went for twice-weekly therapy sessions, then once a week. He and Traci eventually went together every two to four weeks to iron out any problems in their marriage as they cropped up.

“Whenever I would start to have those old feelings, I’d tell myself to take things one day at a time—sometimes one hour at a time,” he recalls. Before long, he was much calmer: “I felt like a different person.” And by the time Asher turned 6 months, Sandler says, he was back to his old self.

“As much as I love my son, life was hell for the first few months,” says Chris Illuminati, of Lawrenceville, New Jersey, who became a stay-at-home dad when Evan, now 3, was born.

“What scared me were the crazy thoughts that ran through my head at 4 A.M. It was always the worst in the early morning hours. What if I just left him screaming like a car alarm and went to bed?

If I was sitting alone with the baby in a dark room, it seemed I was the only person in the world awake. All you have are your thoughts, most of which are, ‘God, I hope this gets better fast, because right now it sucks.’ “