Trying to make sense of her predicament. A young South African woman named Zandile took to Twitter to express her confusion after she received a text from her father demanding she send him some money.

Zandi wrote that her father had called her the previous day and requested that she send him R2000 (N50,900) and when she responded that she didn’t have it, she says he reminded her that he sent her R1 000 (N25,450) four years ago when she was still in school.

After the call, Zandi said her dad sent a text demanding that she return the money at least because he needed it immediately. She says she and her father have not always had a relationship.

”My dad called me yesterday demanding that I send him R2k. When I said I don’t have it, he went on to remind me of the R1k he sent to me back in 2015 (my honors year – only money he’s ever sent me).

She says she blocked his number as she could no longer deal with his audacity. She writes,

”Okay. I’m blocking him now. I don’t get it. You’re AWOL all my life. Try forge some relationship when I’m 21 – which doesn’t last long and now this. My dad’s audacity is unmatched.”

Her post has generated some reactions among her followers. While some said she was right to block him and suggested not to give him a cent of her money, others thought that she should pay back the money he once gave her just for peace to reign and then block him and not speak to him thereafter.

One user remarked that his tone sounded as though he needed the money for something important. Many thought that he was aggressive and could potentially hurt her, cautioning her to be careful. Zandile remarked that she suspected he may be playing game of chance with his money.

”For peace sake send him his money back and block him thereafter. By the look of things he won’t stop until he gets it . I’m so sorry you’ve to go through this especially with someone who’s supposed to take love and take care of you.

He’d be psychotic to think that. The reason for sending the money back is to get to him of her back, because if she doesn’t he obviously won’t stop harassing her.”

“If you decide to give him that money you are more gracious than I would be. But ultimately it’s up to you. Just know you aren’t obligated even after he gave you that money in 2015.”

”Give him his R1000 if you can and then block him. Give him the money not because he is right or you are wrong. Mnike so that it’s clear he never contributed anything to your upbringing. Should he ever need help , ndithi sele encatywa refer him to this R1000.

Be safe sisi. At this rate, he may come over to intimidate and bully you.”

”Tell him you’ll speak to him once he’s done with his tantrum because he’s acting like a teenager right now.”

”Don’t give him a cent. That R1000 was rightfully yours. Nonsense,” One Kate added.

”Your dad may be in some sort of trouble, nobody calls out things like this unless they’re backed up against a wall or they’re just that cold hearted,” another commented.

”Sorry that you have to experience that from your own father. Good thing you blocked him -don’t feel bad about that decision & your decision to not give him money. You are not obligated to give him anything and you don’t need that kind of toxicity or negative energy in your life.” another user wrote. 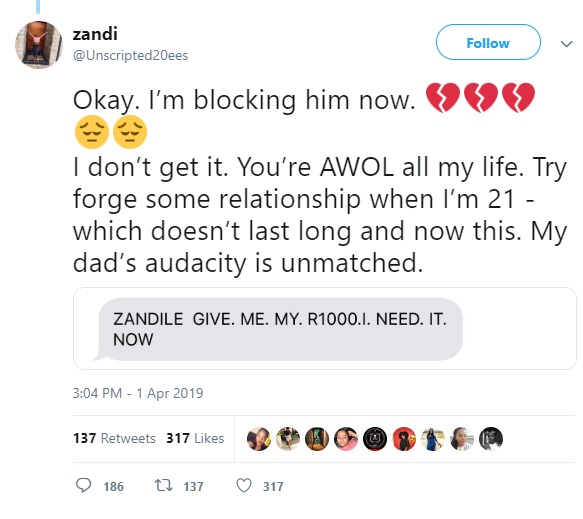