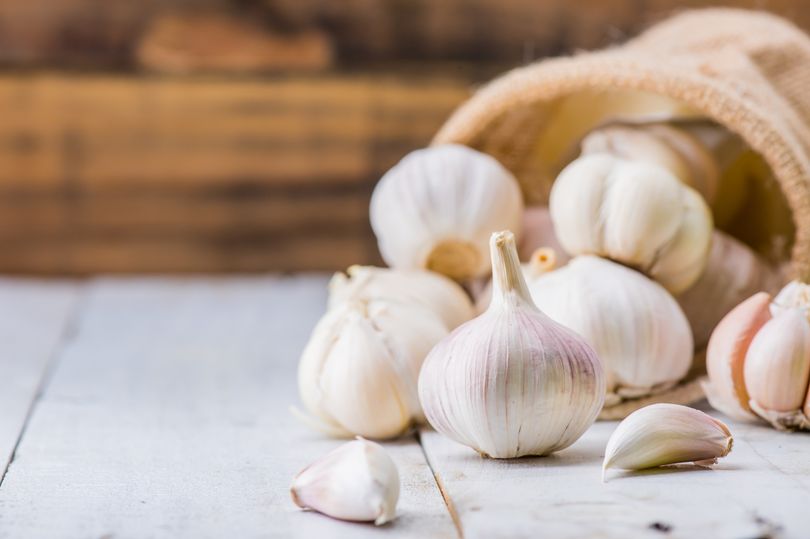 Just when we thought we were done with all the “don’t put this and that in your vagina” memos, we’re back on the case busting another down-there health myth.

In recent time, doctors have warned women not to put cucumber, make up sponges, glitter bombs, ozone gas, wasps nests, and parsley in their lady parts.

But as we think we might finally have learnt we should be leaving our vaginas alone, there’s something else to add to the please don’t put down-there list – garlic.

A prominent gynaecologist and author of “The Vagina Bible”, Dr. Jennifer Gunter is warning women not to put garlic in their vagina as a natural alternative to treat yeast infections — an old wives tale that has apparently been given new life recently.

In a now-viral twitter thread, OB-GYN and fighter of “vagina snake oil”, who is known for frequently challenging dubious medical claims, explains the several reasons why putting garlic in your nether regions is a bad idea.  Dr. Gunter begins in the first of her series of tweets:

“Why you should not put garlic in your vagina. A thread. Garlic contains allicin, in THE LAB it MAY have antifungal (i.e. anti yeast) properties. This is in a lab, not even in mice. Just a dish of cells. Your vagina is not a dish of cells.

Lots of vaginal garlic aficionados (I SHOULDN’T HAVE TO TWEET THAT IN 2019, BUT HERE WE ARE) recommend inserting a clove. This means they don’t understand for allicin to be released garlic has to be cut or crushed. Sigh.

So for garlic to work you would have to crush it and stuff it up somehow. There is still the dirt thing. And the cut up garlic on raw tissues thing (OUCH). And the fishing of the garlic out by the gyno thing. #vaginaisanogarliczone.”

The gynae goes on to list some of the other potential dangers garlic can cause, including biofilms and pain when it comes in contact with raw tissues in the vagina.

“The placebo effect is strong. If you think vaginal garlic is going to make you feel better, you may very well feel better temporarily.”

READ ALSO: Discharge Down There: See What’s Normal & What’s Not

The sexpert also claims that most women (50-70 percent) who self treat for a vaginal yeast infection, never even had one to begin with, so you may be causing yourself unnecessary damage.

”As 50-70% of women who self treat for vaginal yeast never actually had a yeast infection you can’t say much, except half of them never had yeast to begin with so the irritation they had may have been a temporary thing and resolving wasn’t garlic related #vaginaisanogarliczone.”

The rise of the pseudoscientific idea that women’s vaginas need any kind of maintenance angers Dr Gunter and her aim is to stop and tackle the cycle of misinformation aimed at women, often by women.

”My advice, do not take medical advice from anyone recommending vaginal garlic for yeast or anything else.”

As she told Oprah magazine after this thread blew up yesterday:

My anger is at the things that made a woman feel that desperate that led her to do that. I want to give them the education so they know topical antifungals – which you can get over-the-counter – are very safe.

Also, I want women to have medicine not myth and magic. Demanding facts and science is the most empowering position.

What is a yeast infection?

Yeast is a fungus, so yeast infections are basically fungal infections. The vagina usually contain some yeast, but when that yeast multiplies too rapidly, things get uncomfortable.

It produce an odourless, thick, white, and chunky fluid—the infamous “cottage cheese” discharge, with accompanying symptoms as itching in the vulva, along with redness, swelling, and burning while urinating. 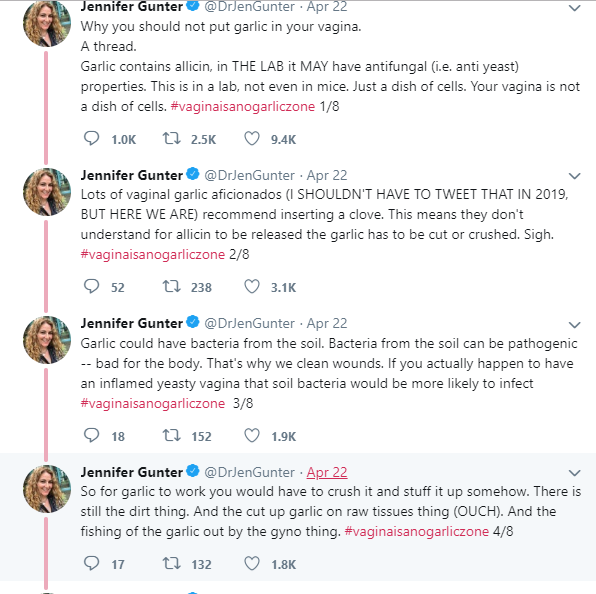