A former HIV/AIDS ambassador in Ghana, Joyce Dzidzor Mensah who is also a mother of three young children has declared marriage is not for everyone and she falls in the category of such women who will not be able to have a working relationship defined by marriage with a man, despite having being married three times in the past.

Joyce, in a post on her Facebook page, said that as a ‘man-woman’ it would be outright impossible for her to partner with any man under the umbrella of marriage and advised other women to check themselves and determine if they are more male than female before they jump into a marriage with a fellow man.

READ ALSO: Actress, Nse Ikpe Etim Reveals Why She Will Never Be Able To Biologically Have A Child

While the idea of marriage no longer sits well with the mum-of-three, she says having a boyfriend is cool, especially if he stays at a far distance and they will get to see each other every once a while, instead of living together.

She went on to talk about how she is not invested in the things that women typically do, such as carrying purses, and fixing artificial hair and lashes. Joyce concluded saying marriage is complicated and she does not like to be controlled.

Read all she had to say below:

Marriage is not meant for everyone. Especially, some of us who are men in women body.

Cool to have a boyfriend who stays very far from me and see each other in a while than to live together.

Two men cannot live in one room as husband and wife. It will not work.

Check yourself and see if truly you’re a complete woman or the male hormone in you is much greater than the female hormone before you jump into marriage with your fellow man.

I don’t know how to wear ladies shoes

I don’t know how to hold ladies bag. Who has ever seen me with ladies bag?

I don’t know how to fix artificial nails and eyelashes. 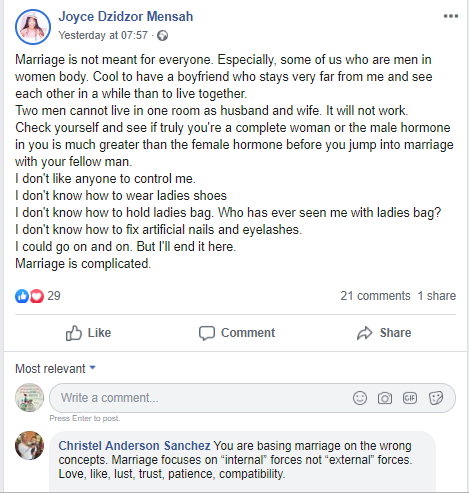