Technology has done a lot to make our lives easier and more efficient. Yet as a parent, you ought to weigh the possible impact a device, such as smartphones could have on your child.

At a time when it is becoming commonplace for young children to have their own mobile device, you should be worried about the negative impact the misuse of gadgets could have on your child’s growth.

A Nigerian mom-of-four, Dr.N‏ @Nenabekee recently took to her twitter handle to educate parents on how to build a gadget-free home. In her tweet, Dr. Nena opines that parents should not give smartphones to their kids who are under 15.

According to the author and blogger, giving children phones at an early age, sometimes pre-exposes them to so many dangers like depression.

She went on to speak against parents who are in the habit of giving their young children their phones to play with. In her words, parents should from a young age, train their kids not to play with their (parents) phones. She further advised parents to introduce alternatives like engaging toys, books and so on.

See her arguments and some reactions below…

”Children and Phones. I have 4 children aged 2-8. 2 years ago, we spent some time with relatives. I was shocked that almost every child grabbed my phone the minute I put it down and began to search for games. My own children were like fishes out of water. They couldn’t relate.

I eventually had to hide my phone for peace to reign but the minute I forgot it on the couch, someone would leap at it. This was strange because in my house, phones are personal. If it rings, you bring it to the owner. That is the only reason a child should touch my phone.

If you already have teens or older kids who won’t get off the phone you bought, this may not be for you. But if you are just about to start a family or have babies (0-3) I want to encourage you not to allow them access to your phones. Do not buy a phone for a child under 15.

A child 11 and above may require a non- smart phone for security reasons. However, I hope you would have built in him the inner strength to survive social media. Adults are depressed by social media, how do you expect a teenager with identity and self-image crises to cope?

How to build a gadget-free home

1. Agree with your spouse

2. From a young age, do not give them your phone to play with. Keep it out of sight

3. Introduce alternatives like engaging toys, books and so on

4. Take them outside to play

6. Join them occ but also encourage them to invent on their own

7. Once they can read, teach them to read to their dolls and teddies

8. Coach them to act. If you are a Christian the bible is full of drama

Let them clear up after themselves, polish their shoes, dress beds, sweep the floor, arrange books, water plants e.t.c These are all fun activities. When mine are tired of all that, I make them write about what they just did. We also have singing and dancing competitions.

Quoting scripture from memory, who can keep quiet longest, most helpful e.t.c Sometimes I reward them but other times a thumbs up is enough. We watch selected cartoons only a few hours on weekends and holidays except I am very busy and need space.

I also taught them to pray early so in the car on the way to school every morning, each child prays 1 day of the week. What has been the benefit?

3. They get along with teachers cause they respect authority.

5. It is easy for domestic help to enforce my rules

6. My phones are safe

7. Healthy self-esteem And many more.

This is just to encourage new parents out there. Let’s raise children who will thrive. You can see it’s a jungle out there.

Giving a child everything he cries for as well as everything you never had is like feeding a crocodile meat in hopes that it will become a vegetarian later (I saw this proverb in a tweet and thought it was so apt) Be encouraged. You’ve got this.”

Children and Phones.
I have 4 children aged 2-8. 2 years ago, we spent some time with relatives. I was shocked that almost every child grabbed my phone the minute I put it down and began to search for games.
My own children were like fishes out of water. They couldn't relate 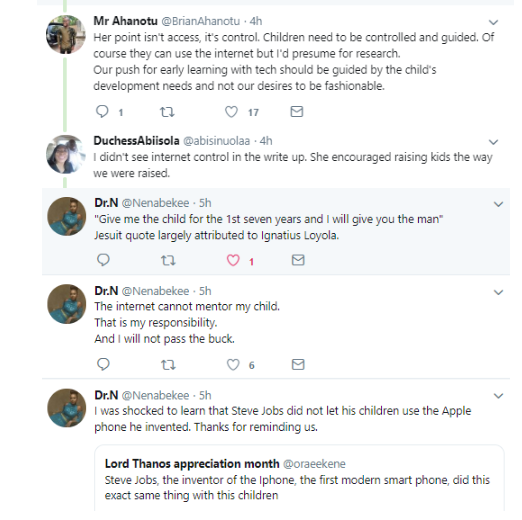