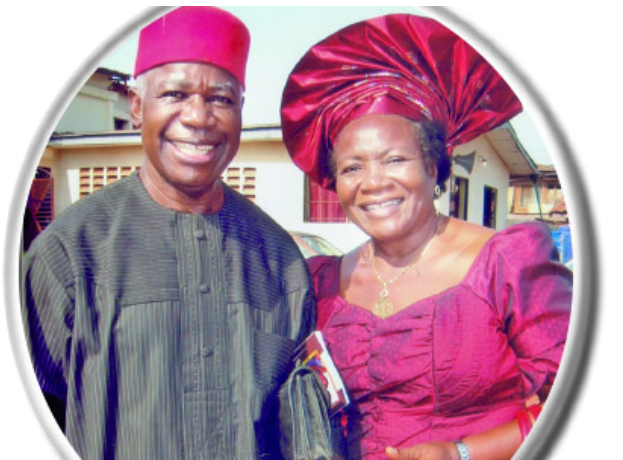 Nse Ikpe -Etim On Why She Won’t Bother Adopting

Chief Umeh, a retired Deputy General Manager and the First Nigeria Chief Inspector in Union Bank, and his wife, a Retired Deputy Manager in the same bank, have been married for five decades and their union has produced six children, two males and four females, and grandchildren.

In an interview with Daily Sun, the duo revealed the secrets of their 50 years of marital bliss and It Is Applaudable!

Fifty years of marriage, how has it been?

Husband: It has been all well, no regrets, and by the grace of God, things have been moving on fine. I feel comfortable and I feel very happy, and I have every reason to give thanks to God for what He has done for us.

Chief said it has been well, how?

Wife: Since we got married, we have not had any cause to regret being together; we have been happy throughout. We don’t fight. Anything he says, if it is okay, I would accept. If I have any objection, I would keep quiet and later ask: why this decision? He would just explain and both of us would work together in that direction. I don’t have any cause to regret marrying him; he has been a wonderful husband, a very good father.

Husband: I met her in the bank; both of us were working in the Barclays Bank, now Union Bank.

When he approached you, what was your response?

Wife: First of all, I had a lady friend living with me. She and he were unionists in the bank. So, when he came to our house, both of them would be discussing trade union issues, and I didn’t know it was because of me that he was coming there. As they were talking about trade union issues, I would leave the room for them.

That lady was in Owerri branch of the bank; when she was transferred to another town, near Owerri, I was the only one living in the room. As usual, he came around, and I told him that my friend is no more living with me, she has been transferred to another branch, but he said no, “it is you that I want, I came for.” From then, we started knowing each another. That was how it started.

When he came, did your parents accept him or did they raise objection?

Wife: They accepted him wholeheartedly.

What was the first attraction?

Husband: I met her at Abba in Nkwerre, in present-day Imo State. Towards the outbreak of the civil war, Aba, Port Harcourt and Owerri branches were merged and moved to Aba. The first attraction was that she was Miss Umeh, and I was curious to know who this Miss Umeh was because my surname is also Umeh––Up till now, she has not changed her surname, her signature.

She is Mrs. P. N. Umeh. Not only that, I made up my mind that somebody that was going to be my wife, must have the following qualities– the height, the colour, the educational background. I checked these things out and she fitted into the template, and that made the whole thing work out just like magic.

When he proposed, was there anything in him that attracted you too?

Wife: Yes, he was young and handsome. These were some of what attracted me when he came. Again, he was soft spoken and was not rough.

SEE ALSO: Muslim Couple, Eze Abdulfatah And Ugoeze Fatimah Gleefully Share The Secrets Of Their Successful Marriage That Has Spanned More Than 40 Years

Within these 50 years of marriage, what is that memorable thing, moment?

What can you identify as the most striking thing that has happened to you in these 50 years of marriage?

Husband: It is very difficult to mention or say this is the particular one or the other. If you have regrets, then you can say this is not right, but no regrets at all. When I was working, I worked in the Inspection Department of the bank, she kept the home, our six children, two males and four females, without somebody knowing that I wasn’t even around.

Like my wife said, the first child, Obiagheri was born in this very Umudege village, Igbo Ukwu, in 1970, immediately the war ended. So, it is very difficult to say this is the most striking thing within these fifty years.

We are not angels; we are still human beings. Were there times something happened that you cursed the day you set your eyes on her?

Husband: I can’t remember any such moment; it is completely out of it. I cannot say that this is a day I regretted marrying her, no.

What are those days, maybe if things were not working the way they should, you started asking yourself why you got into this marriage?

Differences are bound to occur, how do you reconcile?

Husband: Even a quarrel, before you talk of big.

What is it that made you people not to quarrel?

Husband: It is the grace of God.

Wife: It is the grace of God, and I can’t even remember when we quarrelled or shouted at each other as to make people ask: ‘what are they doing and what is going on?’

What is your idea of reconciling differences if they occur?

Husband: Talking it over. Dialogue is the best way of reconciling differences. Do not say what you are not supposed to say because when you are talking, things would be coming out. Therefore, whatever is the case, they should go into reconciliation. That is what I tell couples when they come to me for counselling or when they have problem. I tell them that the only thing they have to do is to talk it over between them.

Tell us the secret of why this marriage has lasted these 50 years?

Wife: One of the things that destroy marriage is suspicion. He was in the Inspection Department for many years, which made him to travel all over the country, and I was at Aba then and Lagos. Some men would suspect their wives that they would do this, or the wives would suspect that their husbands go out with other women.

There was no such thing between us. I know that if he goes out, he would come back, and there is no problem. So, that suspicion is not there; this is one of the reasons many marriages collapse. Some wives when their husbands come back from work or from a trip, they would jack them and ask, ‘how many women did you sleep with, while you were away?’ Once there is no suspicion, the marriage would move on very well.

Husband: There is no suspicion. Again, there was no interference from her parents and my parents. Whatever that can cause trouble we avoid such thing. I have no reason to suspect anything.

What advice do you give to some couples who feel the heat in their marriages is much, and feel like ending it, and others who out of fear don’t want to marry?

They will never deceive you. Gossip is the worst thing. Avoid gossips, and avoid friends that gossip because you have friends and you have real friends. You have gatecrashers who would come to destroy things both on the part of men and on the part of women; they are there, avoid them.

Again, two families are never the same, don’t say that this family is like this and you are going to be like them. Plan your own; work out your own, live on with your own according to what you think is the right thing.

These days, some girls prefer to get married to a man whose parents were dead, what advice do you have for such ladies?

Wife: I can’t imagine a girl saying that she prefers to get married to a man without parents.  When I came in here, both my parents-in-law were alive, and we related very well. If you see me with my mother in-law, you would think that I was one of her children.

My husband is the only male child and has five sisters, when you see me with those five sisters; you won’t even know that we are not sisters; except you were told. People think we were sisters because we are so united, knitted family. For someone to say she prefers a man without parents is not right because when you go in you learn a lot from them.

My mother-in-law and father-in-law would sit here, we would be talking and discussing and I was learning so many things from them. If you see how we cracked jokes here, you won’t know that I was a daughter-in-law. My advice to them is that they should take life as they see it.

If you enter into a family where the mother and father of the man are still alive, you take them as your own parents. Don’t regard them as other people. Once you do that, there won’t be any problem from them or from your husband. So, take it cool when you get married. Make friends with everybody in the family. Take them as your own.

What advice do you have for some wives who refuse their husbands sex as a way of getting back at them when they were offended?

Wife: If your husband annoys you, the same thing my husband said now, you dialogue, and reconcile the issue. I don’t feel it is the right approach.

Husband: You should not deny somebody of something the person is entitled to.