Want To Make Your Marriage Quarel-proof? Get The Tips From Ex Bankers, Mr & Mrs Umeh As They Share The Secrets Of Their 50 Years Marital Bliss

Pretty and petite Nigerian singer, Simisola Bolatito Ogunleye, professionally known as Simi has condemned the notion that a woman should be respected just because she is married.

Expressed her disgust for popular defense lines of “how can you talk to a married woman like that, You can’t do that to her. Do you know she’s married?”, the singer who married her colleague, Adekunle Gold in private ceremony in Lagos in 2018, stated that marriage does not elevate the value of a woman and that every woman, regardless of her marital status must be treated respectfully.

Simi also pointed out that such questions implies that disrespecting single women is excusable. According to her, a woman’s worth should be based on the good that she does and the value she adds.

Below is her tweets…

”Hate when people defend women with “how can you talk to a married woman like that?” “You can’t do that to her. Do you know she’s married?” I know u mean well, but you’re implying that disrespecting single women is excusable. We gotta change that.

Marriage does not elevate the value of a woman. Every woman, regardless of status, must be treated respectfully. Some married women also need to erase this idea that they’re more special. You’re really not sis. Your special is in the good that you do and the value you add.”

READ ALSO: Nigerian Singer, Simi, and Ghanaian Counselor, Dr. Charlotte Oduro, Go Back And Forth On What A Cheating Husband Deserves 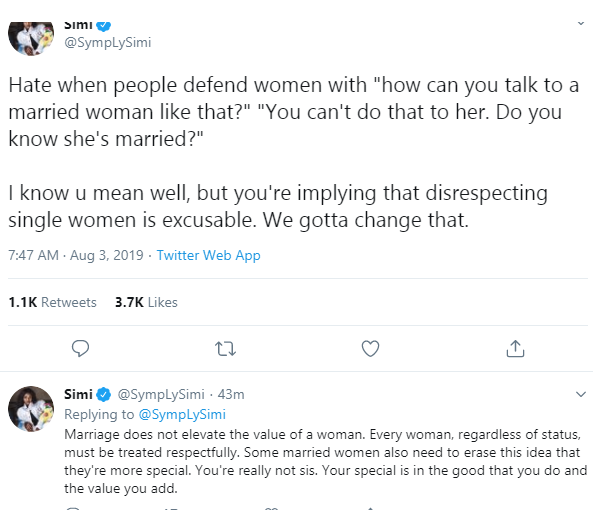